Hearing implant manufacturer Cochlear's underlying earnings have stagnated, with falling sales of acoustic devices chipping away at gains in its core implants business.

The $14 billion company on Tuesday reported an underlying profit of $132 million for the six months to December 31, flat on the same period a year earlier. 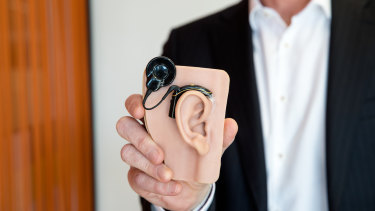 Statutory profit was boosted 23 per cent higher to $157 million by the revaluation of Cochlear's innovation fund, which makes small investments in companies developing new technology that might improve Cochlear's products.  The consensus of analyst forecasts was for net profit of $140 million.

Sales revenue was 9 per cent higher (or 5 per cent without the impact of favourable currency movements) to $777 million for the half – below market expectations of $790 million – with Cochlear implants up 14 per cent but acoustics and bone conduction devices falling 9 per cent.

Cochlear chief executive Dig Howitt said that new device, the Osia 2 System, was receiving an "enthusiastic response from surgeons and patients over the past few months" and would drive category growth. 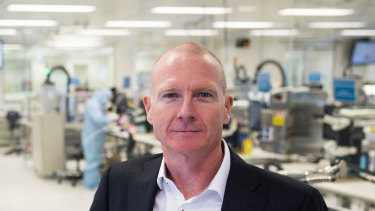 However acoustics sales would continue to be under pressure until the device has been approved in Europe, he said.

Cochlear last week downgraded its full-year profit outlook by $20 million, to $270 million to $290 million,  due to the coronavirus outbreak causing surgeries to be delayed across China to avoid possible infection.  That will represent full-year profit growth of 2 to 9 per cent.

"While we face some near-term challenges with the coronavirus and with delays to the approval for the Osia 2 System in Europe, our view to the longer-term opportunity to grow our markets remains unchanged," Mr Howitt said.

“We expect to continue to deliver growth in revenue and earnings in the coming years, underpinned by the investments made in product development and market growth initiatives."

Cochlear declared an interim dividend of $1.60 per share, an increase of 3 per cent.