WASHINGTON ― With just hours to go until a government shutdown, congressional leaders were scrambling Friday to pass another short-term funding extension to give lawmakers more time to finish a coronavirus deal and a federal spending bill that conspicuously have yet to materialize.

Days of disagreements and drafting hiccups have suddenly threatened the fragile relief bill, with some Republicans opposed to the structure of stimulus checks and looking to constrain the Federal Reserve’s lending power. New restrictions on the Fed could hamper the incoming Biden administration’s ability to respond to financial challenges, and could lead to a further economic downturn.

Republicans are also concerned that Democrats are trying to use money for the Federal Emergency Management Agency as a backdoor for state aid, after Democratic leaders agreed to hold back on state and local funding in exchange for Republicans dropping their liability shield for businesses bringing employees back during the pandemic. Leaders from both parties have tried, to no avail, to assure the other side that they’re not trying to pull a fast one.

But by late Friday afternoon, it was clear lawmakers wouldn’t be able to deliver legislative text of the compromise in time to avert a shutdown, prompting the House to move forward with a two-day continuing resolution. That would give lawmakers more time, but there’s no guarantee that such a short-term measure would pass the Senate, as disagreements over one of the biggest flashpoints ― namely, stimulus checks ― has ground the chamber to a halt.

Negotiators had settled on $600 in direct payments, but Democrats have said all along that they’d be happy to include more. And White House advisers had to stop President Donald Trump this week from inserting himself into the negotiations and advocating for checks of up to $2,000.

On Friday, Sen. Josh Hawley (R-Mo.), the lone Republican senator pushing for more robust stimulus checks, tried and failed to force a Senate vote on another round of $1,200 direct payments.

Objecting to Hawley’s request was his own GOP colleague, Sen. Ron Johnson (R-Wis.).

Johnson, who has dismissed concern about the coronavirus as “mass hysteria” and baselessly promoted unproven and potentially dangerous treatments for the virus, cited the ballooning deficit in his stand against Hawley’s proposal. The deficit has become the GOP’s go-to excuse for denying additional relief to unemployed and struggling Americans, despite having approved a massive pot of money that primarily went to large businesses earlier this year.

“It takes our debt from $27.4 trillion to $28.4 trillion in a couple months with doing virtually no revisions, no improvements,” Johnson said of Hawley’s proposal, calling instead for additional funds to go to small businesses. The current proposal would add more than $250 billion in small business loans, though lawmakers are still divided on setting an eligibility criteria for those loans.

“We’re getting ready to spend apparently another $1 trillion more, and yet working people are told they may be last — if they get relief at all,” Hawley, who has partnered with Sen. Bernie Sanders (I-Vt.) to lobby for the checks, said in response to Johnson on the Senate floor.

The infighting between Johnson and Hawley could have bigger implications. A frustrated Hawley left the Senate floor Friday threatening to block a temporary spending bill to keep the government open over the weekend, meaning that even if the House passes a short-term bill, Hawley could prevent it from getting to Trump’s desk. 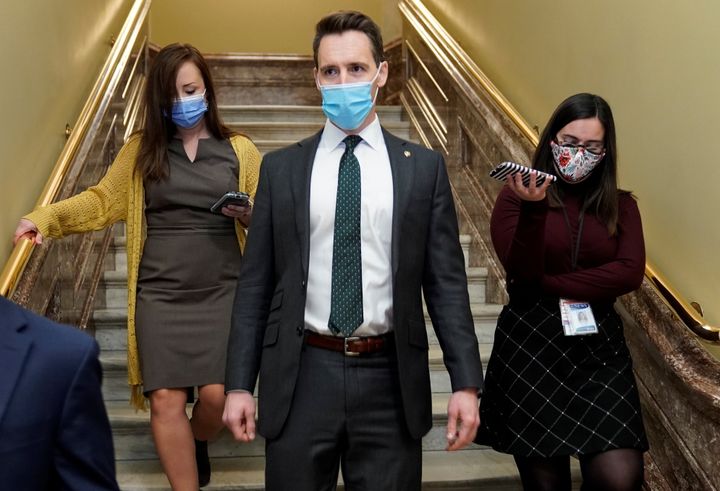 “I’m not willing to just sit by and be told nothing and be given no information and just be asked to do as you’re told,” Hawley told reporters. Hawley and Sanders are expected to attempt to force another vote on their proposal Friday evening.

On the House side, progressives seem to be preparing to vote against the deal as they push Speaker Nancy Pelosi (D-Calif.) to demand more from Senate Majority Leader Mitch McConnell (R-Ky.).

Rep. Alexandria Ocasio-Cortez (D-N.Y.) railed against Republicans and the emerging deal Friday, telling HuffPost that Democrats need to be more forceful in pointing out who’s standing in the way of a bill that would deliver larger stimulus checks and more money in unemployment benefits.

Ocasio-Cortez added that Democrats need to push back against “this ‘both sides’ bullshit.”

“There’s a window here,” she said. “And, you know, I’ve heard murmurs that Mitch McConnell is actually sweating behind the scenes because he wants to protect [Georgia Sens. Kelly] Loeffler and [David] Perdue. But it’s like, if he is actually sweating, then they need to cash in real checks.”

Presented with Ocasio-Cortez’s comments, McConnell’s office did not have an on-the-record response.

Republican leaders negotiating the COVID-19 relief bill have been adamant about keeping it under $1 trillion — an arbitrary cap that Democratic and Republican lawmakers agreed to earlier this month. But as negotiations continue, it’s clear that funding for provisions like the checks and unemployment insurance aren’t the only issues. Republicans are also pushing for language that Democrats say will make additional relief next year more difficult.

Democrats made a show Friday of complaining that Republicans are insisting on disallowing the Federal Reserve from making the kind of loans that lawmakers authorized in March as part of the Coronavirus Aid, Relief and Economic Security Act. Democrats say the Republican measure, by Sen. Pat Toomey (R-Pa.), has far wider implications than just winding down CARES Act programs that were supposed to end this year anyway.

“Proposals to sabotage President Biden and our nation’s economy are reckless, they’re wrong, and they have no place in this legislation,” Sen. Elizabeth Warren (D-Mass.) said, in one of a flurry of statements from Democrats.

But as of mid-November, the Fed’s emergency programs had used only 1% of their lending capacity after Congress ponied up $454 billion to leverage nearly $2 trillion worth of loans, according to a recent report from the Government Accountability Office.

The Federal Reserve isn’t the only sticking point. Lawmakers are still hashing out smaller details, including on unemployment insurance. An earlier iteration of the deal would have extended federal unemployment insurance programs for 16 weeks, though that got shortened to 10 weeks as of Wednesday, in order to offset the cost of another round of stimulus checks.

Kevin Shaquann Richardson of Washington, D.C., said that except for a brief period over the summer, he’s been furloughed from his job with a catering company since the pandemic started. He doesn’t think business will pick up enough for his employer to call him back until next fall.

Richardson, 50, will lose his income if Congress can’t reach an agreement. The current deal would reauthorize the Pandemic Emergency Unemployment Compensation program, which is scheduled to expire on Dec. 26. With the reauthorization, Richardson would receive benefits for another seven weeks. Lawmakers have indicated they’ll add the 10 weeks and increase payments by $300.

But Richardson has no idea if he’ll be able to return to work before his benefits run out, even with the extension. He thinks Congress should make the supplemental $300 retroactive, so unemployed people would receive a lump-sum check for the weeks they went without a supplement. He’s behind on his rent, and he’s disgusted with Congress.

“They’re arguing over money that doesn’t belong to them,” he said. “They work for us. We don’t work for them. But we’ve got to argue with them, hold rallies, send nasty emails, just to get these people to open their small-minded brains.”