Troubled listed jewellery retailer Michael Hill has declared the coronavirus crisis as an "opportunity" to bolster its online offering and slash its rental costs despite fronting a massive sales drop throughout March.

However, it said it would still be forced to take drastic action to protect its business against a prolonged downturn, including pausing repayments to any former staff who were underpaid $25 million last July. 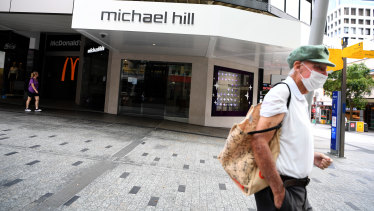 Michael Hill believes the virus crisis could create opportunity for its business.Credit:Dan Peled

On Friday, the company provided a preliminary glimpse into the coronavirus’ devastating effect on the retail sector, telling investors comparable sales for the third quarter dropped 10.4 per cent at its 162 Australian stores.

This was despite sales tracking up 1.8 per cent at the end of February, showing the virus-induced downturn in March was enough to turn the entire quarter’s sales sharply negative.

Michael Hill was the first listed Australian retailer to close its doors in response to the virus, shutting all 300 locations across Australia, New Zealand and Canada and standing down 2500 staff. Numerous others, including Myer and Solomon Lew's Premier Investments quickly followed suit.

The decline comes as a blow for the historically-troubled Michael Hill, which was in the midst of posing a turnaround under the new leadership of chief executive Daniel Bracken. Sales and earnings had both shown healthy growth at its half-year results in February.

Stores will re-open as soon as "local laws, public health guidelines and consumer demand dictate", the company said, though Mr Bracken said a significant repositioning of the business was also in the works.

"The crisis has afforded us the ability to really focus on our digital business and we will emerge with a much bigger and stronger offering," he said.

"A crisis always creates opportunities ‐ the combination of strong performance leading into the crisis and the decisive actions we are taking to preserve cash and strengthen our balance sheet will leave us well positioned." 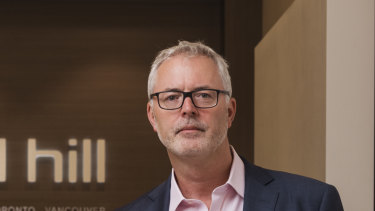 Online sales at the retailer jumped nearly 50 per cent for the quarter and new initiatives, such as direct selling and digital catalogues, were being trialled, Mr Bracken said.

The merchant is also in discussions with landlords over ongoing rent abatement following stores re-opening, as it expects to re-open to a "more subdued trading environment" and is pushing for rents to reflect this.

However, underpaid former staff will continue to be left hanging for repayments as the jeweller said it would pause its remediation program to help preserve cashflow. Interest will be paid on all amounts owing, and the company noted existing team members had been largely repaid.

The company has implemented other cashflow-preserving strategies to help it survive the downturn, including cutting executive remuneration and laying off some support staff.

Shares were trading up 1.4 per cent at 36 cents just before midday.