Nine Entertainment Co will pay a final dividend of 5.5 cents per share after more than doubling its full-year profit to $184 million.

In results posted to the ASX on Wednesday morning, Nine said its revenue for the recently completed financial year climbed 8 per cent to $2.3 billion. Earnings (before, interest, tax, depreciation and amortisation) were up 43 per cent to $565 million, driven by a sharp rebound for its broadcast television business.

Nine owns The Sydney Morning Herald and The Age, a television network, radio network, streaming service, Stan and has a controlling stake in digital-real-estate website, Domain. 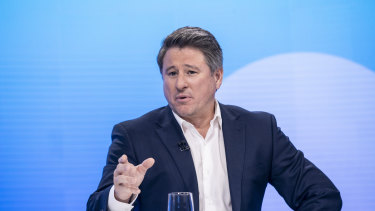 After excluding one-off items and minority investments, profit came in at $261 million, ahead of consensus analyst forecasts for $255 million.

Nine chief executive Mike Sneesby said the company had been able to execute its long-term strategy despite economic factors caused by COVID-19.

“Our Television and Publishing businesses have both reached critical inflexion points,” Mr Sneesby said. “With the foundation of Nine’s unique assets, strong cash flows and a supportive Board, we have a clear vision for the future as Australia’s media company.”

Nine’s streaming service Stan, which contributes a large amount to the company’s market value, reported 2.4 million active subscribers for the full year, 250,000 of which were subscribers to the sports package.