A lawyer for Crown has argued the organisation is still fit to hold a casino licence in Perth as the company made a final plea to a Royal Commission in Western Australia.

But submissions by the state’s gambling regulator on Tuesday urged the commission show no sympathy for the company or its staff in handing down its findings next month. 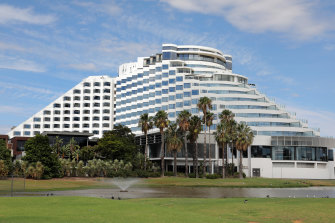 Issues of money laundering at the Perth casino – as uncovered by The Age and Sydney Morning Herald – were central to previous inquiries in both Victoria and New South Wales.

The inquiries found Crown was not suitable to hold a licence in either state, but the company was given a two-year probation to run its Melbourne operation.

Crown’s lawyer Kanaga Dharmananda SC told the commission on Tuesday it should consider the current arrangements at the company and not past actions.

“It is not about perfection because there would be few institutions, religious or otherwise that would pass muster under a standard of perfection,” he said.

“The assessment must be holistic and not atomistic.

“Crown has a very different and improved corporate culture and risk management today.

“The PCRC should be satisfied there is the competence, commitment and resources required to drive Crown’s reforms to their conclusion.”

A lawyer for the state-run Gambling and Wagering Commission, which regulates the industry in WA, said his organisation’s position was not to say that Crown’s culture was so flawed as to be irredeemable.

“What we say is that it is important for this commission to engage with the reform program as to whether it offers the real prospect, with a high level of confidence, that both changes in leadership and changes in systems will produce consistent compliance behaviour across the organisation,” GWC lawyer Paul Evans said.

“GWC urges no sympathy for Crown or any past or present Crown officer, nor indeed – regrettably to the extent that it may be necessary – … departmental officers or former members of the [Gambling and Wagering] Commission.”

Mr Evans also lamented the GWC’s limited resources as a regulator and whether Crown had been able to bring about change below management levels.

“The concern that we’ve identified … is this is a large organisation,” he said.

“Much of what is done is not done by management, it’s done at a level below management and management may have changed but have they instilled change in the individuals who will actually implement those changes and make them effective at operational level?”

Conflict of interest management did not meet expected standard

Fishing trips and friendships between the former chief casino officer Mick Connelly and Crown staff, as revealed last year by 6PR’s Gareth Parker, were one of the issues covered throughout the Royal Commission.

Mr Dharmananda told the commission there was no evidence Mr Connelly and the Crown staff had done anything wrong.

“In retrospect, more could and should have been done to manage the perception of a conflict of interest to arise,” he said.

Fiona Seaward, a lawyer for the Department of Local Government, Sports and Cultural Industries – which also has a major role in casino oversight in WA, told the commission the department accepted more could have been done.

“The department has accepted and accepts today that its historical management of conflicts of interest was not at the standard expected of a modern public sector organisation involved in regulation,” she said.

“The department has taken a number of steps to address this issue.”

In February last year, the department asked its officers to disclose any personal relationships or close friendships with staff at Crown Perth. New conflict of interest guidelines for the department were developed in August and a centralised register of declared conflicts was created.

Mr Connelly is no longer the chief casino officer and the department is onto its fourth person in the role over the past year.

Department of Water and Environmental Regulation bureaucrat Germaine Larcombe was in the role for six months, but the contract lapsed and the job was set to be taken over by Jennifer Shelton who was also the new executive director for the racing, gaming and liquor unit at DLGSC.

DLGSC also has only an acting director general in Lannie Chopping, who has not been appointed full-time.

The shuffle at the top of the department comes after Crown Perth chief executive Lonnie Bossi decided to quit last month.

Mr Bossi will remain with Crown for a transition period through to June.

Closing submissions to the Royal Commission are set to continue on Wednesday with a legal representative for Crown’s major shareholder James Packer and the counsel assisting the inquiry Patricia Cahill SC appearing.