Democratic voters now see Sen. Bernie Sanders (I-Vt.) as more likely to win the party’s presidential primary than his rivals, even as uncertainty about the eventual outcome of the race remains high, according to a new HuffPost/YouGov poll. Nearly 8 in 10, meanwhile, say they’re at least satisfied with the field of candidates currently running.

Sanders, who pulled off a victory in New Hampshire primary, has seen his numbers rise in national polls.

About a third of Democratic and Democratic-leaning voters now say they think Sanders is the most likely nominee. This represents a shift from late January, when former Vice President Joe Biden was seen as the most likely eventual winner, and from the days after the Iowa caucuses, when Sanders and Biden were seen as having about equal prospects.

In the latest poll, just 15% name Biden as the most probable winner; 12% name former New York City Mayor Michael Bloomberg, and 15% say another candidate. About a fifth say they’re not sure ― a faction that has actually gotten bigger since the beginning of the year.

Just 4% of Democratic and Democratic-leaning voters say it’s clear which candidate will win. Another 43% say it’s down to a few candidates, and 42% say the primary is still anyone’s to win. 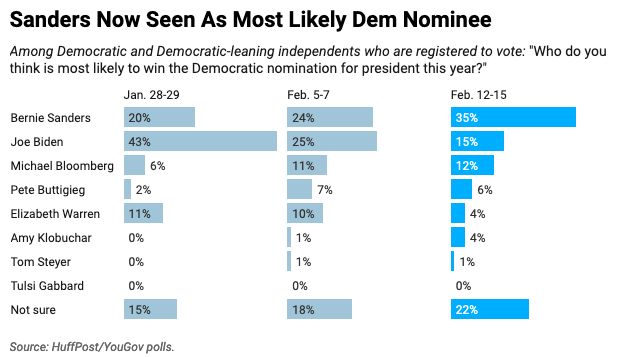 Early-state contests like the ones held in Iowa and New Hampshire are meaningful for the momentum and viability they offer, even if there are limited number of delegates at stake. And public perception about the results isn’t always as simple as crowning one candidate the winner and saying the rest are losers ― multiple contenders may be seen as having pulled out stronger-than-expected performances, or as having failed to meet expectations.

Two-thirds of Democratic and Democratic-leaning voters say Sanders did well in New Hampshire, with 58% saying the same of former South Bend, Indiana, Mayor Pete Buttigieg and 48% of Minnesota Sen. Amy Klobuchar. On the flip slide, 60% see Biden as having done poorly in the state, while 38% say Hawaii Rep. Tulsi Gabbard did poorly, and 36% each that businessman Tom Steyer and Massachusetts Sen. Elizabeth Warren did. 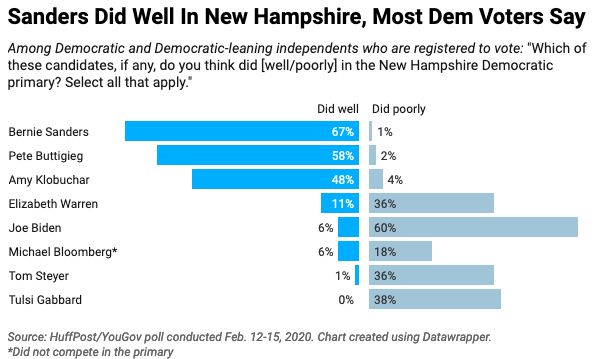 These numbers probably reflect, to some extent, voters’ own preexisting opinions about the candidates. But they also reflect a fairly broad awareness of the dynamics of the election, and the campaign narratives that have played out: After Iowa, voters gave roughly equal standing to Sanders and Buttigieg, with Warren and Biden trailing ― rankings that echoed the eventual results reported from the caucuses.

After the Iowa caucuses, Democratic and Democratic-leaning voters were divided in their levels of confidence that the results were accurately counted. That’s not the case for New Hampshire. About three-quarters are at least somewhat confident in the results from that state, and about 4 in 10 are very confident. Roughly three-quarters also say they’re at least somewhat confident that the presidential primary as a whole will be conducted fairly.

These voters are also overwhelmingly content with the state of the field. Seventy-nine percent say they’re either satisfied with or enthusiastic about the candidates running in the primary, and just 14% say they’re either dissatisfied or upset. When asked to pick which of the individual candidates they’d be enthusiastic to see as the nominee, 46% picked Warren and 43% chose Sanders, followed by Biden and Klobuchar at 34% each, Bloomberg at 31%, Steyer at 13% and Gabbard at 2%. 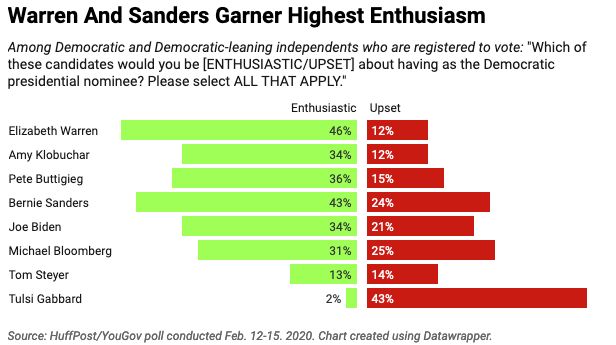 Use the widget below to further explore the results of the HuffPost/YouGov survey, using the menu at the top to select survey questions and the buttons at the bottom to filter the data by subgroups:

The HuffPost/YouGov poll consisted of 1,000 completed interviews conducted Feb. 12-15 among U.S. adults, including 322 Democratic and Democratic-leaning registered voters, using a sample selected from YouGov’s opt-in online panel to match the demographics and other characteristics of the adult U.S. population.

HuffPost has teamed up with YouGov to conduct daily opinion polls. You can learn more about this project and take part in YouGov’s nationally representative opinion polling. More details on the polls’ methodology are available here.