Bunnings has powered sales growth at Wesfarmers in the first months of the financial year as the retail giant more than doubled the value of its online sales.

In a trading update ahead of the $56 billion company's annual general meeting on Thursday, Wesfarmers said its retail brands delivered online sales growth of 166 per cent from July to October, or 98 per cent, if orders from locked-down metro Melbourne were excluded. 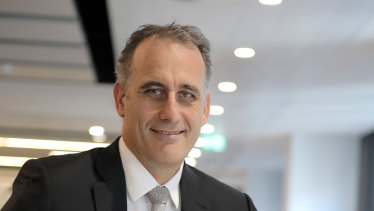 Home improvement chain Bunnings delivered the standout performance, with total sales growth of 25.2 per cent so far this financial year, driven by customers spending more on improving their homes. Officeworks also continued to ride demand for home office supplies and products, booking sales growth of 23.4 per cent for the quarter.

Trading was slightly less rosy at Kmart and Target after government-mandated shutdowns in Victoria resulted in the closure of 70 stores across the two brands during the lockdown period.

When Victorian sales were included, total Kmart sales growth was 3.7 per cent, while Target was down 2.2 per cent.

Wesfarmers said stock availability of some home products at Kmart had hurt sales, though the company had "significantly increased" stock in the lead up to Christmas.

Wesfarmers chief executive Rob Scott told investors while the shutdowns in Victoria had been very tough for customers and staff, sales had been "very strong" since bricks and mortar stores had reopened on October 28.

He reiterated that customer safety was a top priority and outlined expected ongoing costs of Wesfarmer's COVID-safe plans.

In the months leading up to October 21, Wesfarmers spent $23 million to ensure a safe environment across the business.

"We expect to incur costs of approximately $15 million per quarter while the threat of COVID exists," Mr Scott said.