Domain on the prowl as low interest rates drive up listings

Domain Holdings is keen to put its burgeoning balance sheet to full use, with chief executive Jason Pellegrino confirming the real estate listings group was on the hunt for potential acquisitions to help drive growth.

The company reported its first year-on-year rise in market listings since 2018 on Tuesday, with its half year results boosted by the growing signs of life in the property market.

Mr Pellegrino told analysts and investors, the company was willing to put money into an acquisition or a partnership to either boost its core listings business or help scale its marketplace business. 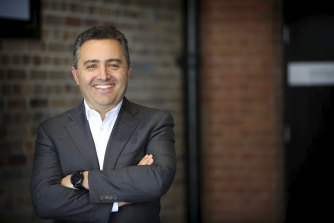 “We’ve got a very strong balance sheet, we’ve got great opportunities, we’ve got very supportive shareholders,” he said. “We are open and looking but we will be disciplined as to the opportunities that actually line up with our strategy rather than distract us from our strategy.”

Mr Pellegrino’s comments came amid growing industry speculation that Domain is about to make a $100 million strategic investment to diversify its revenue.

The boost in market listings wasn’t enough to placate the market, which instead focused on the company flagging a significant rise in operating costs for the second half of fiscal 2021. Domain also deferred any dividend until its full-year results. Its shares, which hit record highs last month, closed the session 3 per cent weaker at $5.13.

The company’s overall numbers for the half year ending December 31 were in line with market expectations with revenue of $138.4 million, which represents a like-for-like decline of 5.5 per cent, and a slight rise in net profit to $19.4 million.

“We are executing on the opportunity that lies in front of us. This is reflected in increased depth penetration, acceleration in our controllable yield, and 20 per cent like-for-like core digital EBITDA (earnings before interest, tax, depreciation and amortisation) growth in the first half.”

In a note to clients, Goldman Sachs said Domain’s cost control was better than expected and noted the strong increase in penetration of its products in the second quarter, which drove yield growth. However, it has flagged potential downgrades for Domain on the back of rising operating costs.

“Despite the stronger 1H21 cost performance, Domain expects FY21 operating costs to increase mid to high single digits implying 2H21 cost growth of 28 per cent to 37 per cent,” it said.

“In our view, unless reflecting a significantly more positive revenue outlook than we forecast we expect this near term investment to drive consensus downgrades across FY21-22E.”

According to Domain, overall costs for the 2021 financial year will be 5 to 6 per cent higher than the prior year and will reflect the acceleration of investment in product, technology and data to drive revenue growth.

“I think it’s absolutely the right thing to do to be capitalising on the market conditions that we see here.”

Mr Pellegrino sees further opportunities ahead in a low interest rate environment and from the potential for stamp duty reform.

“It is encouraging to see we are now entering a supportive environment for property, with low interest rates and high levels of demand. Although we have seen a modest early recovery, property turnover remains well below historic mid-cycle levels. Longer term there’s an opportunity for stamp duty reform to provide a further step change to transaction volumes,” he said.

Nine Entertainment Co, which owns this masthead, has a 60 per cent stake in Domain.

Last November Domain plans announced plans to cut almost 12 per cent in costs in the first half of the new financial year as it warned the spring selling season was weaker than previous years. The half year showed a cost reduction of 14.5 per cent but this included benefits from the Jobkeeper scheme.

The real-estate listings company scrapped its dividend at last year’s results after factors related to the coronavirus pandemic hit the company’s bottom line.

On Tuesday, the company said in light of the continued COVID-19 uncertainty the board has deferred consideration of a dividend until the full-year results.

Domain swung to a $227 million loss for the 2019-2020 financial year, dragged down by a major write-down of its digital division.

Domain noted that trading in January reflects a positive start to the year, albeit with atypical seasonal patterns.