Doug Schoen: Biden still ahead of Trump but here's why race is far from over 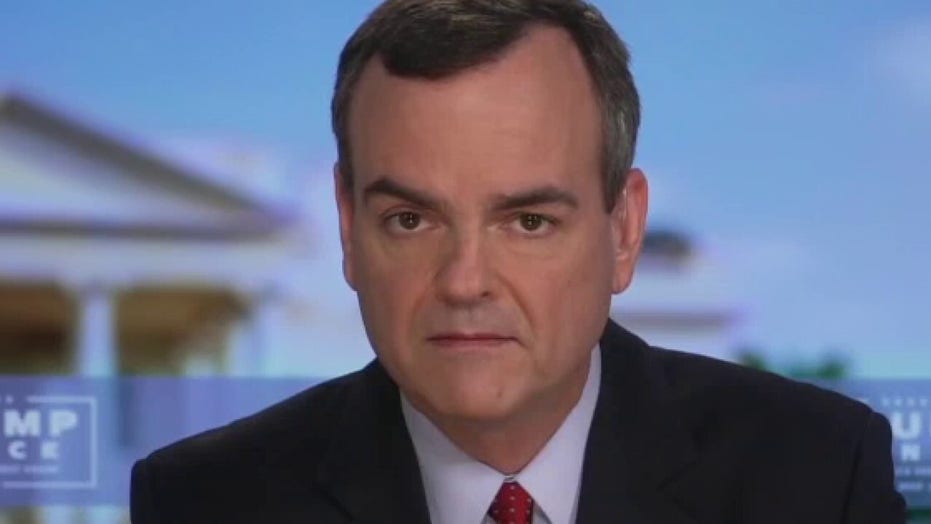 Tim Murtaugh on 2020 Trump campaign strategy ahead of DNC

How should we think about the state of the presidential race now?

On one hand, it seems pretty clear that Joe Biden is the favorite to win the election. According to the FiveThirtyEight election forecast, Biden has a 71 percent chance of winning the election in November.

Further, due to demographic shifts in several states and President Trump’s eroding support among key voter blocs that were essential to his 2016 victory, Biden has a strong chance to win in traditional swing states, including Pennsylvania and Michigan, as well as in states that were once Republican strongholds though they have trended blue recently, like Georgia.

On the other hand, given the evolving and uncertain nature of the coronavirus crisis, and more specifically, of our nation’s economic recovery, it is also clear to me that the election is far from over.

Indeed, lower unemployment numbers, a likely pick-up in economic news in the late summer and early fall, and the potential development of a coronavirus vaccine could very well make this a close race by the beginning of the debate season.

Moreover, even without these developments, Biden’s national lead over Trump has narrowed in recent weeks.

While Biden led Trump by about 9 or 10 points nationally throughout June and July, the race has tightened, and Biden is now ahead by just over 7 points, according to the RealClearPolitics national average.

Further, while Biden leads in most battleground states, his lead in many of these states is also within the margin of error. According to the FiveThirtyEight average of recent polls, Biden is only ahead by an average of 3.6 points in Arizona and 1.7 points in North Carolina.

Furthermore, according to the same analysis, between 1990-2014, there has been nearly a 2-point margin favoring Republican turnout in presidential election years. Thus, polls of registered voters would have a Democratic bias, given that more Republicans turn out.

While traditional voter turnout patterns may shift entirely this year, given that mail-in ballots will play an unprecedented role, this is nonetheless noteworthy as we consider Biden’s actual advantage.

The results of several recent primary elections have revealed that the Democratic party as a whole has shifted significantly to the left and in many ways is out of touch with mainstream politics.

And while Kamala Harris’ selection as Biden’s running mate has jolted Biden’s campaign and the response to her pick has been largely enthusiastic, the Biden-Harris ticket also faces mounting pressure to embrace left-leaning stances, including defunding the police and embracing a Green New Deal.

Indeed, the results of several recent Democratic primary elections have revealed that the Democratic party as a whole has shifted significantly to the left and in many ways is out of touch with mainstream politics.

This is evidenced by the recent primary losses of several entrenched centrist Democrats — including Reps. Elliot Engel and William Clay — to underfunded progressive insurgent candidates who were backed by members of “The Squad” of left-leaning congresswomen, each of whom also decisively won their recent primaries despite well-funded and coordinated opposition.

To be sure, this is something that Biden and Harris will be forced to reckon with in the coming weeks as they struggle to unify and energize their own party while also appealing to Independents and swing-state voters. Indeed, many of these voters have disaffected from Trump but are disheartened by the far-left’s calls to overhaul our health care and economic systems in the midst of a pandemic, and to defund the police in the midst of riots in major U.S. cities like Chicago.

Simply put, there is still a long way to go until Election Day, and the race is far from being decided.

Though we are living in truly unprecedented times, it is also worth noting that since 1900, only five U.S. presidents have lost their reelection campaigns, and the advantage that the incumbent president has should not be overlooked.

Furthermore, the moveable nature of the state of the race is compounded by the fact that this election will see an unprecedented number of mail-in ballots, which the U.S. Postal Service has disconcertingly said may lead to delays or some votes not being counted if they are not received by a certain date. On Friday, former President Barack Obama even accused President Trump of working to “kneecap” the Postal Service and prevent it from being able to handle an increased volume of mail in order to affect the outcome of the election.

Ultimately, though, if employment numbers improve, coronavirus cases and hospitalizations decline, and further steps are taken toward a vaccine, the race could very well be in a dead heat by the beginning of the fall debate season.

Related posts:
Hot News
Jill Biden helps honor women from 15 countries for courage
Live politics updates: Biden starts process to reverse DeVos, Trump on Title IX; COVID relief heads to House
5 email tips to stop your messages from being ignored, according to experts who work with Facebook and Nestle
generic plavix walmart cost
#ChooseToChallenge is the theme for International Women’s Day 2021. Here’s what you should know.
Why costly diesel is a bigger worry than petrol
Rand Paul questions if US borrowing puts country on path to become Venezuela
Recent Posts