A series of power plant outages, stiff retail competition and the rollout of government caps on household power bills have led to a dramatic 50 per cent cut in EnergyAustralia's profit.

EnergyAustralia, one of the nation's three major generator-retailers, contributed $295 million to Hong Kong-listed parent company CLP Group for the 2019 calendar year, down from $574 million the year before. 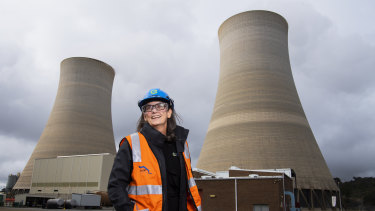 "There’s no question last year was difficult, one of the most trying we've had," managing director Catherine Tanna said. "Our results show that."

The results highlighted the severity of the hit to Australian power companies from state and federal governments' introduction of regulated retail price safety nets in mid-2019, known as "default market offers", the company said. EnergyAustralia last year announced a $1.2 billion write-down to its retail business as a result of the impact.

Lower electricity generation from its major power stations, including the Yallourn coal-fired power plant in Victoria's Latrobe Valley and the Mt Piper coal-fired power plant in New South Wales, were also highlighted in the company's results. Both planned and unplanned, the outages drove a sudden drop in carbon emissions generated by EnergyAustralia, the country’s second-largest polluter.

Ms Tanna pointed to the company's best-ever safety performance, its market-leading portfolio of grid-scale batteries and $180 million investment in upgrades to power plants ahead of the summer peak demand season as achievements not recognised in profit numbers.

"They don't show the great work done by our people and their unshakeable dedication to the things that matter – safety, customers and decarbonising our power assets," she said.

"We're excited by the work we’re doing on our pumped hydro, energy recovery and new gas-fired projects … these are examples of the generation assets that can underpin the energy system as big coal plants retire."

Ms Tanna said EnergyAustralia was "looking forward to 2020. "There's a lot to do, but I’m convinced we’re on the way to an energy system that works," she said.