Every jab counts: Vaccine hopes boost Qantas despite $1.7b loss

No one is counting the daily vaccination rates more assiduously than Qantas boss Alan Joyce. For the rest of us, this number represents a pathway to freedom – for Joyce, it’s a pathway to profit.

Trawling through the result Qantas delivered for the full financial year 2021 makes for difficult reading. First there is the $1.7 billion net loss. Then there is the $20 billion Qantas expects to have shed in revenue by December this year, to say nothing of the more than 9400 jobs permanently lost at the airline.

And there is plenty more ugliness in the numbers. The free cash flow for the year was minus $1.1 billion, return on invested capital came in at minus 23 per cent and Qantas posted a statutory pre-tax loss – which includes one-off hits such as redundancy payouts and aircraft writedowns – of $2.35 billion.

But its share price was up after the result, with the stock trading more than 3 per cent higher on Wednesday afternoon. 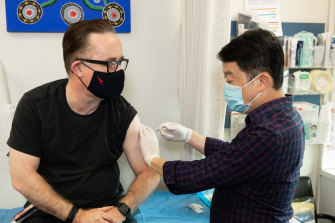 Looking back at the 2021 financial year, only 30 days were free of any state domestic border restrictions. And the damage isn’t finished yet: Qantas expects the current lockdowns will hit its earnings by another $1.4 billion in the December half, and the near-total absence of international travel will burn through $3 million cash per week.

As catastrophic as all this is – or “diabolical”, as Joyce himself calls it – investors should feel comforted by the fact that even after factoring in that the COVID bleeding will continue to be profuse until Christmas, it hasn’t financially broken the airline.

More particularly, Joyce doesn’t seem to see any further need to tap shareholders for more capital. And while Qantas will probably need to dip further into the debt facilities it has set up for the worst contingencies, the airline has enough liquidity to see it through if state borders reopen in November or December.

It even expects to get its debt down to its target range of between $4.5 billion and $5.6 billion, which is $300 million below where it currently sits.

The reason Joyce can feel so confident that business will bounce back when state borders are reopened is the small taste of normalcy we experienced in the four months until the state shutters were slammed down again to NSW and Victoria. That small period of relief from border closures allowed Qantas to generate some positive cash flow.

This window of freedom also demonstrated just how desperate Australians are to return to the air. Qantas’ capacity levels got to within spitting distance of pre-COVID levels for a month or so.

It was a juicy appetiser, even though the pandemic stole the rest of the meal for the remainder of the calendar year.

This takes a lot of the guesswork out of how Qantas’ domestic operations will fare after December – even though it is based on assumptions that vaccination rates are progressing at a particular rate.

Joyce also needs to rely on state governments to commit to letting domestic outsiders in under user-friendly quarantine arrangements. While most of the state premiers seem to be on board with the federal government’s national freedom road map, the West Australian government isn’t committing.

Alan Joyce gave Western Australia a little taste of what the consequences would look like when he announced contingency plans to re-route non-stop flights from Sydney to London to go via Darwin, rather than Perth.

The other reasons for shareholders to be optimistic about Qantas is how it will look after flying returns, and a billion dollars in cost has been stripped out of the airline.

These costs are primarily the result of permanently losing a third of its 30,000 strong workforce. This is a lever that cost Qantas dearly in the 2021 financial year, thanks to massive redundancy payments. The airline also cut a better deal with travel agents to reduce commissions and renegotiated other supplier contracts. Combined, those moves have lowered Qantas’ cost base, and most of the savings flow to the profit line.

The return of international flying will represent the cream on Qantas’ profit cake. At this stage, Qantas is factoring in some routes like New Zealand, the US, the UK and part of Asia will resume from December – at least on a limited basis, and a staged return to normal levels will continue thereafter.

All this goes to explain why Qantas’ share price has recovered more than 16 per cent this week.