Ellis walked free from the Downing District Court in Sydney on Tuesday after being sentenced over one charge of obstruct, hinder, intimidate or resist a Commonwealth official. 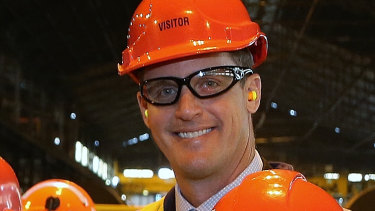 Former BlueScope executive Jason Ellis pleaded guilty to one charge of inciting the obstruction of Commonwealth public officials in the performance of their functions.Credit:

Ellis, the son of former BHP chairman Jerry Ellis, had pleaded guilty to the charge which stemmed from him encouraging his colleagues to give false evidence to the Australian Competition and Consumer Commission (ACCC) during its investigation.

Ellis will also have to pay a $1000 penalty and will be required to be of good behaviour for a period of two years starting on December 15.

Ellis' father was chairman of BHP in the late 1990s, as well as being a former director of ANZ Bank, Newcrest Mining and the former Chancellor of Monash University.

The ACCC is also pursuing BlueScope and Ellis in the Federal Court over civil breaches relating to alleged cartel conduct by the steel giant.

Ellis was the former general manager of sales and marketing at BlueScope.

In the civil case, the ACCC alleges Ellis and BlueScope attempted to induce various steel distributors in Australia and overseas manufacturers to enter agreements to fix or raise prices for flat steel products supplied in Australia.

The alleged attempted cartel activity occurred between September 2013 and June 2014.

BlueScope is defending the civil case as is Ellis who has denied attempting to make any inducements.

BlueScope has previously said it has investigated the allegations and did not believe that BlueScope or any current or former employees engaged in cartel conduct. BlueScope first told the market of the ACCC's investigation in 2017.

Ellis left BlueScope in August 2017 for reasons unrelated to the investigation. Prior to becoming the general manager for sales and marketing, Ellis was president of BlueScope Thailand. He was also a director of industry body Bureau of Steel Manufacturers of Australia between 2013 and 2017.