Global energy giant ExxonMobil and miner BHP say they will bring urgently needed new gas to the east-coast market by early 2021, as their joint venture prepares to begin work on one of the largest remaining undeveloped gas reservoirs in Victoria's Bass Strait.

The announcement on the $550 million project known as West Barracouta comes at a critical time as the push to lift the supply of gas into the southern states takes on greater urgency. Manufacturers have begun openly blaming a three-fold hike in the gas price as they close their doors, while authorities are warning of a looming supply shortage. The Morrison government, meanwhile, has made increasing gas production a condition for states to receive energy funding deals, pressuring Victoria to lift its onshore gas drilling ban to help offset the rapidly declining output from the Bass Strait offshore fields. 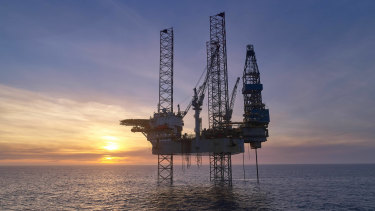 The Noble Tom Prosser drilling rig is now working on the second of two wells at the West Barracouta project in the Bass Strait.

ExxonMobil, which is seeking a buyer for its 50 per cent stake in the Bass Strait operation, has been investing heavily to moderate the decline from the ageing fields. Operated in a joint venture with BHP, the offshore fields have traditionally supplied up to half of Australia's east-coast gas demand.

In December the joint venture gave the green light to the $550 million West Barracouta project. However, the project is only expected to help offset the decline in production from the East Barracouta reservoir, rather than increase overall supply.

ExxonMobil said its subsidiary Esso Australia had drilled to a depth of 1.3 kilometres on its first well in the new West Barracouta field, and would have gas flowing into the market by 2021.

“After more than 50 years, the Gippsland Basin joint venture continues to be a crucial source of gas supply for the nation.”

ExxonMobil announced in September it was looking to offload its stake in the joint venture, which dates back to 1964. BHP has confirmed it is also weighing whether to sell out, as production continues to decline and the global move towards electric vehicles gathers pace and threatens long-term petroleum demand. On a conference call last year, BHP's Geraldine Slattery said the miner was "considering all our options" in light of ExxonMobil's move.

"In our view, it's a complex transaction, not something that will play out quickly … it will take a couple of years," Ms Slattery said. "We are considering what that might mean to us."

BHP did not see "material upside" in the oil fields beyond the 2020s, Ms Slattery said, but the company's focus in the meantime was to continue to derive value from the project as demand remained strong.

West Barracouta is the latest in more than $5.5 billion of investments made by BHP and Exxon in the Gippsland Basin including the Kipper Tuna Turrum offshore project and the onshore Longford gas plant upgrades, Exxon said.

In its latest assessment of the east-coast gas market, the Australian Competition and Consumer Commission (ACCC) found a slight improvement in the short-term outlook but said the outlook between 2021 and 2031 remained "uncertain" and warned of shortfalls if nothing was done to offset the declining Bass Strait.

"The southern states risk facing a shortfall in the medium term unless more exploration and development occurs in the south to compensate for ex-Longford production," said the ACCC, which also recommended investment in pipelines from northern Australia and the development of one or more LNG import terminals.

Representatives for large energy users, including manufacturers, said the industry was worried about the looming lack of supply. Chemical giant Dow announced the shutdown of its plant in Melbourne's Altona in May, citing high gas prices as a major driver, while Sydney-based RemaPak went into administration last year, saying its gas costs had rocketed from $4 to $16 a gigajoule.

"This will require significant and sustained attention by governments and the gas industry if we are to avoid demand destruction and thousands of lost jobs."