President Donald Trump says that voting by mail is “horrible” and “corrupt” because the “tremendous potential for voter fraud” helps Democrats win elections. But county-level election supervisors in his home state of Florida — where he recently cast a vote for himself, by mail — disagree, and are doing everything they can to ensure this crucial swing state can hold a safe election during the coronavirus pandemic.

While Florida isn’t prepared to hold an all vote-by-mail election, Broward, Miami-Dade and Palm Beach counties, the three most populous counties in the state, plan to send absentee vote-by-mail registration forms to every registered voter ahead of the state’s August primary and November’s general election. Many more counties have increased their outreach efforts to residents with mailers, postcards and public information campaigns in order to radically increase vote-by-mail sign-ups. A handful are planning to provide prepaid postage for voters to return their ballots.

Two counties, Santa Rosa and Citrus, even used emergency alert systems to text residents to encourage them to sign up to vote by mail. Citrus’s text went out to 107,000 residents, netting 2,200 new vote-by-mail sign-ups.

“Certainly every election cycle we reach out to voters giving them the options they have in the method of voting,” Susan Gill, supervisor of elections for Citrus County, in the west-central part of the state, said in an email. “This cycle it is more urgent.” 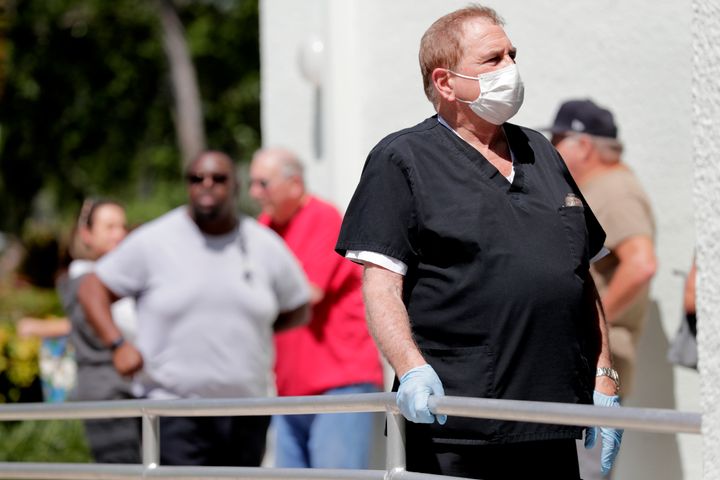 Allowing citizens to vote by mail was already important, in order to allow people who can’t make it to the polls on Election Day to still exercise their rights. But this year, with the coronavirus pandemic and social distancing measures designed to counter its spread, mail-in ballots are all the more vital. Multiple states postponed primaries because of the pandemic. Illinois and Wisconsin held theirs ― which resulted in multiple positive cases of coronavirus and at least one death linked to in-person voting. The November election can’t be postponed, so state and local election officials will need to ensure that voters are both aware of, and able to use, safe options to cast their ballots.

Florida is one of 34 states that either allows residents to vote absentee by mail for any reason or conducts all-mail elections. It is very easy to obtain an absentee ballot in Florida, election officers say. Voters can apply online, through the mail or over the phone. They then receive absentee ballots for the next four elections before having to renew their absentee ballot request.

Both the Republican and Democratic parties have pushed their voters to sign up to vote by mail in Florida since no-excuse absentee voting was implemented in the state in 2002 as part of a set of reforms following the 2000 presidential election debacle. The Republican Party long held an advantage in vote-by-mail sign-ups, particularly among elderly voters, but Democrats have caught up in recent years.

Mail-in ballots accounted for approximately 30% of votes cast by Floridians in the 2016 and 2018 elections; in some counties, two-thirds of votes came by mail.

The state’s county-level election supervisors, who hail from both political parties, also have a long record of educating county residents about vote-by-mail options. The coronavirus pandemic has led them to dramatically increase their outreach.

“[W]e are doubling down on our efforts and using every avenue we can to creatively reach our voters,” Vicki Davis, supervisor of elections for Martin County, said in an email.

One big reason why election supervisors are ramping up vote-by-mail educational efforts is that the state’s March 17 presidential primary revealed the problems that awaited them in future elections.

“[W]e had hundreds of poll workers call in sick or no-show. Polling locations cancelled at the last minute,” Lori Edwards, supervisor of elections for Polk County, said in an email. “And, that was early in the pandemic. I’m very concerned that we will have a hard time keeping polling locations and recruiting workers, so we are trying to take the pressure off precinct voting.” 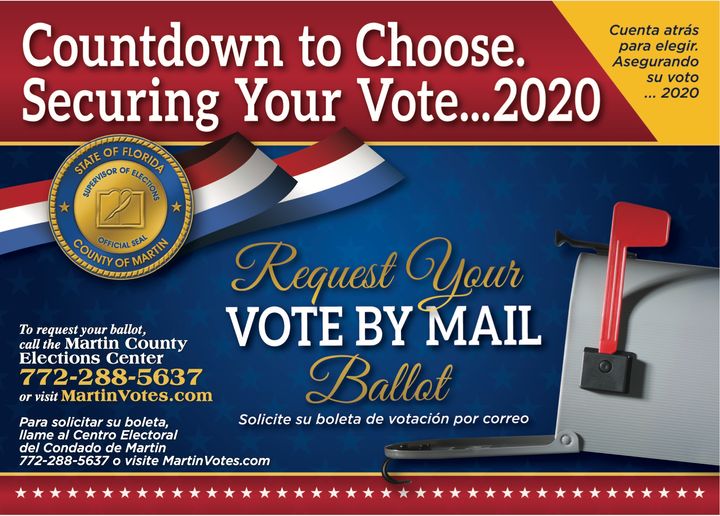 Currently, election supervisors’ main focus is sending out educational materials about voting by mail. These mailings inform recipients of the easy ways they can sign up to vote by mail ― online or over the phone. In some counties, the mailers will contain tear off applications that can be sent back. Depending on the county, mailings will be sent to all registered voters and, in others, they are targeted only at registered voters who have not signed up to vote by mail.

County elections offices are also ramping up social media messaging, placing op-eds in local newspapers, advertising on local television and radio stations, and putting up flyers and billboards throughout their communities.

Nonprofits distributing food during the pandemic are helping out by handing out educational flyers about vote-by-mail in Martin County.

“I do this not as a political measure,” Paul Lux, Okaloosa County supervisor of elections, said in an email about his efforts to ramp up vote-by-mail educational mailers.

Lux’s reasons are two-fold. “[R]egardless of the status of the virus, until there is an actual cure there will still be plenty of at-risk voters who will feel more comfortable voting from their homes,” he wrote. He also needs to know how many voters plan to vote by mail as early as possible in order to properly prepare his budget.

These concerns were echoed by many other county election supervisors for why they needed to do outreach in their communities now. Many of them have to weigh the cost of postage with the amount of outreach they can do. They expect to see some money from the $400 million Congress approved in the coronavirus relief act to help state and local election offices prepare for an increase in voting by mail.

As they educate their county residents about vote-by-mail, Florida’s election supervisors are also asking Gov. Ron DeSantis (R) to help them run safe elections by increasing the time period they can mail ballots to voters and allowing them to expand early voting while consolidating election day polling locations. DeSantis has not yet responded.

Related posts:
Hot News
Sharp declines across UK traditional media will cut its total ad spend by 7.5% this year
Acella Pharma Recalls Thyroid Drugs For Sub Potency
Here's how far back your resume should go for your next job search, according a career coach and former recruiter
Snowflake's market debut is biggest software IPO ever
US ‘On Track To Deliver And Distribute’ COVID Vaccine In October: Trump
U.S. Stands on Verge of Dark New Milestone: 200,000 Virus Deaths
A cyberattack that hit a German hospital may have led to a woman's death
Recent Posts
This website uses cookies to improve your user experience and to provide you with advertisements that are relevant to your interests. By continuing to browse the site you are agreeing to our use of cookies.Ok