A three-way takeover tussle for control of National Storage REIT is heating up after the self-storage property manager confirmed it has opened its books to US private equity firm Warburg Pincus. 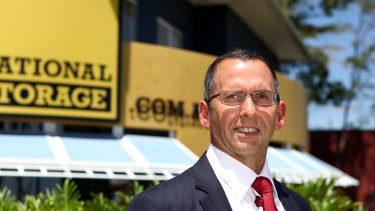 Andrew Catsoulis’ National Storage REIT is in the middle of a takeover tussle.Credit:AFR

National Storage said on Tuesday it had received an unsolicited non-binding proposal from Warburg Pincus for all of its securities at a cash price of $2.20 per stapled security.

Warburg’s interloper bid is the third pitch for the company, transforming it into a fully-fledged takeover target.

The New York-based firm was given due diligence access on a non-exclusive basis to National Storage’s now-crowded data room.

National Storage was trading at $2.06 when it first revealed three weeks ago that China-focused investment house Gaw Capital Partners had lobbed a similarly priced bid of $2.20 per security.

Its securities were trading at a high of $2.41 on Tuesday.

Hong Kong-based Gaw’s initial offer was quickly followed Warburg's bid, which the group's board has only now revealed.

The California-based giant real estate trust had hoped for a knockout bid when it lobbed a cash price offer of $2.40 per security to gain control under an inter-conditional company and trust scheme arrangement.

All three bids were made on the basis they will be reduced by any distributions paid out by National Storage, including a scheduled $0.047 distribution to be paid later this month.

ASX-listed National Storage, led by Andre Catsoulis, owns and manages a portfolio of 167 storage facilities in Australia and New Zealand.

Speculation in the media about Warburg's intent forced the disclosure.

"Given the repeated press speculation regarding Warburg Pincus' interest the National Storage REIT board has determined to disclose its indicative proposal," the group said.

"Discussions with each party are at this stage preliminary and subject to a number of conditions and there is no certainty that the discussions will lead to a final recommended offer," it said.