In a sign of coal’s enduring near-term demand despite accelerating global action on emissions, data from the Australian Bureau of Statistics revealed earnings from coal shipments jumped to $14.7 billion during May, surpassing iron ore for the first time in 13 years. 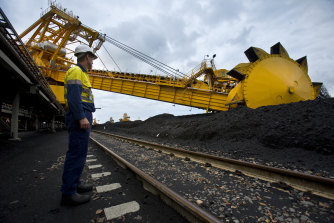 Prices for Australian coal have surged as the war in Ukraine worsens a global shortage of the fossil fuel.Credit:Louie Douvis

“The coal industry continues to play a significant role in Australia’s economy,” it said. “The ABS trade data demonstrates the important role high-quality Australian coal plays in electricity generation, steel-making and energy security in many countries around the world, particularly in Asia.”

Coal usually ranks as the country’s second-largest export commodity, but prices for the fossil fuel have been rocketing this year as Russia’s invasion of Ukraine drives buyers across the globe to scramble to secure non-Russian coal supplies.

Amid intensifying competition for spare cargoes, prices for thermal coal, which is used in power generation, have risen from an average of $US90 a tonne in 2021 to beyond $US360 a tonne. Prices for metallurgical coal used in the steel-making industry have gone from $US143 a tonne to more than $US400.

But coal’s status as the country’s biggest export may be shortlived. Federal Resources Minister Madeleine King says the government expects the steel-making raw material iron ore to remain the nation’s biggest export on an annual basis.

King said thermal and metallurgical coal prices had been “unusually elevated”, with the fallout from the war in Ukraine lifting demand at the same time as extreme weather and flooding across Australia’s coal sector including in the Hunter Valley of New South Wales has been disrupting supply.

“While coal prices are likely to remain high over coming months, iron ore is expected to be Australia’s highest earning commodity in 2022-23 and in 2023-24.”

Despite the huge increase in coal demand and prices, the longer-term outlook for Australia’s coal industry remains deeply uncertain and will depend largely on how aggressively countries seek to decarbonise by shifting to cleaner sources of energy.

Large resources companies are increasingly divesting or announcing closures of their coal assets, while a growing number of banks, insurers and shareholders are pledging not to make new investments in the sector, citing concerns about its future demand and contribution to global warming.

If the world meets the Paris Agreement’s ultimate aim of 1.5 degrees – the level scientists say is necessary to avoid the most catastrophic effects of climate change – Australia’s coal earnings could collapse by up to 80 per cent by 2050, according to the Reserve Bank.

Minerals Council of Australia chief executive Tania Constable said this year’s surge in global energy demand, disruptions at mines in other countries and sanctions facing Russia had boosted prices and helped propel the nation’s mining and energy exports to an all-time high. The industry had contributed a record $43 billion in company tax and royalties for the financial year, she added.

“But we can’t expect the record prices we have seen over the past 12 months to last,” she said. “Prices for several commodities have already started to drop in recent weeks in response to rising inflation concerns and higher interest rates around the world.”

Iron ore, the ingredient that’s combined with coal in steel-making furnaces to churn out liquid metal, remained Australia’s largest earner in the past financial year. The commodity accounted for $133 billion in export earnings as prices averaged between $US110 and $US140 a tonne. But the government and analysts are bracing for earnings to decline in the coming two years as mines in Brazil lift production volumes and global demand starts to normalise.

Marius van Straaten, an analyst at Morgan Stanley, said he expected the iron ore market to become oversupplied in the second half of the year. “The first signs of a looser market are there, with China’s port inventories building up last week for the first time since mid-February,” he said.

Glencore said its Australian coal business provided work for 9900 Australians last year and delivered an economic contribution of $9.2 billion, including $6.3 billion on goods and services and payments of more than $1.6 billion in taxes and royalties to federal and state governments.