The real estate funds manager sealed a fund-through deal with developers Time & Place and the Golden Age Group to buy a yet-to-be-built 10-storey office at 200 Victoria Parade, on the eastern edge of Melbourne's CBD.

The deal, which will see ARA underwriting, managing and owning the asset on completion, is the latest in a string of similar fund-through arrangements bringing new supply into tight commercial office markets. 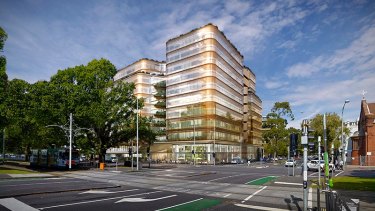 An architect’s impression of a new 10 storey office.

ARA has become increasingly active in the local market, buying assets in Sydney and Melbourne and taking a stake in listed fund manager Cromwell.

Time & Place director Tim Price said the new office represented a "significant trend outbound from the CBD" by both tenants and investors as the evolution of fringe office markets draws in institutional money.

In the latest Property Council survey, Melbourne recorded the lowest CBD office vacancy rate in the country, at 3.3 per cent, while Sydney's also pegged lower from 4.1 per cent to 3.7 per cent in the six months to July 2019.

The A-grade East Melbourne building was designed by Sydney architects FJMT is expected to be finished in 2022 ahead of a wave of new supply.