GM and LG’s too-big-to-fail ties are being tested by a $1.4b bill

In June 2017, months after General Motors beat Tesla to market with an affordable, long-range electric vehicle, it took out full-page newspaper ads touting how long its Chevrolet Bolt could travel between charges. The tagline: “Begin a long-distance relationship, now.”

Four years later, the long-distance relationship between GM and its battery partner, LG Energy Solution, is being tested like never before. At issue: who will pick up a roughly $US1 billion ($1.4 billion) tab. 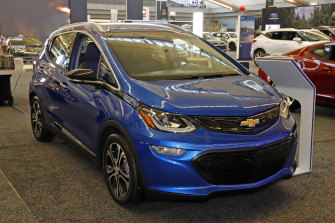 73,000 Chevy Bolt vehicles are included in the latest recall.Credit:AP

GM last week recalled Bolt EVs for the third time in nine months because of risk their batteries could catch fire. The Detroit-based company will replace modules in more than 73,000 additional vehicles and said it’s trying to get LG to pay for the fix. LG, headquartered some 10,600 kilometres away in Seoul, said the expense will be divvied up depending on the results from a joint investigation into the root cause of the problem.

At stake is what has looked like one of the most promising partnerships in the burgeoning world of EVs. CEO Mary Barra is betting GM’s future on going electric, setting a goal in January to sell only zero-emission vehicles by 2035. LG Energy is pursuing a stock listing after splitting last year from South Korea’s LG Chem and can ill afford to lose such a big customer.

“Together with our client and partners, LG is actively working to ensure that the recall measures are carried out smoothly,” the South Korean company said in an emailed statement. The root-cause investigation is being carried out by GM, LG Electronics and LG Energy Solution.

GM first recalled about 70,000 Chevy Bolts from the 2017 through 2019 model years in November. A month earlier, the US National Highway Traffic Safety Administration opened an investigation into whether the cars were prone to catch fire when parked. GM voluntarily called back the vehicles, citing issues with batteries made in Ochang, South Korea.

GM and LG have little choice but to maintain close ties. They’ve started constructing two battery factories together in Ohio and Tennessee, each costing more than $US2 billion and expected to employ more than 1,000 people.

The automaker asked Bolt owners to take their cars to dealerships for a software upgrade that limited recharging to 90 per cent of full battery capacity as it worked to find a permanent remedy. NHTSA urged Bolt owners to park outside and away from their homes as a precautionary measure, saying it was aware of five fire incidents, including at least one that ignited a home.

In July, GM recalled the same group of cars again, after two vehicles that had been repaired caught fire. The company said it would replace battery modules after identifying the simultaneous presence of two manufacturing defects in the same battery cells.

“Batteries are very hard,” Greg Less, technical director of the University of Michigan’s Battery Lab, said by phone Sunday. “When something goes wrong in a cell, the cell goes bad – but not always right away.”

Early this month, GM took an $US800 million charge related to the recall, which contributed to quarterly profit missing estimates and its shares plunging the most in more than a year. Barra said cells for the 2020 and later model-year Bolts were built using improved manufacturing processes, so the recall didn’t affect the newer vehicles. 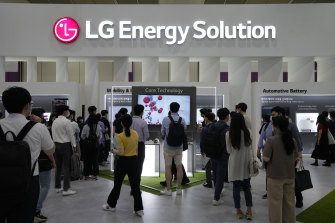 LG Energy is pursuing a stock listing after splitting last year from South Korea’s LG Chem and can ill afford to lose such a big customer.Credit:AP

Two weeks later, GM changed its tune. In a statement issued after the close on August 20, the carmaker said that in rare circumstances, batteries supplied for newer Bolts may have two manufacturing defects – a torn anode tab and folded separator – in the same cell that increases fire risk. The additional cost: $US1 billion.

Working with LG, the best information GM had the time that it reported earnings early this month was that battery module issues were confined to the LG plant in Ochang, according to Dan Flores, a spokesman for the carmaker.

“As we continued analysing battery modules and doing physical teardowns of battery packs, we found rare instances of these issues in battery modules from other production lines,” Flores said in an email.

GM recently confirmed that a fire in Arizona involved a 2019 Bolt that contained cells from an LG factory in Holland, Michigan. Flores said a recent battery fire posted to YouTube also has been confirmed to involve a 2020 Bolt. GM has not inspected the vehicle and the video didn’t factor in the company’s decision to expand its recall, he said.

The fires and challenges finding a fix are straining a 14-year relationship. When GM and LG announced they would join forces on the Bolt in 2015, they touted how virtually problem-free the battery cells were that LG supplied for the plug-in hybrid Chevy Volt, which launched in 2010. 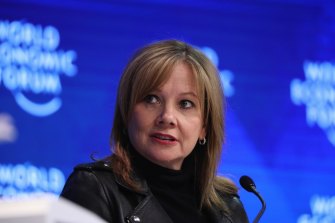 CEO Mary Barra is betting GM’s future on going electric, setting a goal in January to sell only zero-emission vehicles by 2035.Credit:Simon Dawson

That early track record of success is little consolation to tens of thousands of Bolt owners who are waiting anxiously for a resolution. Elise Hurwitz lives in the hills of Oakland, California, in a neighbourhood at increased risk of wildfires amid the state’s ongoing drought. The 2017 Chevy Bolt parked in her driveway now makes her extremely nervous and uncomfortable.

“I really do not want to be parking my Bolt in the Oakland hills during fire season waiting for my turn for battery cell replacement,” Hurwitz said. “I would like GM to take custody of the vehicle until it is safe to park it at my home. How do I get rid of my car? I don’t want it with this risk, and I can’t sell it.”

Customers can be confident that GM is taking steps to make sure its vehicles are safe, Doug Parks, the automaker’s executive vice president of global product development, purchasing and supply chain, said in last week’s statement. “We know that building and maintaining trust is critical.”

GM and LG have little choice but to maintain close ties. They’ve started constructing two battery factories together in Ohio and Tennessee, each costing more than $US2 billion and expected to employ more than 1000 people. GM will direct the manufacturing quality processes used at these and other yet-to-be announced cell manufacturing plants, Flores said.

The next-generation Ultium batteries going into an electric Chevy Silverado truck, Cadillac Lyric sport utility vehicle and GMC Hummer pickup and SUV, among other models, will use a common cell that GM and LG will manufacture as part of a joint venture called Ultium Cells.

Since GM started receiving complaints of fires from customers last year, Flores said the automaker and LG have been reviewing manufacturing data from several facilities and disassembling battery packs to inspect cells.

“There are hundreds of people at both companies that have been working very long hours for months now digging into the data,” Flores said.