“The Republican Civil War is now cancelled,” Sen. Rick Scott, the chairman of the National Republican Senatorial Committee (NRSC), says in a fiery memo being sent widely within the Republican Party on Tuesday.

The two-page letter, first obtained by Fox News, is addressed to GOP voters, activists, leaders and donors. Scott, who is charged with winning back the Senate for Republicans in 2022, says in it that the GOP needs to put aside its internal squabbles and focus on beating Democrats, not on relitigating Trump-era internal disagreements.

“The long running impeachment show is now over,” Scott, R-Fla., writes. “This political theater should have been held at the other end of Washington in the Kennedy Center instead of the US Capitol. It was an unserious circus. It’s over. Now it’s time to look ahead.”

Former President Donald Trump was acquitted of the House impeachment charge against him earlier this month by a vote of 57-43, with seven GOP senators voting to convict. Scott in his letter says that rather than continue to debate impeachment, Republicans need to wake up to the successes Democrats are having with their federal government trifecta. 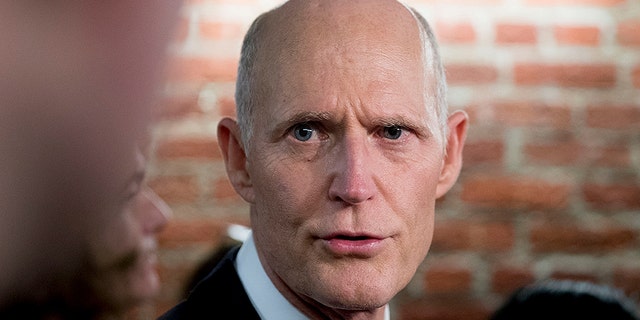 “The Democrats control the White House, the Senate, and the House of Representatives. In other words, they control Washington,” Scott continues. “Here is what they have done and are in the process of doing so far: cutting border security, granting amnesty to illegals, cancelling the Keystone pipeline destroying thousands of jobs, allowing males to compete in women’s sports, banning fracking on federal lands making us less energy independent and using tax dollars to pay for abortion in foreign countries.”

“No, we don’t have time for that: The hour is late, the Democrats are planning to destroy our freedoms, and the threat in front of us is very real,” he says.

Scott says that he does not want to shut down intra-party debate, but that those debates need to be put aside because Democrats “do not want to simply ‘cancel’ us, they want to destroy anyone who disagrees with them.”

“To beat this threat — the threat of socialism, crushing debt, loss of freedom — we must focus on addition, not subtraction; on looking forward, not backward,” Scott says.

It’s unclear how much cooperation Scott will get in his efforts from other Republicans.

Senate Majority Leader Mitch McConnell, R-Ky., recently embarked on a media tour trashing the former president for his behavior after the presidential election.

“There is no question former President Trump bears moral responsibility,” for the Jan. 6 assault on the Capitol, he wrote in the Wall Street Journal. “His supporters stormed the Capitol because of the unhinged falsehoods he shouted into the world’s largest megaphone.”

Trump then unleashed on McConnell in a strikingly personal and scorched-earth press release.

“Mitch is a dour, sullen, and unsmiling political hack, and if Republican Senators are going to stay with him, they will not win again.” Trump said. “Where necessary and appropriate, I will back primary rivals who espouse Making America Great Again and our policy of America First.”

Some of you voted for President Trump enthusiastically, some with reservations, and some with great reluctance. It doesn’t matter.

If Trump follows through on that threat, it could put Scott and the NRSC in the awkward position of having to decide whether to support an incumbent Republican and spend money essentially opposing the former president in a primary, or to let the incumbent face the primary challenge on his or her own. Scott has reiterated in recent days that that NRSC will support incumbents.

That is potentially why Scott may be focused on turning Republicans’ fire off of each other and onto the Democrats.

“Yes, we are up against powerful elites headquartered in Washington and on the coasts, and they endlessly try to lecture, bully, and intimidate us. But we can beat them,” Scott says.

“Some of you voted for President Trump enthusiastically, some with reservations, and some with great reluctance,” he continues. “It doesn’t matter. We got 74 million votes, and we can easily add to our numbers if we work together.”

Scott’s letter is similar to his scheduled address to the Conservative Political Action Conference (CPAC) on Friday, an NRSC spokesperson told Fox News. There, Republicans will gather for their first annual confab after Trump’s presidency and chart their course forward.

The event is expected to be a show of force for the Trump wing of the GOP, with Trump giving his first public address since leaving office. Axios reported that the intention of Trump’s appearance is to show he is the “presumptive 2024 nominee” and is “still in charge” of the party, according to his allies.