Wasabi has a pretty simple pitch — it offers cloud storage for corporations that is much cheaper and faster than Amazon's comparable service.

The Boston-based startup doesn't offer cloud-computing services or the ability to run applications. It just offers a place for corporations to store their data cheaply and securely. But with a growing number of companies moving away from managing their own data centers to relying on the cloud for computing and storage, David Friend, Wasabi's CEO and cofounder, thinks his firm's simple focus is more than enough to build a successful and growing business.

"Our view of the market is over the next five or 10 years, all of the world's storage is going to migrate to the cloud, or at least most of it," Friend told Business Insider on Monday. "And we want as much of it as possible to be stored in Wasabi when the dust settles."

Friend and cofounder Jeff Flowers previously launched and ran Carbonite, which offered cloud backups for consumers. Toward the end of their tenure there, Flowers, who served as Carbonite's chief technology officer and now has the same role at Wasabi, came up with an idea for storing data in the cloud that would be less expensive than existing methods and would allow for much quicker data transfers.

Flowers spent about a year with a team of senior engineers developing the idea to see if it would work, Friend said. Once he did, Friend found someone to replace him as Carbonite's CEO and started Wasabi with Flowers in 2016.

The key to Wasabi's technology is that Flowers designed a system that controls how the heads on disk drives write data to the disks, instead of leaving that up to a computer operating system. By doing that Wasabi is able to use disk space more efficiently and make its disks last longer. Both of those help the company save money and deliver data more quickly.

"We're cloud storage experts," Friend said. He continued: "We actually write the nasty code that gets down there
and controls the movement of the heads on the disk drives, and very few people know how do that."

Wasabi charges less than other providers

Wasabi passes its cost savings along to customers. On a per-terabyte, it charges about one-fifth what Amazon charges. But customers who frequently access their cloud-stored data can save even more.

The big cloud storage providers — Amazon, Microsoft, and Google — all charge customers fees based on the amount of data that gets sent out each month from what they've stored in the cloud. These so-called egress fees can add up to big bucks in addition to the charges customers pay to just to house their data with those service providers.

Unlike other cloud storage providers, "we have one line item on our bill, and that's the amount of storage you use," Friend said. "And people love that about Wasabi."

Friend and Flowers designed Wasabi to be a direct substitute for Amazon's Simple Storage Service, or S3. Companies can connect to Wasabi's service using the same protocol that S3 has made into a de-facto standard. So companies can typically swap out S3 with Wasabi's cloud storage for their applications or products simply and easily.

Wasabi found a ready audience for its service after launching in May 2017, Friend said. It grew by about 5 times last year and continues to grow each quarter by about 40% from the previous three-month period, he said. It already has 18,000 customers, and some 3,000 partners who help sell its service to corporate customers.

The company has also been a hit with investors. To date, it's raised $110 million, including $30 million in May, just as the coronavirus crisis was cratering the economy. That round was led by Forestay Capital.

"We have had no problem raising money," Friend said.

Wasabi operates three data centers in the US, one in Japan and one in Europe and has customers in 60 countries around the world. With the new funds, the company plans to expand its operations into Singapore, Australia, and Canada and to open another US data center.

It also plans to add staff. It has 105 employees now, up from 35 at this time last year. It plans to add to those numbers as it builds out its marketing, business development, and data center operations teams.

"It's been a rocket ship," Friend said.

Here's the pitch deck Wasabi used to raise its latest round of funding: 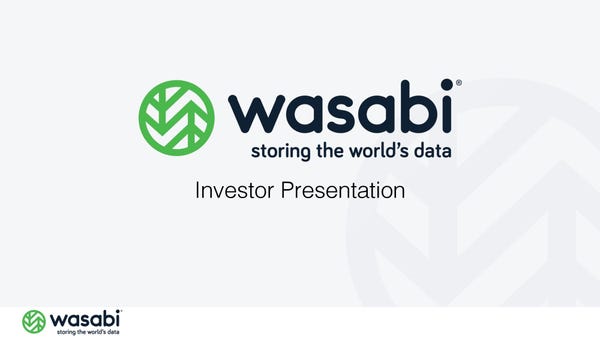 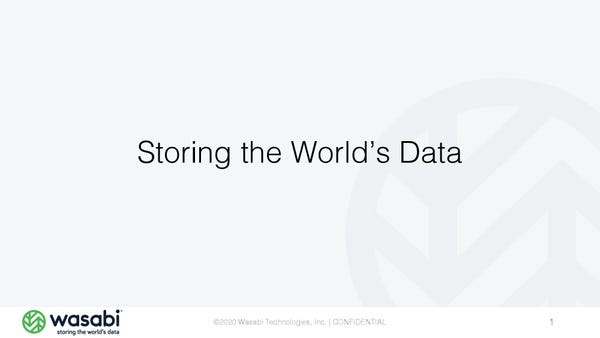 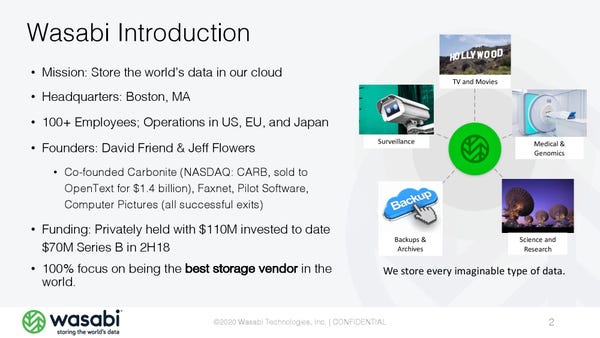 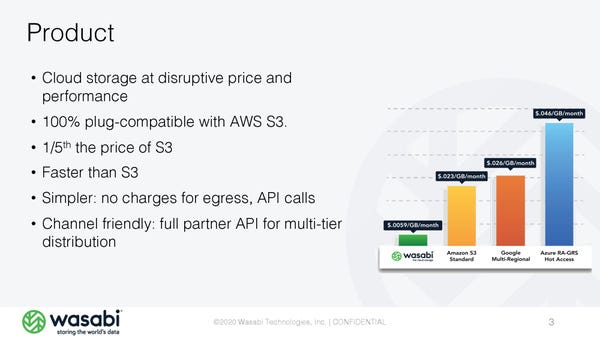 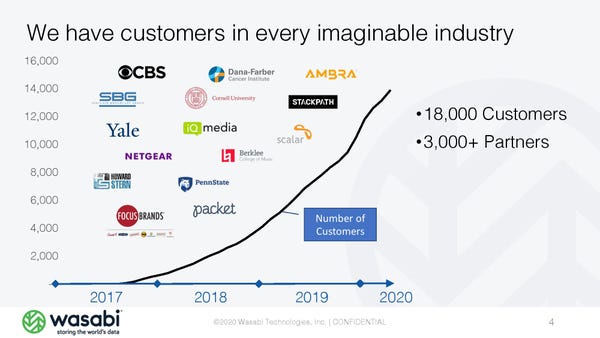 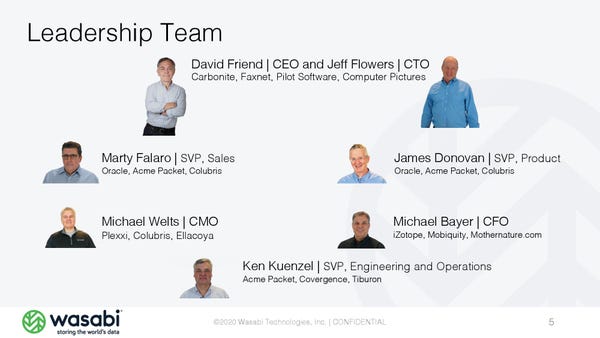 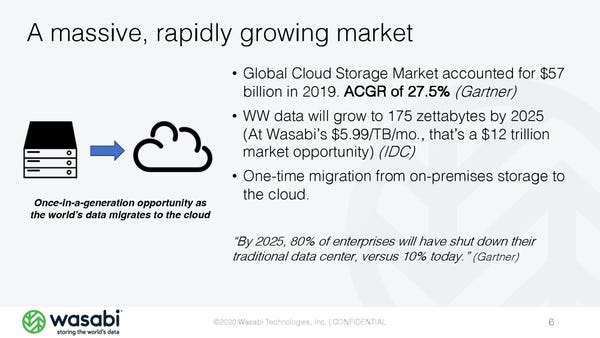 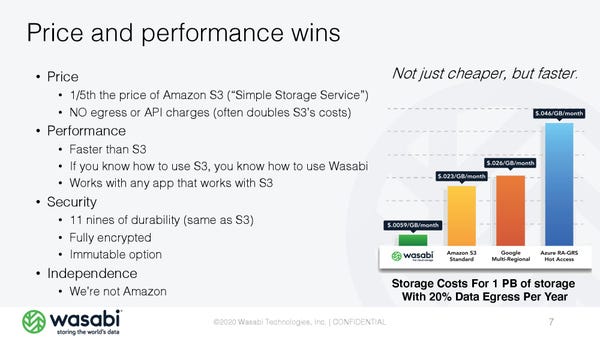 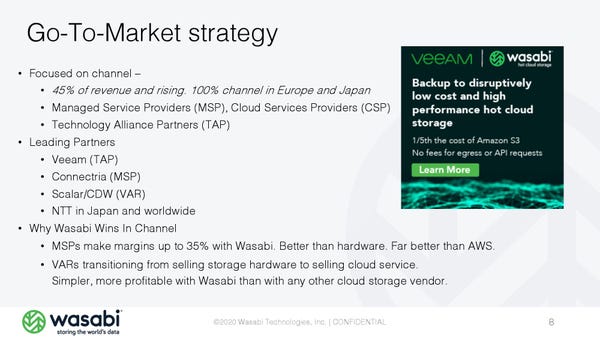 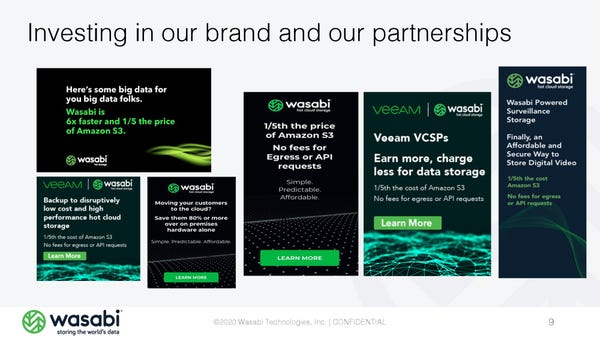 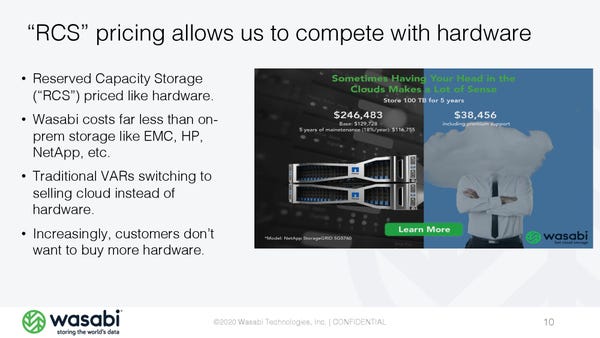 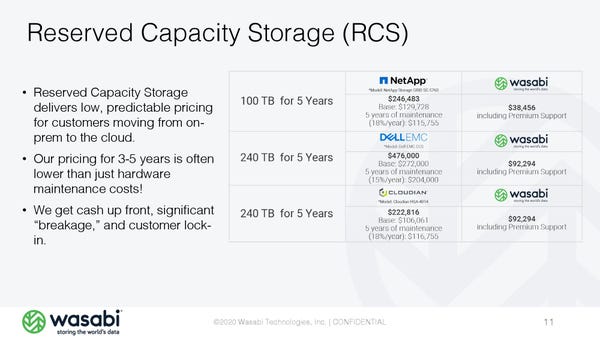 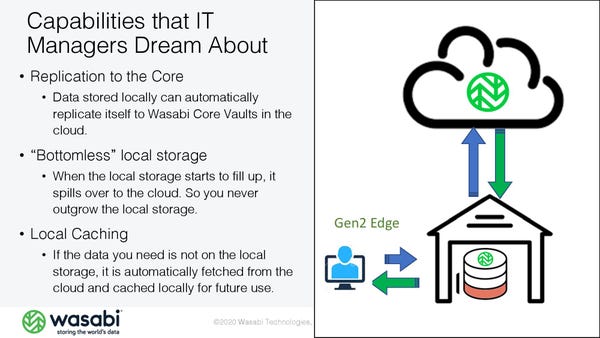 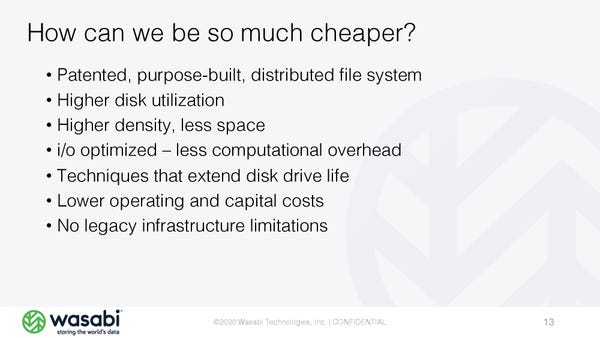 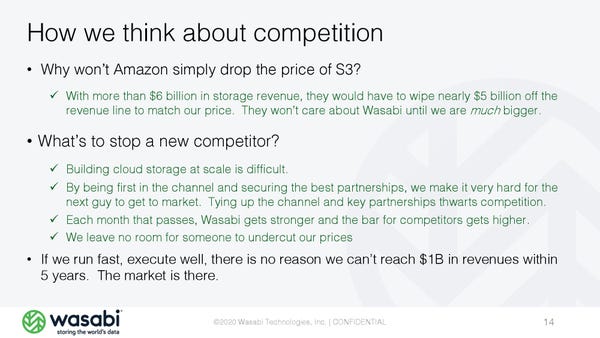 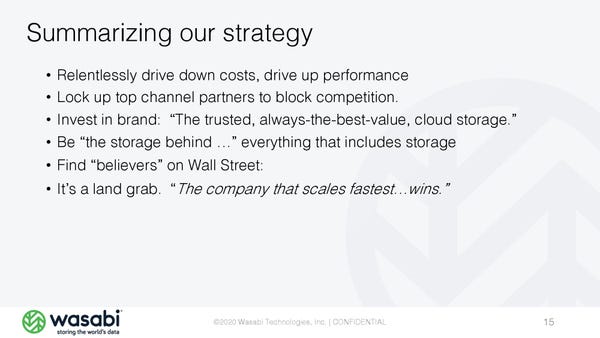 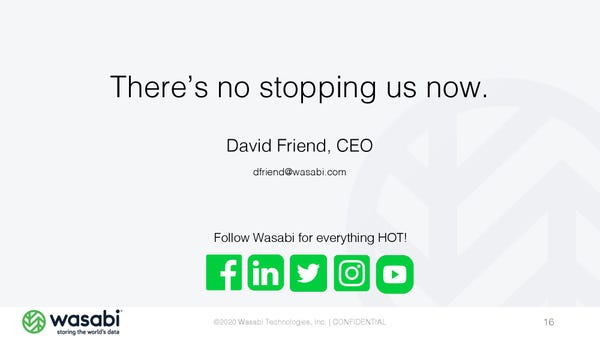 Got a tip about a startup or the venture industry? Contact Troy Wolverton via email at [email protected], message him on Twitter @troywolv, or send him a secure message through Signal at 415.515.5594. You can alsocontact Business Insider securely via SecureDrop.

Related posts:
Hot News
Infrastructure pandemic splurge needs private funds, says Macquarie
Apple to launch first online store in India next week
In financial distress? Seek help, don’t commit suicide
Alan Joyce’s pay falls to $1.7 million as pandemic clips Qantas’ wings
Jeff Bezos is the richest person in the world
Biden promises Russia will 'pay a price' for election meddling while Trump rails against his own FBI director
Biden Highlights Middle Class Economic Pain in Town Hall
Recent Posts
This website uses cookies to improve your user experience and to provide you with advertisements that are relevant to your interests. By continuing to browse the site you are agreeing to our use of cookies.Ok