Jeff Bezos announced that he is committing $US10 billion ($15 billion) of his own wealth to save the planet. His 130-word post on Instagram was light on detail, but there's still a lot we can tell based on what we do know. 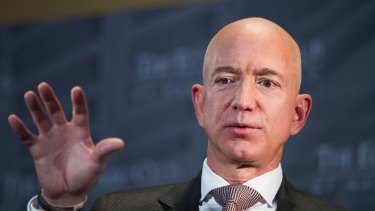 Jeff Bezos has the power to heavily influence the direction that climate philanthropies take as a whole.Credit:AP

This isn't Bezos's first big climate announcement, of course. In September, the world's richest man committed Amazon to a "climate pledge" to reach net-zero emissions by 2040. That announcement came after months of protests from employees wanting the company to do more on climate change, especially in comparison to tech peers like Microsoft and Google.

The Bezos Earth Fund will be different from the Bill Gates-led $US1 billion Breakthrough Energy Ventures fund, which seeks to make investments that will generate returns. Instead, Bezos wants to make donations to scientists, activists and NGOs. That changes the game in climate philanthropy.

Just look at the fund's size. The total donated to climate-related causes in the US, which forms the major chunk of global giving, is about $US500 million annually, says Noah Deich, executive director of Carbon 180, an NGO focused on carbon removal. Even if Bezos were to hand out his sum over a 20-year period, he would likely double donations for the cause. That gives Bezos the power to heavily influence the direction that climate philanthropies take as a whole.

But deploying all of that money effectively will be difficult, even if Bezos employs an army of climate experts. The model of mega-philanthropy comes with limits. In his recent book, Winners Take All, the writer Anand Giridharadas suggests suggests that the best-intended billionaire giving likely has impacts only on the margins.

Another potential problem is that there aren't that many organisations that can make good use of such large sums of capital, experts in the field say. For comparison, the Environmental Defense Fund and Sierra Club, two of the largest environmental organisations in the US, spend about $US200 million and $US85 million annually. 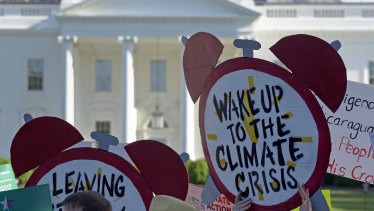 Investing in politics may be the best way for Jeff Bezos to make a difference in the climate change fight. Credit:AP

What about scientific research? Donating a chunk of the fund to research could fit with Bezos's thinking behind the Blue Origin space venture, namely that the Earth is a garden that we should protect by moving heavy industry to space. If instead, Bezos is thinking about supporting Earth-bound climate solutions, he only has to look at Gates, who has supported ventures for years that have yet to make a big dent on the emissions curve.

But in the end, most experts I spoke to say that the most effective use of Bezos's money could be on politics. The Instagram post says that he is interested in donating to "activists." But ultimately, governments have more power than anyone to bend the emissions curve through legislation and regulation. Even more than a man whose wealth is estimated at $US130 billion by the Bloomberg Billionaires Index. Putting climate-friendly politicians into office in the US and across the world could be the best way to do that.

That is a "straightforward and unsophisticated" way of trying to put the world back on track, says Noah Kaufman, a climate and energy economist at Columbia University's Center on Global Energy Policy.

And it would probably cost a lot less than $US10 billion.