Thanks to TikTok, a direct-to-consumer soda company just had its second largest sales day since its founding in 2016.

Poppi, a prebiotic soda brand that promotes gut health, saw a surge in sales after the company posted a video on its TikTok account on January 28 featuring founder and Chief Brand Officer Allison Ellsworth. In the post, she shared the story of why she launched Poppi and later secured a $400,000 investment in 2018 on the hit television show Shark Tank.

The video features Ellsworth describing her struggles with stomach pain and her search for a solution to alleviate the symptoms. Ellsworth finally felt a change when she started drinking apple cider vinegar, but the off-putting taste inspired her to concoct a better tasting version of the gut-healthy drink — which ultimately became Poppi.

“I was real and told my story about the hardship that I was faced with, and how I overcame it,” Ellsworth told Insider. “I think a lot of people can relate to it or can find hope in it.”

As of February 19, the video has amassed more than 700,000 views and more than 81,000 likes, making it the most popular video on the brand’s TikTok feed. Poppi’s TikTok follower count has also grown from 800 to more than 13,000 followers.

Ellsworth said she had been experimenting with different posts on TikTok for months before finally landing a hit with her origin story. In the post, Ellsworth related how she presented her product on Shark Tank in 2018 while she was nine months pregnant.

“It’s the story of my American dream,” she said.

From viral success to a surge in sales 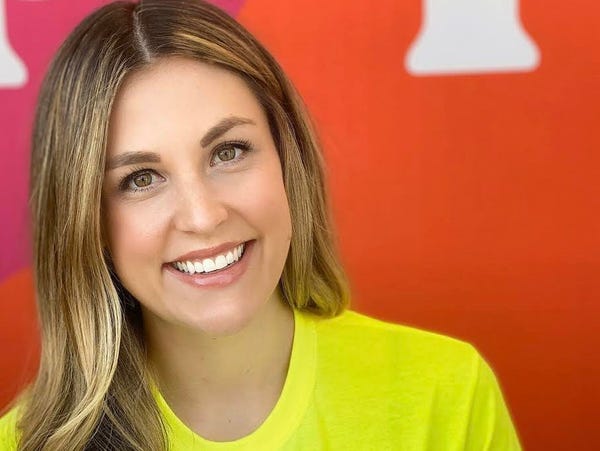 In the case of Poppi, social media success translated quickly into a surge in business. On January 29, the day after the TikTok video was posted, Poppi had its second-largest sales day in its history, trailing only behind Amazon Prime Day last year. Poppi launched on Amazon in March 2020.

According to the company, sales of Poppi products grew 200% on January 29 compared to an average business day. The initial sales spike lasting three consecutive days, led Poppi’s total sales in January to increase 140% over its average sales month and an 81% month-over-month.

In general, a third of Poppi’s sales comes from Amazon and the rest come from partnerships with national retailers like Whole Foods and regional chains. The company declined to share specific sales figures.

Even with its strong presence in physical stores, Ellsworth described Poppi as a “digital first company.” In addition to TikTok, the brand implements unique social media strategies on Instagram, Facebook, LinkedIn, Twitter and Clubhouse, she said.

“Our job is to communicate with our audience in an authentic way with content and messaging that fits the platform,” Ellsworth said.

How brands are winning on TikTok

Major brands like Chipotle and Walmart have been able to utilize TikTok to engage audiences through influencer partnerships and digital challenges. Meanwhile, smaller DTC companies like skincare brand Peace Out and clothing brand Ivory Ella have also found success on the platform with posts that have unexpectedly gone viral.

For Ellsworth, striking gold on TikTok took months of trial and error. Poppi was relatively new to the platform and jumping onto current video trends wasn’t yielding any success. Ultimately, Ellsworth deciding to “be authentic” and tell her origin story in an unfiltered manner was what ignited Poppi’s success on the platform.

“I personally am obsessed with TikTok and know it is the way of the future,” Ellsworth said, adding that her TikTok success has helped her understand the true potential of the platform. “It’s real and authentic. There’s no need to perfectly curate a campaign. It’s all about people connecting with people.”