WASHINGTON ― The way President Donald Trump tells it, his China travel ban was a gutsy move against the coronavirus that “pretty much shut it down coming in from China,” “stopped it,” and put the deadly virus “very much under control.”

Which of course raises the question: Why, then, does the U.S. have 61,167 coronavirus cases and 849 deaths as of Wednesday afternoon, with both numbers on the rise?

Jeremy Konyndyk, who worked in the Obama White House on the response to the 2014 Ebola outbreak, compared Trump’s move to France’s famously useless fortifications against the Nazis in World War II.

“The travel ban was his Maginot Line, the false sense of security that in fact left us hugely vulnerable to attack,” Konyndyk said. “Because it meant we didn’t man our other defenses.”

Global health experts agree that blocking travel from China made sense, particularly given the Chinese government’s attempts to cover up the severity and extent of the disease there. But they also agree that Trump should have simultaneously made it a top priority to set up an extensive testing regime to understand the spread of the virus and to equip hospitals and first responders with the ventilators, respirators and other medical supplies they now need as the disease inevitably spreads around the country.

“Once the virus is introduced to a community, unless it is contained it will grow exponentially. And that is what we are seeing now,” said William Hanage, an associate professor of epidemiology at Harvard. “Travel bans don’t help once the spread has already happened.” 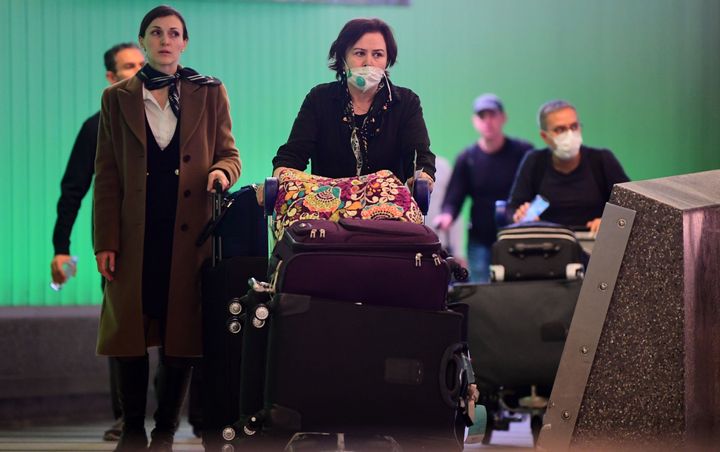 Trump, though, repeatedly claimed for weeks that his Jan. 31 decision, which banned foreigners who had been in China in the previous 14 days from entering the country, had saved the United States from COVID-19, the disease caused by the virus.

Speaking to a favorite interviewer on Feb. 2, Trump assured Fox News viewers that there was no reason to worry about coronavirus. “Well, we pretty much shut it down coming in from China,” he told Sean Hannity.

At a reelection rally in Charleston, South Carolina, on Feb. 28, Trump said: “A virus starts in China, bleeds its way into various countries all around the world, doesn’t spread widely at all in the United States because of the early actions that myself and my administration took against a lot of other wishes.”

On March 7, Trump declared: “It came out of China, and we heard about it. And made a good move: We closed it down. We stopped it.”

To this day, Trump continues to tout that decision as a brave call that others would not have made and which has kept Americans safe. “I made a decision to close off to China. That was weeks early. And, honestly, I took a lot of heat,” Trump said during an extended Fox News interview from the White House on Tuesday. “And I must say, doctors — nobody wanted to make that decision at the time. It was very, very early. Call it luck or call it talent. It doesn’t matter. We made a great decision.”

Trump’s claim that not even doctors supported his decision is false ― in fact, his own White House points to statements from doctors both inside and outside the administration supporting the China travel ban, which was later broadened to include foreigners who had been in Iran and Europe.

Outside experts, however, said that merely keeping out potentially sick foreigners does nothing to slow the spread of a disease that was already present in the United States before the Jan. 31 travel restrictions.

“By the time he imposed those measures we already had community spread underway. And the failure to test guaranteed we didn’t catch or prepare for it,” Konyndyk said.

Other countries that have done a better job slowing the spread of the virus ― South Korea, Germany ― worked hard to mass produce a test to figure out where precisely the disease was and how best to slow it. The Centers for Disease Control and Prevention, meanwhile, suffered technical problems developing a test for several weeks, yet failed to adopt a German test as a fallback.

That put the United States a good six weeks behind other countries in mapping the coronavirus’s spread and in ramping up the production and distribution of medical supplies.

During those weeks, rather than push his administration hard on either of those issues, Trump instead used seemingly every available opportunity to downplay the threat from the virus. He claimed ― falsely ― that the disease was no worse than the seasonal flu, that it was likely to go away on its own, and advised Americans to ignore it and invest in the stock market.

“Travel bans are easy, especially when, as in this case, the airlines had already curtailed service,” said Ned Price, a former CIA analyst and a spokesman for the National Security Council under President Barack Obama. “But they’re also not particularly effective when it comes to pandemics, and that’s especially the case when China was already weeks into the outbreak, and hundreds of thousands had already left the affected region.”

He added: “What’s harder, but far more effective at stopping the spread of a disease, is the blocking and tackling that should have come in the weeks, months, and even years before the first case of coronavirus emerged.”