Sen. Josh Hawley, R-Mo., railed against critical race theory, expressing concern that it is influencing the inner workings of the Biden administration as he opposed the nomination of Kiran Ahuja as director of the Office of Personnel Management.

In remarks on the Senate floor Tuesday morning, Hawley accused President Biden of nominating people “who do not believe that the history of this nation is worth celebrating,” but that the U.S. is “systemically racist” and unjust.

“It appears to have become the animating ideology of this administration,” Hawley said.

The diatribe was in opposition to Ahuja, who Republicans have accused of promoting critical race theory.

Ahuja also authored a blog post for the organization in June 2020 titled “Building an Anti-Racist Future.” In it, she wrote, “America was built by design. We are dealing with the cost,” after which she listed the names of George Floyd, Breonna Taylor, Nina Pop, Tony McDade, Ahmaud Arbery, James Scurlock and David McAtee.

Hawley accused supporters of critical race theory of believing that all Americans “are either oppressors or oppressed,” and that believers of the theory are “advocating for state sanctioned racism in the United States of America.” 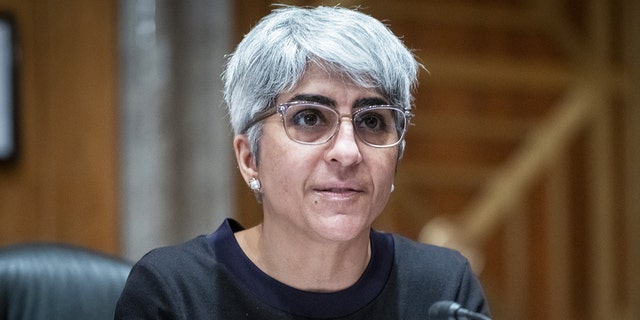 Kiran Arjandas Ahuja appears before a Senate Committee on Homeland Security and Governmental Affairs nominations hearing, to be Director of the Office of Personnel Management, in the Dirksen Senate Office Building in Washington. Featuring: Kiran Arjandas Ahuja Where: Washington, District Of Columbia, United States When: 22 Apr 2021 Credit: POOL via CNP/INSTARimages/Cover Images
(Reuters)

“I’m concerned that as the federal government’s HR director, Ms. Ahuja could use her platform to promote radical ideologies that seek to divide rather than unite the American people,” Hawley said, warning that she could include critical race theory in government training.

Hawley said he agrees with the Federal Law Enforcement Officers Association, which sent a letter to Sens. Rob Portman, R-Ohio, and Gary Peters, D-Mich., the ranking member and chairman of the Homeland Security and Governmental Affairs Committee, about Ahuja’s nomination.

The letter, signed by association president Larry Cosme, expressed concern over whether Ahuja was suited for the OPM position.

“With the diverse stakeholder status of the multiple federal employee groups, the recent citations of the nominee’s embracement of radical theories such as ‘critical race theory’ draws a large question as to this nominee’s ability to neutrality, fairness and impartiality,” Cosme said.