‘It will take us a few weeks to fully recover’: Staff shortages hit food retailers

Product shortages at major retailers such as supermarket Coles that have been caused by staff in isolation and bumper Christmas demand are predicted to last for weeks before shelves are fully stocked.

Coronavirus isolation rules have forced staff throughout the supply chain, from truck drivers to warehouse workers, checkout attendants and shelf stackers, to miss work in elevated numbers resulting in products such as fresh food not making it to stores in usual volumes.

“It will take us a few weeks to fully recover from this and, importantly, we need to get those team member numbers that are isolating back into the workforce to recover all of those food supplies,” said Matt Swindells, Coles’ chief operations officer. “So there’s a fair bit of work to do yet.”

But Mr Swindells also emphasised on Nine’s Today show that there was plenty of food for shoppers, especially if they were willing to make minor substitutions.

Coles has apologised to customers for any unavailable items and said it was monitoring the availability of staff.

The franchisee of one Brumby’s Bakery in the Melbourne suburb of Strathmore said it had been tough to roster enough staff on over Christmas and New Year because some were on holidays while others shared residences with people who had tested positive.

“I’ve had a number of staff members needing to isolate due to close contacts,” said the franchisee, Diana, who did not want her surname published. She has instead relied on casual staff, who she praised for working so hard. 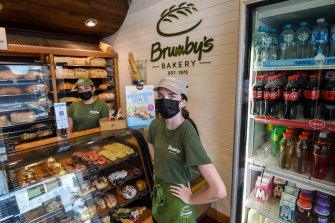 Several franchisees at Brumby’s Bakery have struggled to find enough staff due to isolation rules and holidays.Credit:Justin McManus

“The recent changes around workplace contacts were welcome, and helped things along, but where we’re struggling is staff who are returning negative RATs are still required to isolate.”

Billy Dows, general manager for Brumby’s at its parent company, Retail Food Group, said on Tuesday he had received four calls from franchisees in a similar position and despite running a recruitment drive he was struggling to find staff to bolster rosters. “It’s a problem out there,” Mr Dows said.

The recent staff shortages have compounded longstanding problems during the pandemic, including a tight labour market triggered by border closures and fewer migrants as well as supply chain issues abroad.

Fresh fruit and vegetables were among the goods Woolworths has grappled hardest with to get into its stores, in part because it sends many produce from a major distribution centre in Sydney that has had more staff than usual unavailable due to isolation rules.

“We’re currently experiencing delays with some of our stock deliveries to stores due to COVID-related impacts on our supply chain operations,” a spokesman said. “We have stock available within our network and our teams and suppliers are doing all they can to replenish stores as quickly as possible.”

In NSW and Victoria, people who encounter COVID-19 at work but feel well do not have to isolate unlike household contacts who face a week of isolation, even if they test negative on a rapid antigen test.

Australia’s problems with businesses being forced to limit operations because of missing staff mirror issues overseas. A shortage of truck drivers in the UK that saw petrol run dry at some bowsers, for example, was caused by a mix of the pandemic and the country’s exit from the European Union.

Dominique Lamb, the chief executive of the National Retail Association, one of two major trade groups lobbying for the industry, said she had to defer to health experts on pandemic rules.

But Ms Lamb also questioned how tenable isolation rules were in the context of a skills shortage, high vaccination rates and an increasing number of Australians receiving boosters.

“Do we just need to accept that we should, at some point, be free to move around the community without isolation?”

Gerry Harvey, founder of electronics and homewares retailer Harvey Norman, said its store network was doing better on staffing than most because many franchisees had their own warehouses, preventing bottlenecks.

He said staff were provided with daily rapid antigen tests, ensuring that the virus did not spread at its sites. “It has probably saved us from closing a number stores so far,” he said.