‘It’s a nightmare’: Grand Designs tests strength of family bond as they clash over a tree 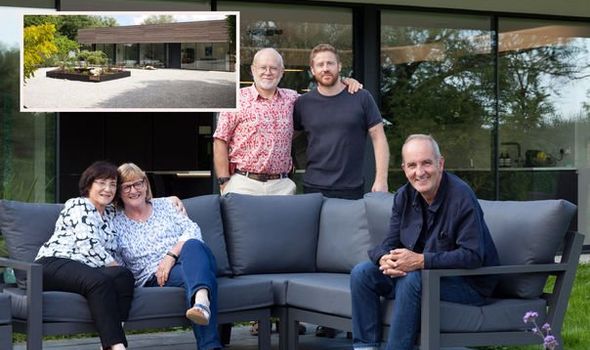 After losing her husband to a heart attack, Gretta decided to embark on an ambitious project which sees a new home inspired by Malaysian architecture built on a plot of land in her sister’s back garden. Her nephew, who is a qualified architect, is appointed to design the home, but the pair fail to see eye to eye over every decision.

Gretta, a widow and former teacher, had lived in Malaysia for 17 years with her husband, Ray, and two sons.

After losing her husband to a heart attack, Gretta decided to move back to the UK and live close to her sister, Mary.

She moved into a static caravan in rural Cambridgeshire opposite her sister and brother-in-law, Fernando, who were also living in a caravan, temporarily, while their home was rented out to help pay off a debt.

After buying a plot of land from her sister’s garden for £100,000, Gretta decided to build a new home on the space.

She appointed her nephew, Carlos, an architect, to design a modern home, inspired by architecture from the Far East.

Having chosen to feature burnt wood cladding in the design – traditionally known as Shou Sugi Ban, Gretta raised concern about the expense and suggested choosing a cheap render instead.

However, Carlos was less than impressed with the prospect of having to make compromises with the quality of the build.

“A change like this could really ruin the design,” he said. “A small change could make a big difference.”

Carlos’ dad, Fernando, also had reservations over the use of dark wood on the building’s exterior.

“I was never a fan of that because I think it looked a bit heavy,” he said, adding that he didn’t expect his son to back down easily over the choice in material.

“He will guard his design like a Pitbull Terrier,” said Fernando, who was keen to prove successful in his role as the project manager.

“Because I’ve never done this, I want to make sure the budget is controlled and we must not let Gretta down” he said.

While Gretta appreciated the creativity which had gone into the design, she said: “At the end of the day, it is going to be a home, it’s not a show house.

“I’m very excited about it all, and although I have fantastic family support, I’m doing it without Ray by my side, which is strange to think is happening.”

Conscious of the strain that the responsibility of the project would place on the family’s relationship, Gretta admitted she hoped there wouldn’t be “any fallings out”.

Tensions rose during the show when Fernando lost a beloved apple tree, which had grown on the land for more than a century.

Due to the close proximity to the new build, the tree had to be cut down, leaving Fernando disappointed and upset that the decision could not be avoided.

Describing the tree as his “baby”, which his children had “loved to play on” when they were younger, Fernando said: “It’s her land at the end of the day,” adding, “that’s one of the key issues of controversy.”

Further drama unfolded when Fernando struggled to organise where a lorry, carrying vital building supplies, could park to offload the materials.

He was forced to ask his tenant, who was moving out on the same day and required the space for several removal vans, to free up space on the driveway. Feeling the pressure of the fiasco, Fernando said: “It’s a bloody nightmare”.