CNN host Jake Tapper on Saturday acknowledged the risk of the coronavirus while reporting on spontaneous celebrations that broke out across the country after President-elect Joe Biden was declared the winner of the election.

“I hate to be a scold here, but we just had the highest day of infections in the United States," Tapper said during a CNN panel discussion after Biden's victory. "I believe yesterday was 125,000 Americans with new coronavirus infections. That was the third straight day of more than 100,000 infections. It’s good to see people wearing masks — although for some of them they’re slipping off their face."

It was a turnaround from the network's previous commentary on Biden celebrations, in which concerns about the possible spread of the virus were virtually non-existent.

He said people also need to socially distance while noting that doctors say mask-wearing is one of the most important steps that can slow the spread of the virus. 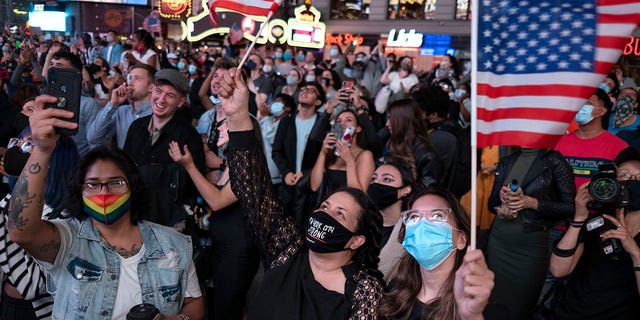 Tapper agreed many health officials would feel concerned about the massive crowds.

LIVE UPDATES: PEOPLE ACROSS US REACT TO  ELECTION OF JOE BIDEN AS 46TH PRESIDENT

"Where is @JoeBiden calling on the massive Super Spreader events held in his name to end?" White House Press Secretary Kayleigh McEnany tweeted in reaction to footage of a large crowd outside of the White House singing "YMCA."

"How the media shifted so abruptly from 'anyone going to a spacious beach is a super-spreading monster killing Grandma' to 'these mass, densely populated protests with people screaming on top of each other are so inspiring' was one of 2020's most credibility-destroying media acts," journalist Glenn Greenwald declared.

"This is all perfectly fine because, as we’ve learned, covid is a politically enlightened virus that spares those with the correct ideological leanings," Daily Wire writer Matt Walsh tweeted.

Fox News’ Joseph A Wulfsohn contributed to this report.