Jonathan Morris: A Catholic saint is canceled in Los Angeles and the Catholic Church is quiet

Los Angeles Mayor Eric Garcetti has made it official: he’s going to scrub the name and image of a Catholic saint from a city park that bears the saint’s name. Remarkably, barely a whimper can be heard from the Catholic Church in response to this aggression, despite the fact that Pope Francis himself proclaimed Junipero Serra a saint just a few years ago.

In 2015 Pope Francis canonized Fr. Junipero Serra, the 18th century missionary to California.  By declaring him a saint, the pontiff solemnly proclaimed that Fr. Serra had lived a life of heroic virtue, worthy of honor and imitation.

St. Junipero Serra is recognized as having brought Christianity to much of the Western United States and having converted thousands to the faith—including many Native Americans.

Just five years after Pope Francis canonized Serra in Washington, D.C. activists protesting the death of George Floyd tore down the statue of St. Junipero Serra in the park of his namesake. 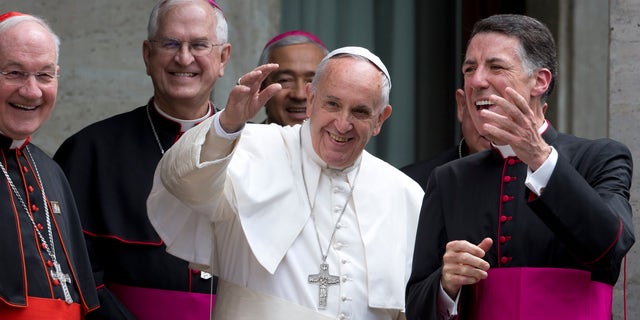 FILE – Pope Francis, flanked by rector of the Pontifical North American College James F. Checchio, right, Cardinal Marc Ouellet, left, and President of the United States Conference of Catholic Bishops Joseph Edward Kurtz, greets the faithful as he leaves Rome’s Pontifical North American College, Saturday, May 2, 2015. Pope Francis has praised the "holiness" of an 18th-century Franciscan missionary hell make a saint when he visits the United States this fall but whom Native Americans in California contend brutally converted indigenous people to Christianity. Francis on Saturday praised the accomplishments and qualities of Rev. Junipero Serra during a homily at a Rome seminary training future priests from North America. (AP Photo/Andrew Medichini)

On that day the city of Los Angeles failed to protect public property and has made no effort to replace the statue that is revered by millions of Los Angeles Catholics, representing, by far, the largest religious denomination in the city.

Even more surprising, however, is the fact the city is now rewarding the violent actions of protestors by scrubbing St. Junipero Serra’s name from the park and renaming it, for now, “La Plaza Park”—a boring name of no significance to anyone.  Mayor Garcetti has promised that the park will become a place for Native American rituals and ceremonies.

This is a nod to activists who have long criticized St. Junipero Serra as having disrespected Native American culture by converting so many Native Americans to Christianity.

It is a nod to activists and a slap in the face to Christianity.  At the heart of Christianity is a mandate given by the resurrected Jesus Christ to spread the Gospel to all nations of the world. 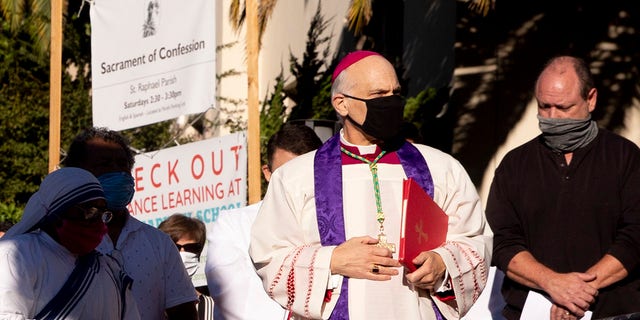 FILE – San Francisco’s Archbishop Salvatore Cordileone conducts an exorcism Saturday, Oct. 17, 2020, outside of Saint Raphael Catholic Church in San Rafael, Calif., on the spot where a statue of St. Junipero Serra was toppled during a protest on Oct. 12. (Jessica Christian/San Francisco Chronicle via AP)

In Matthew 28:16-20 Jesus goes up on a mountain and tells his disciples in the clearest of terms to make disciples of and baptize all nations “in the name of the Father, the Son, and the Holy Spirit.”

He didn’t say, “go now, and encourage all people to stay the same.” Precisely because St. Junipero Serrra obeyed the mandate of Jesus in such a remarkable way—not by force, but rather by persuasion and love—Pope Francis declared him a saint.

The reasons they give for discrediting St. Junipero Serra are shrouded by dishonesty. They use the strawman argument of decrying the serious abuse many Native Americans suffered by some Europeans and then suggest that because Serra was a Spanish missionary, he too abused Native Americans.

This is not true.

In fact, Junipero Serra famously formed a “bill of rights” for Native Americans living in the missions he established, and even walked hundreds of miles from California to Mexico City to present it to the viceroy.

Imagine for a moment if this had been a park honoring a Muslim prophet or if the statue had been an image of a Jewish Holocaust survivor.  We all know that the City of Los Angeles would not have dared to do what it is doing today. Muslim or Jewish leaders would have stood their ground and stopped the City in its tracks.  And they would be right to do so.

Why have their efforts to stop such civic injustice been so soft and ineffective?

The answer to both questions is simple:  weak leadership from the top that produces defeatism and shame among rank and file Catholics.

To be fair, a few Church leaders in California and beyond have made laudible efforts to stand up against the sacrilege of the rioters.

The Archbishop of San Francisco, Salvatore Cordileone, has visited two other sites where statues had been torn down.  There, he performed a religious rite called “exorcism,” a prayer to cast out evil and reclaim a person or place for God.

An auxiliary bishop of Los Angeles, Bishop Robert Barron (presumably, with the blessing of Los Angeles Archbishop, Jose Gomez) organized a group of Catholics to pray and counter-protest the rioters who tore down the statue of St. Juniper Serra in Los Angeles.

Bishop Barron and Archbishop Gomez have also taught convincingly about why St. Junipero Serra was a friend and defender of Native Americans, not an abusive colonizer.

But in these times, prayers of exorcism and small counter-protests are not enough to force political leaders to protect our religious freedom.

The pope should be leading the charge. His principal job is to teach and defend the Gospel and the Church’s moral teachings.

Pope Francis began his pontificate with massive good will among Catholics of all social and political leanings.  Over the last eight years, much of this good will has eroded as Catholics have become confused about the meaning of his many off-the-cuff remarks.

Pope Francis’ style is to ask more questions than he answers and leaves much up to interpretation. He often makes sweeping judgments about specific social justice issues with very little in-depth theological analysis to bolster his opinion.

Last week, for example, he praised the George Floyd protest movement and compared the protestors to the “Good Samaritan.” In that statement, he made no mention of some of those protestors who ripped down the statue of the saint he just canonized.  This is why so many politicians quote Pope Francis as they announce policies that conflict with the Church’s core teachings.

The philosophical enemies of religious freedom, clothed in pseudo-values of political correctness, cancel culture and “wokeness,” have organized themselves better, speak more loudly and use media more wisely than we do.

Unless the Catholic Church, beginning with Pope Francis (but extending to all local bishops and clergy) learns to speak more effectively and forcefully in our new media landscape about the non-negotiable beliefs and values that constitute the Gospel of Jesus Christ, it will continue to shed followers and influence.

Sometimes you have to change to stay the same.  If the Catholic Church doesn’t change the way it reacts to its philosophical enemies, it soon will have nothing left to fight for.