Kamala Harris’s Debate Fashion Statement Was So Subtle, You Likely Missed It

Just before the start of the vice presidential debate last night, I came across a tweet from actor and director Elizabeth Banks. “I hope Mike Pence smiles enough, is likable, and doesn’t comes (sic) across as angry,” she said, in the sarcastic missive that went viral. “Also, OMG, like, what’s he gonna be wearing?”

It was a searing critique of the double standards women are held to, a funny-because-uggggh-it’s-painfully-true summation. Senator Kamala Harris, the Democratic vice presidential nominee and the first Black and South Asian woman on a major party ticket, faces a particularly unfair and difficult tightrope in her bid to appeal to the American electorate—and that includes her choice of campaign clothing.

I hope Mike Pence smiles enough, is likable, and doesn’t comes across as angry at the #VPDebate. Also, OMG, like, what’s he gonna be wearing?

Notably, for the most visible moment of the campaign thus far, Harris opted out of the fashion discussion entirely. The senator chose a classic navy pantsuit and color-coordinating crew-neck top underneath. It felt very familiar to anyone who has kept an eye on her style over the last year of campaigning, first in the primaries and now for the general election. Harris, a former prosecutor and district attorney, has long favored the uniform of her profession. Lawyers often rely on dark suits in their court appearances for their serious sensibility, their usefulness in conforming to outdated masculine standards of what is appropriate.

A little peek at personal style or a moment of eye-catching fashion flare was accessible to these women. In ’08, Palin accessorized her suit with a pair of ruby-red heels. Consider, too, what Hillary Clinton wore for her trio of presidential debates in 2016. She chose a series of tailored pantsuits, all by Ralph Lauren. Her first look was a bold cherry ensemble, complete with a red lip and bow accents on her kitten heels. Her second and third appearances were navy and white suits, respectively. Taken together, the three looks form the American flag.

And Harris herself has dabbled in moments of fashion that show off her personality. For one of the primary debates last fall, she stood out on the crowded stage of Democratic candidates with a greige pantsuit and a deep scarlet pussy-bow top underneath. On the campaign trail this fall, she has made headlines for her fantastic footwear, including Timberland boots and her signature Converse sneakers. 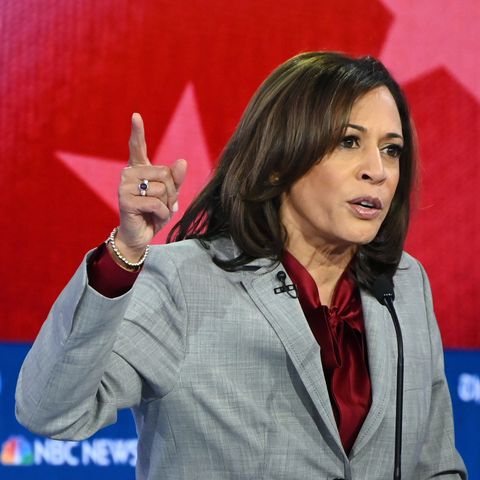 But for last night’s debate, Harris didn’t lean into fashion—and she had good reason. As a woman of color, she is held to an impossible standard. By not wearing anything that stood out as flashy or different, there was little to latch on to and criticize. (Although of course, Megyn Kelly still found a way.) Her choice also ensured there was no chance fashion could distract or even be a talking point. This is a somber moment in our history, with more than 210,000 deaths from COVID-19 and a president who refuses to condemn white supremacy. A classic suit, with no distinguishing or differentiating design elements, meant there wasn’t even a rush to identify the label. On the debate stage, with its royal blue background, the dark suit meant the viewer’s eye was drawn to her face—to her words.