Kerry Stokes to leave Seven Group in changing of the guard

Kerry Stokes will step down as the chairman of his majority owned Seven Group Holdings in a major shakeup for the company that reported a 440 per cent jump in net profits for the year to June 30.

Mr Stokes announced he would retire from the company’s board at the diversified holdings group’s annual general meeting in November, a move that will mark a shifting of the guard at the company and in corporate Australia. 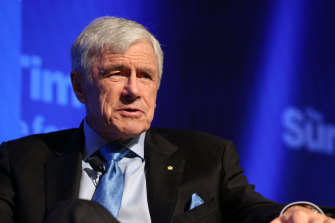 “SGH shareholders has an exceptional Board of experienced directors, a talented, highly capable and hardworking management team and a strategic portfolio of businesses.”

“I am very proud of SGH and its track record”.

“In reflecting on what SGH has achieved in terms of building stronger businesses and delivering shareholder returns, I am confident that I leave Seven Group Holdings in the best possible hands under the stewardship of Terry and the Board and the leadership of Ryan (Stokes).”

“Of course, I remain very committed to Seven Group Holdings and I will remain involved in the business in an advisory capacity. As a shareholder, I look forward to the company’s continued growth and prosperity.”

Seven Group, which owns the Westrac and Coates equipment leasing businesses as well as a large stake in Boral and Seven West Media, posted a full-year net profit of $634 million. The group is currently in the midst of a limited takeover of Boral which is expected to lift its stake in the building materials group to 35 per cent. The group said it would pay a final fully franked dividend of 23 cents per share, an increase of 10 per cent on 2020. The final dividend is payable on September 19.

Its bumper net profit was driven in part by the reversal of a nearly $100 million writedown of its stake in Seven West Media, given the improving performance of the owner of Seven Network.

Seven Group’s underlying earnings before interest and tax also rose during the period, up 7 per cent to $792.1 million, on the back of strong performance in its Westrac and Coates equipment leasing businesses.