Legal experts are warning that New York Gov. Andrew Cuomo’s alleged undercounting of nursing-home deaths amid the COVID-19 pandemic may rise to the level of a criminal offense.

Cuomo has found himself at the center of a federal investigation into whether his administration sought to hide the true toll of the pandemic.

The New York Post reported earlier this month that Melissa DeRosa, Cuomo’s top aide, told lawmakers it had withheld the numbers for fear of them being “used against us.” 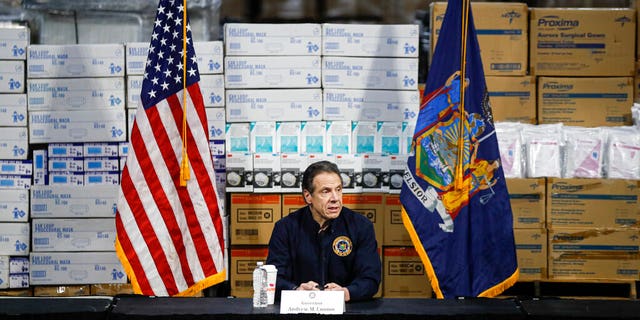 FILE: Gov. Andrew Cuomo speaks during a news conference against a backdrop of medical supplies at the Jacob Javits Center that will house a temporary hospital in response to the COVID-19 outbreak in New York.
(AP)

In an op-ed for the Wall Street Journal, John B. Daukas, who served as acting U.S. attorney general for the Justice Department’s Civil Rights Division, wrote that DeRosa’s reported admissions who that Cuomo’s administration “wasn’t merely negligent, but intentional and perhaps criminal.”

Daukas said numerous federal statutes could apply, noting that Cuomo’s administration is accusing of both making false statements to the federal government and trying to thwart an investigation.

“Even if it cannot be proved that the Cuomo administration knowingly provided false information to Justice and the (Centers for Medicare and Medicaid Services), New York’s willful failure to provide information may itself constitute a criminal offense—particularly if the intent was to thwart a federal investigation—which, after all, is exactly what Ms. DeRosa reportedly said the administration did,” Daukas wrote.

And on Saturday, Fox News legal analyst Gregg Jarrett said DeRosa’s admission to lawmakers – if true – constitutes a potential obstruction of justice charge. Per the federal statute, Jarrett noted, if a government official falsifies or hides evidence to avoid triggering an investigation (or acts out of fear that such a probe may occur) that official is still culpable under the law of obstruction.”

The nursing home scandal has dealt a harsh blow to the governor’s high favorability. Early on in the pandemic, the governor went on television for daily briefings that were paternal, almost philosophical, and also sharply critical of the Trump administration. They became must-see TV across the country, aided in part by his CNN news host brother.

But the nursing home issue exploded onto the political scene with two recent revelations. First, the state’s Democratic attorney general chastised the Cuomo administration for minimizing the death toll at nursing homes by excluding certain fatalities from the count. Cuomo’s administration then revealed at least 15,000 people living in long-term care facilities have died of COVID-19, nearly double the number Cuomo had initially disclosed.

“The nursing homes story really exposed quite a bit about questions about his leadership style and the success of his leadership during COVID,” said Christina Greer, a political science professor at Fordham University. “The governor wrote a book touting his accomplishments, and we don’t know if we’re halfway out of the pandemic.”