Magellan board, execs stung by equity loans as shares sink

Magellan Financial has imploded spectacularly with its share price trading at a seven-year low after high-profile founder, Hamish Douglass went on indefinite leave.

The only consolation for investors is that Magellan’s own leadership team, including former CEO Brett Cairns, Rugby Australia chairman Hamish McLennan, and Wallaby legend John Eales, are all sharing that pain.

Mr Cairns left early this year with a company loan of more than $4.6 million. It was used to acquire Magellan shares in November 2019 at $48.50 each under Magellan’s Share Purchase Plan (SPP) for employees and the board.

The stock dropped as low as $16.14 this morning which means the shares were worth $3.3 million less than what he paid for them. 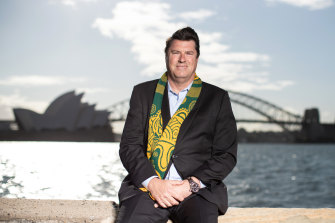 Rugby Australia chairman, Hamish McLennan, is among those who have made a loss on employee loans at Magellan used to acquire the investment group’s shares. Credit:Getty

Mr McLennan, Magellan’s current chairman, and Mr Eales – who also sits on the Flight Centre board – are also making a loss on shares they acquired under the SPP. As board members they only took out loans totalling $1 million each.

But the real issue – for Magellan insiders with SPP loans totalling more than $15 million as of July 1 last year – is that these loans are full recourse. That means they are liable for the debt even if the shares become worthless.

And this is precisely how the troubled company founder, Hamish Douglass, had designed it.

As he explained previously, share options and other incentive options create a “lack of alignment” with investors. Mr Douglass decided that loans to acquire shares are the best form of alignment.

In the case of directors, it also included relatively modest board fees that start at $73,000 a year.

“The board believes that non-executive fees should be modest and that when combined with a meaningful ownership stake, non-executive directors’ interests are better aligned with the shareholders when considering important strategic issues such as executive compensation, acquisitions, dividend policy, capital management, corporate transactions, … and ethical business practices,” Magellan’s 2018 annual report said.

According to Magellan’s 2021 annual report, a loan runs for a maximum term of 10 years by which time the outstanding balance has to be repaid by the participant.

A participant like Cairns, who leaves the company, must repay the outstanding balance within three months of leaving their role unless an extended period has been agreed to by the board.

And a participant cannot sell the shares until the loan is repaid.

“Following full repayment of the SPP loan, the holding lock and any security over the shares issued under the SPP is released and the participant has unrestricted access to the shares,” the latest annual report said.