Mike Pence: There ‘Will Be More’ Coronavirus Cases, Possible Deaths

“There will be more cases. There’s no question,” he said in an interview on NBC’s “Meet The Press,” during which he also accused Democrats of overhyping and politicizing the virus.

Pence, who was tapped by President Donald Trump last week to oversee the administration’s response to the outbreak, stressed that despite the recent death of a Washington man, “the vast majority” of cases will recover. Individuals facing the greatest risk of death from COVID-19 are those with other health concerns. 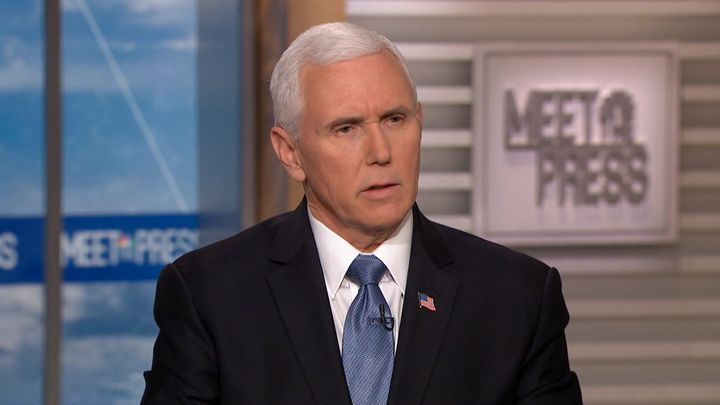 “For people that have other conditions that would militate toward a worse outcome … we could have more. We could have more sad news,” he said in a separate interview with CNN’s State of the Union. “But the American people should know the risk for the average American remains low.”

There have been 22 confirmed and presumptive positive cases of the virus in the U.S. since late January, according to the Centers for Disease Control and Prevention. This figure does not include the 44 cases involving people who were recently repatriated to the U.S. from Asia.

NBC’s Chuck Todd summarized the rate of death in the U.S. as “not reassuring.”

“It’s reassuring that so few have gotten it. It’s scary that in the very few cases we’ve had, we already have a death,” he told the vice president.

Pence responded by crediting Trump, saying it could have been worse if the president had not taken swift action, including suspending travel from China to the U.S.

The latest travel restrictions in the U.S. include any foreign national who has visited Iran within the last two weeks and a heightened travel advisory for specific regions of Italy and South Korea.

When asked about companies canceling overseas travel, Pence said he wouldn’t necessarily call that an overreaction. He also said that he believes Trump would respect “any decisions that are made at the state and local level,” should those responses involve closing schools.

“It’s a good time to use common sense,” he said.

Pence, in another part of the interview, accused Democrats of inflating fears of the virus in an attempt to hurt Trump.

“There’s been a lot of irresponsible rhetoric among Democrats and commentators on the left,” he said on NBC, after being presented with commentary from right-wing radio host Rush Limbaugh accusing Democrats of trying to “weaponize” the virus “to bring down Donald Trump.”

Pence, when pressed to name Democrats who have purposely inflated fears to hurt Trump, named a recent column in The New York Times that suggested renaming COVID-19 “the Trump virus.”

“When you see voices on our side pushing back on outrageous and irresponsible rhetoric on the other side, I think that’s important, and I think it’s justified,” Pence said.