Two high-profile international advisers at the journalism institute founded by billionaire philanthropist Judith Neilson have quit their positions as the embattled organisation commences a strategic review of its operations.

The Judith Neilson Institute has also paused part of its Asia fellowship program and other future projects as it works out how it wants to support public interest journalism financially in future. 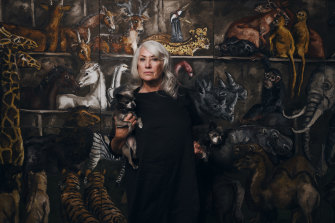 Billionaire philanthropist Judith Neilson wants her journalism institute to change direction. That decision has caused a mass exodus of advisers and directors.Credit:James Brickwood

The strategic review – and the widespread departures caused by a shift in vision by the institute’s billionaire founder – has now led to high-profile former US journalist Steve Coll and Lowy Institute fellow Richard McGregor severing ties with the organisation.

Coll and McGregor, also a former journalist, held positions on the institute’s 12-person international advisory council. The advisers provide advice on its vision and activities. The positions are not paid. Coll, a Pulitzer prize winner and dean of the Columbia University Graduate School of Journalism, confirmed he departed as a result of events over the past two months.

“I decided to resign from the advisory board because based on what I’ve read and been told about changes to the governance of the institute, I lost confidence that it would remain independent and devoted to the advancement of journalism in the ways originally conceived,” he told The Age and The Sydney Morning Herald.

McGregor, a former Beijing and Washington bureau chief for the Financial Times, was contacted for comment.

The exit of the two advisers and changes to programs have occurred in the three weeks since this masthead revealed the organisation’s four independent directors abruptly resigned from JNI, after becoming concerned that Neilson planned to be more involved with the self-described “independent” institute. The directors, who included chairman Jim Spiegelman, resigned weeks after Neilson sent a letter announcing she planned to remove executive director Mark Ryan from his position, and appoint her daughter, Beau, and lawyer, Daniel Appleby, as directors.

Neilson’s letter, which surprised the directors, also backpedalled on long-term plans for a coveted international prize for ideas, which was about to be announced. The plans were supported by the board including long-time adviser to Neilson, Jonathan Teperson, who resigned after Neilson changed her mind about the award. Neilson’s plans were also a shock to the international advisers, who had not been briefed on the shift in a new vision.

American journalist and international advisory board member Bruce Shapiro wrote a letter after the resignation, warning of the implications of a lack of independence. It was the view of Shapiro and others that it did not matter who was ultimately in charge, but a lack of independence would damage the good work of the institute. It was signed by four other members of the 12-person advisory council (two others intended to sign, but the letter was already sent). It is unclear whether Neilson has responded to the letter.

Ryan, a former adviser to Paul Keating and long-time adviser to the Lowy family, led the institute since its inception. He is still working with lawyers to negotiate his exit.

The Asia fellowship, first announced in 2020, was supposed to provide 12 early and mid-career journalists with a two-week trip to a country in Asia. It was conducted in partnership with the Journalism and Media Studies Centre at Hong Kong University. But sources close to the plans, who requested anonymity to speak freely, said JNI had paused the travel component.

An email sent to remaining fellows, seen by this masthead, says the institute put the travel plans on pause alongside other current projects that are not in “active delivery” until the review is concluded. The review is expected to take up to three months.

The institute provided assurances to media companies that are already benefiting from funding, such as Guardian Australia and Nine Entertainment Co (owner of this masthead), that they would continue to receive money. But it is unclear which other future programs are on hold.

There are also concerns about the fate of a $1.5 million global investigative journalism conference, which is supposed to be held in November 2023 in partnership with JNI.

The Global Investigative Journalism Conference is the world’s largest gathering of investigative reporters and editors. It has run in countries such as Brazil, Denmark and Germany, and Australia was going to be the first in Asia-Oceania to run the event.