A MYSTERIOUS spike in radiation levels has been detected over northern Europe and no one has claimed responsibility.

Several European authorities have revealed readings of an increase in human-made radionuclide particles in the atmosphere. 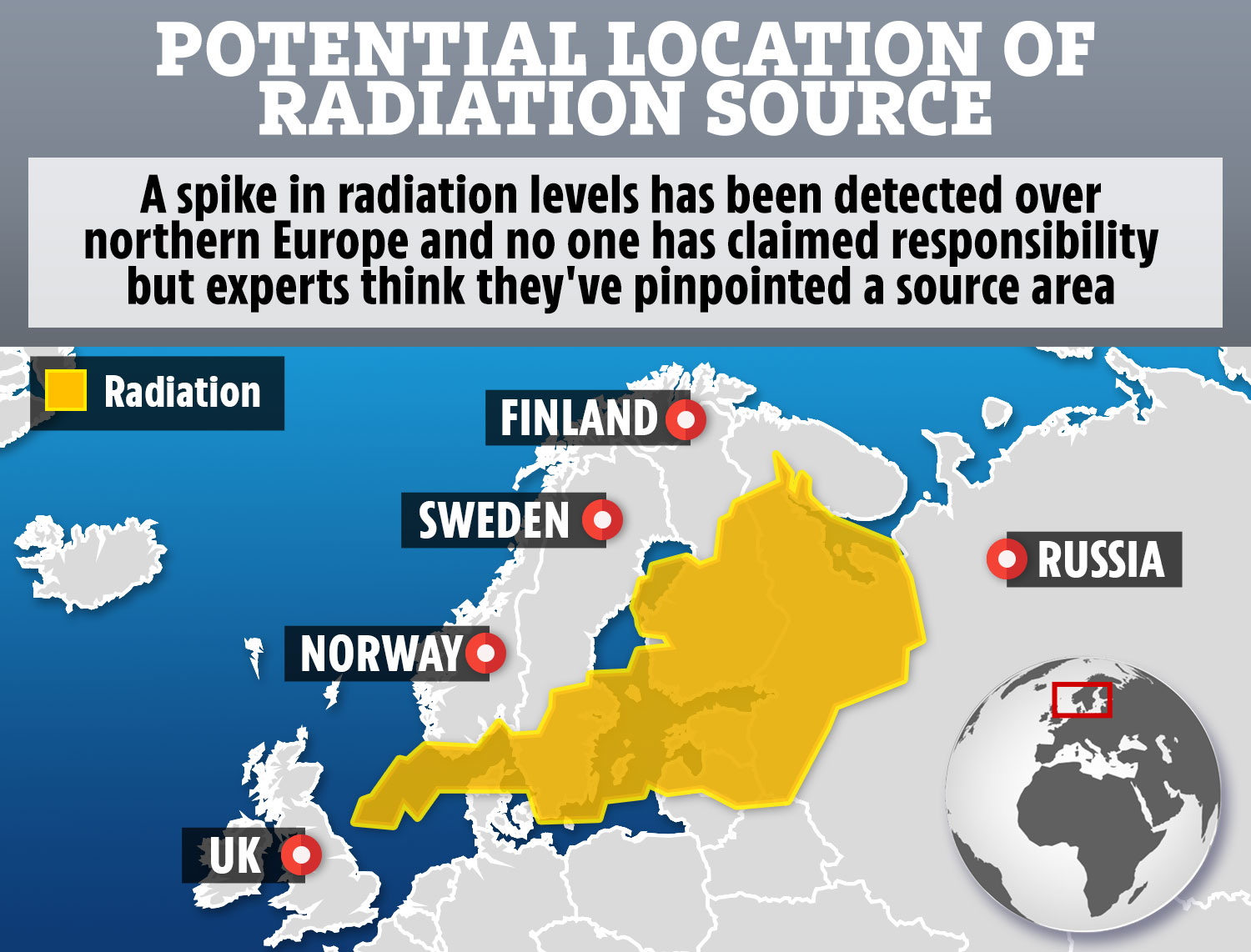 Fortunately, the levels of radiation are thought to be harmless to humans.

However, they're still large enough to be picked up by radiation monitoring sensors across the continent.

"The levels measured are so low that they pose no danger to people or the environment."

Lassina Zerbo, the Executive Secretary of the Comprehensive Nuclear-Test-Ban Treaty Organisation, then tweeted a map showing where the potential source of the problem is.

This showed that the possible reason for the anomaly could be in Finland, Sweden, Denmark, Norway or Russia.

However, the largest part of the selected zone was in Russian territory.

Zerbo said in a separate tweet: "These isotopes are most likely from a civil source.

"We are able to indicate the likely region of the source, but it’s outside the CTBTO’s mandate to identify the exact origin."

A civil source means the spike is likely related to something like a nuclear power plant and not nuclear weapons.

The Dutch National Institute for Public Health and the Environment (RIVM) has since said in a statement that "the combination of radionuclides may be explained by an anomaly in the fuel elements of a nuclear power plant."

It went on to say: "Some recent media reports claimed, possibly based on a mistranslation of our original report (in Dutch), that the radionuclides originated from western Russia.

"The claim RIVM makes is that the radionuclides travelled from the direction of western Russia to Scandinavia, but that no specific country of origin can be pointed out at this moment."

Although some people are pointing the finger in Russia's direction, a spokesperson for Rosenergoatom, the Russian nuclear power station operations subsidiary, disputed this.

"There have been no complaints about the equipment's work.

"Aggregated emissions of all specified isotopes in the above-mentioned period did not exceed the reference numbers.

"No incidents related to release of radionuclide outside containment structures have been reported."

It's currently hard to say whether experts will be able to confirm where the slight surge in radiation came from.

A similar incident happened in 2017 and many suggested Russian power plants were responsible for that radiation cloud.

These claims were also disputed by Russia.

According to a 2019 study in the journal Proceedings of the National Academy of Sciences, a Russian nuclear plant was a strong suspect.

Why is radioactive waste dangerous?

In other news, the Arctic is thought to have recorded its highest temperature ever of 38C.

Over 1,000 tons of plastic is raining down on the Western US each year, according to concerned scientists.

And, almost 20,000 tons of diesel has been released into an Arctic river in an ecological catastrophe.

Are you concerned about the nuclear radiation spike? Let us know in the comments…

Related posts:
Hot News
China GDP growth accelerates to 4.9%
PlayStation apologizes, clarifies PS5 voice chat recording feature details amid privacy concerns from players
What Analysts Are Saying About GoodRx After the Quiet Period
House Republicans urge Barr to appoint special counsel to probe alleged Biden revelations
Target to pay more than $70 million in bonuses to hourly employees ahead of holidays
European banks are set for a better earnings season as bad loan payouts stabilize
A chipmaker and railroad stock: Traders share the top earnings reports to watch
Recent Posts
This website uses cookies to improve your user experience and to provide you with advertisements that are relevant to your interests. By continuing to browse the site you are agreeing to our use of cookies.Ok