The Navy removed the first group of sailors from the service for not getting the COVID-19 vaccine, the service announced in a Wednesday statement.

The group, which included 20 sailors who had just entered active service, were removed via entry-level separations, causing them to be separated during their first 180 days.

On Dec. 15, Navy commanders were ordered to begin the separation process for sailors who declined to receive the COVID-19 vaccine.

In this Dec. 1, 2001, file photo, the American flag flies with a background of Navy midshipmen during the national anthem at the 102nd Army Navy NCAA college football game in Philadelphia, Pa. (AP Photo/Chris Gardner, File)

On Dec. 24, the littoral combat ship USS Milwaukee held off on deploying to South America following positive tests from some of its sailors, some of whom exhibited mild symptoms. The crew had been “100% immunized,” the Navy said at the time. 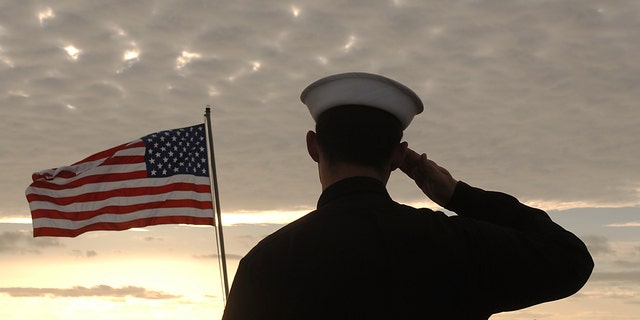 Sailors salute the American flag during the morning playing of the National Anthem, before the maiden voyage of the USS San Antonio (LPD-17) amphibious transport dock after her commissioning ceremony. (Photo by Robert Daemmrich Photography Inc/Corbis via Getty Images)

Vaccine mandates for the U.S. military have proven to be a point of contention that has led to several lawsuits. No branch of the military has approved a religious accommodation request for the vaccine.

On Monday, a federal judge granted a temporary injunction against a federal vaccine mandate for Navy SEALs who sued President Biden because they were seeking a religious exemption.

Judge Reed O’Connor, the U.S. District Court Judge for the Northern District of Texas, issued the stay in response to a lawsuit filed by First Liberty Institute in November on behalf of 35 active-duty SEALs and three reservists seeking a religious exemption, as first reported by Fox News Digital.

“The Navy service members in this case seek to vindicate the very freedoms they have sacrificed so much to protect. The COVID-19 pandemic provides the government no license to abrogate those freedoms. There is no COVID-19 exception to the First Amendment,” O’Connor wrote in his ruling. “There is no military exclusion from our Constitution.”

“We are aware of the injunction and are reviewing it,” said Pentagon spokesman John Kirby of the ruling at the time.

This story is breaking and will be updated.