NBN Co is proposing to slash prices on high-speed internet plans in an effort to win over the telecommunications sector and the federal government, which wants broadband to be affordable for all customers.

Communications Minister Michelle Rowland urged the company in charge of the national broadband network last month to go back to the drawing board, deeming an initial regulatory proposal “unsatisfactory”.

A new paper released by NBN Co in response to that request offers improved high-speed internet prices and the removal of a contentious pricing mechanism, which charges based on excessive data consumption, by 2026. 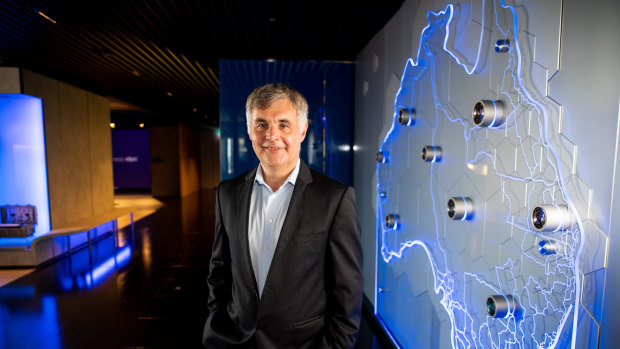 “The policy landscape has changed since we lodged our original proposed SAU [Special Access Undertaking] variation in March, allowing us to reconsider our proposal,” NBN Co chief Stephen Rue said.

“We need to maintain our ability to repay government and private debt and ensure we remain capable of achieving a standalone investment grade rating, without requiring any additional government funding beyond existing commitments.”

Already, the telecommunications sector is wary. TPG Telecom said it did not believe the proposal would deliver affordable internet to customers.

“We remain concerned NBN is focussed on providing cost savings for high-speed users, while pushing price increases across most of its low-speed services including its most popular 50Mbps plan,” a TPG Telecom spokesperson said. “While this may benefit the NBN’s bottom line, it is not in the best interests of delivering affordable broadband for all Australians.”

The spokesperson also attacked NBN Co for failing to share its proposal with the sector before distributing it to the media.

“There also continues to be a lack of accountability within the NBN for the significant time, effort and expense wasted across industry over the past 14 months to address the failings of the previous SAU proposal. The fact NBN did not share its new proposal with industry prior to distributing to the media first, highlights its views on so-called collaboration.”

The federal government last month confirmed NBN Co would remain in public hands “for the forseeable future”, a move which forced it back to the drawing board on a regulatory mechanism known as the Special Access Undertaking, which determines the quality of its services and how it charges wholesale customers such as Telstra, Optus and TPG Telecom.

Under a previous proposal, NBN Co planned to lock in price rises until 2040, and double the price of entry-tier plans over the next decade. Australia’s telcos have long argued the pricing structure of the NBN hurts margins and makes it difficult to predict monthly costs. The new proposal suggests removing the connectivity virtual circuit (CVC) charge, which increases with peak internet usage periods, by mid-2026.

But despite the initial drop in pricing, consumers and businesses will have to brace for yearly price increases linked to inflation, which NBN Co claims are needed to hit financial targets.

The proposal also includes larger discounts to wholesale prices for high-speed tiers by mid next year. The reductions are between 8 per cent and14 per cent across the various speeds when compared with the initial proposal NBN Co put forward in March.

NBN Co also released a set of benchmark services standards on end-use connections, service transfers and performance incidents, and proposed giving new powers to the competition regulator to reset the NBN’s revenue and pricing framework from 2032.

Optus’ vice president of regulatory and public affairs, Andrew Sheridan, said the paper gave the telco reassurance NBN Co was heading in the right direction. If NBN and industry continue to work constructively, Optus is confident we can provide Australian customers with the outcomes they deserve,” Sheridan said.

A Telstra spokesman said there were positive steps but some areas needed attention, including service quality.

“Our ambition through the process will continue to be ensuring the wholesale terms deliver better outcomes for our customers, sustainable industry economics and increased use of an important national asset,” the spokesperson said.

The discussion paper is subject to regulatory and industry consultation later this month.