It is an odd state of affairs when Network 10, home of Neighbours, Dancing With The Stars, Young Talent Time and It’s a Knockout, positions itself as more left-wing than The Guardian. But media in 2020 is nothing if not a whole bunch of weird. 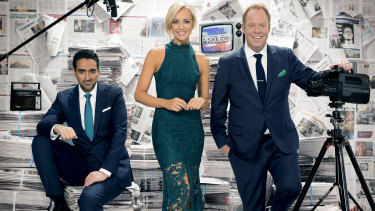 Such political positioning makes sense for a membership-funded newspaper founded after the 1819 Peterloo massacre, but little sense for a free-to-air network reliant on attracting a mass audience more concerned whether the new Bachelor will be as cute as astrophysicist Matt.

Ten has long had a progressive vibe, seemingly a good fit for the youth network. But lately it seems  amplified by The Project and a tendency for Ten presenters to wander off the reservation on social media.

At this point, two years after the CBS bought Ten, and two months after the $39 billion Viacom-CBS remerger, it is worth asking: does any of this make good business sense?

The Project is a case in point. It's a program that everyone seems to love – apart from the viewing public. It rarely troubles the top ten, its second half hour at 7pm is more popular with about 450,000 capital city viewers each evening, hovering at about 15th place.

Even in the coveted 16-39 youth demographic, more younger viewers are tuning in to Married at First Sight, Australian Survivor, A Current Affair and even the drama Doctor Doctor.

Millions watch Project clips on social media, so the show is noisy and influential, but that doesn’t help Ten’s coffers so much. As the TV mantra goes, revenue follows ratings.

The Project’s tense interview between Waleed Aly and Prime Minister Scott Morrison in the wake of the Christchurch massacre is instructive.

Some at Ten feel the interview didn’t go well, while the government would probably refuse the interview if it had its time again. And while Twitter (which only has 2.56 million active users in Australia) loved it, actual real television viewers, according to independent focus group research, disliked Aly’s attitude towards the PM.

Which brings us to Peter van Onselen, Ten’s political editor and frequent Project presenter, who doubles as a journalism professor and informed columnist for The Australian.

PVO is undeniably industrious and scoop-getting. But he can rise to anger quickly and give the appearance of conducting vendettas.  This was curbed at Sky News, where he fought a bitter behind the scenes war with other presenters. But it’s on full display at Ten.

“For someone who badges himself a professor of journalism, what he’s dishing up is the biggest load of tripe,” one gallery journalist says.

It is fascinating to recall how when van Onselen arrived at Ten his mission was billed as “explaining the upside to traditional conservatism to a younger audience”.

"I'm in no way, shape or form partisan," he said, which might cause Scott Morrison’s head of media Andrew Carswell to choke on his morning Nutri-Grain.

PVO didn’t take it well, releasing private texts between himself and Carswell and subsequently criticising the Prime Minister’s trip to Washington.  In the annals of journalism, it was hardly Walter Cronkite.

Which is not to say that relations between Ten and the government are fraught. van Onselen is on better terms with Carswell than he was with many of his predecessors.

PVO aside, there was also the #fakenews furore over The Project clip of the RFS volunteer Jackie telling Morrison he was “not my prime minister”. The bit with Jackie explaining she was a British citizen was left out. Ten, apologised, saying that bit of the clip was inaudible, but anyone could work it out from the context.

I’m not sure any of this is really where Ten wants to be.

Commercial television audiences are typically middle of the road to slightly conservative.

Ten puffs out its chest and points to six months of audience growth. Over summer it grew its share of the advertising market by four points to 20.5 per cent. But in the last year it showed the Big Bash League, it had 27.9 per cent.

The network surely can’t be profitable as things stand. Then again, does it even need to be? CBS  is still getting millions each year thanks to its content supply deal.  As such, Ten chief executive Paul Anderson actually might have an immunity idol up his sleeve.

Globally, ViacomCBS sees “direct to consumer” subscriber revenue as the path to growth. Australia is unlikely to be an exception. CBS and Ten are in a position where they could follow the lead of Disney by forgoing revenues and stripping content off rivals to build up a streaming service.

Locally, ViacomCBS has streaming service Ten All Access, and its assets are everywhere. MTV, Nickelodeon, Nick Jr and Comedy Central are on Foxtel, prestige drama Showtime is the centrepiece of Stan (owned by Nine, publisher of this newspaper). That Showtime contract runs out soon, and ViacomCBS will be seriously looking at its options.

And just like Survivor, Americans are very good at winning at television.