News Corp Australia is finalising plans to launch a bookmaking outfit this year in partnership with a consortium linked to gambling entrepreneur Matthew Tripp, and has picked the former boss of BetEasy to serve as its chief executive.

Rupert Murdoch’s news and media giant has been working on a local wagering strategy for more than a year, which has involved negotiating with several potential wagering industry joint venture partners. 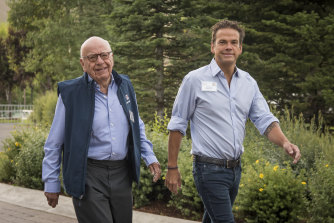 That search has now finished, according to several well-placed sources, who said News Corp had settled on an equity partnership with a group of investors associated with Australian online wagering pioneer Matt Tripp, and the Las Vegas-based online gambling investment fund Tekkorp.

It is unclear when the deal will be formally inked or when the new bookie will launch, but sources said News Corp had recently told top sports editorial staff that it could start advertising in the next month.

The launch of a new bookmaker with the backing of News Corp’s enormous media reach is set to shake up Australia’s wagering industry, which has consolidated in recent years. Major digital players Sportsbet and BetEasy merged in 2019 while the ASX-listed incumbent Tabcorp has continued to lose market share to online rivals.

Tripp is one of Australia’s most successful bookmakers, having built Sportsbet into the country’s second largest bookie behind the TAB and then establishing BetEasy in 2014 before selling it to Canadian gambling giant The Stars Group.

The industry sources, who spoke on the condition of anonymity to discuss confidential matters, said the new company was expected to appoint Andrew Menz as its chief executive. Menz was CEO of BetEasy and then chief commercial officer at Sportsbet when the two group’s parent companies merged. Menz left Sportsbet in May last year, fuelling speculation he would join a new venture being established by Tripp.

News Corp believes the betting venture will be a major driver of revenue to offset declines in its traditional print media assets. The strategy is thought to involve capitalising on the reach of its news mastheads, which include the Herald Sun and Daily Telegraph, and its 60 per cent ownership of pay TV provider Foxtel, which broadcasts sporting codes including the AFL, NRL and Australian cricket.

Tie-ups between broadcasters and bookmakers have become common in the burgeoning United States sports betting market, with broadcasters typically taking an equity stake in the betting outfit in exchange for sponsorship rights and brand promotion during live sports events.

The Murdoch family’s US media business, Fox Corp, launched the bookmaker FOX Bet in 2019, with the Canadian gambling giant The Stars Group taking a 5 per cent stake in the company. The Stars has since merged with Irish group Flutter, which owns Australia’s Sportsbet.

It is not clear how much each partner will own of the new wagering joint venture, but sources suggested News Corp will be a minority investor. News Corp previously explored using the FOX Bet brand, however, it is now expected the joint venture will launch a new brand instead.

Tekkorp, run by Australian entrepreneur Matthew Davey, is a private investment group that has taken major stakes in online gambling plays, including a 13 per cent stake in the ASX-listed wagering software group BetMakers.

BetMakers – which made an audacious takeover bid for Tabcorp last year – is in line to provide the technology platforms for News Corp’s bookie business, sources said, but will not have an equity investment.

Tripp made a $25 million investment in BetMakers in February last year and joined as a strategic advisor tasked with drumming up major deals. News Corp and BetMakers did not return calls on Tuesday afternoon. Tekkorp and Menz declined to comment when contacted.