News Corp’s Melbourne tabloid the Herald Sun has run an advertisement describing climate change as a “furphy” on the third day of a company-wide editorial series that explores the benefits of a carbon-neutral economy.

The advertisement was paid for by The Climate Study Group, which is led by two former directors of the Institute of Public Affairs, Tom Quirk and Bob Officer. Mr Quirk was previously director of the Australian Environment Foundation, the IPA-founded think tank chaired by Tom Bostock which features climate sceptic Peter Ridd among its ranks. 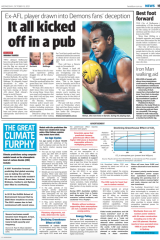 The half-page advertisement, which appeared in Wednesday’s newspaper edition on page 19, attempts to disprove research and climate predictions that have been made in decades prior. It tries to cast doubt over climate predictions formed using computer models were incorrect and had misdirected energy policy, and urges the government to stop subsidising renewable and allow technologies to compete on their merit. Its editorial series focused on reducing carbon emissions – “Mission Zero” – appears after the ad and runs across four-pages.

“Policy must also not impede building new efficient coal and/or nuclear power stations,” the advertisement states. It ran on page 19 in the Herald Sun, but did not run in other key tabloids such as The Daily Telegraph and The Courier-Mail.

Not much is known about The Climate Study Group, which has for years paid for ads to appear in The Australian. A 2017 advertisement by the group used Socratic questioning to disprove claims of human-caused climate change. A half-page ad in 2018 featured three charts which tried to disprove the science linking increased levels of atmospheric carbon dioxide to rising temperatures, frequency of storms and major tropical cycles.

“As Nine Entertainment is well aware the publication of an advertisement does not signify support of the advertiser or the subject matter by the masthead that publishes it,” a News Corp spokesman said. Nine is the owner of this masthead.

The ad has appeared on the third day of a two-week editorial series underway by News Corp’s metro tabloids that focus on ways to reduce carbon emissions. The editorial series officially launched on Monday with a 16-page wrap around every tabloid and a website called “Mission Zero 2050”. The coverage features business leaders such as Andrew “Twiggy” Forrest, Mark Carnegie, Visy executive chairman Anthony Pratt and Atlassian co-founder Mike Cannon-Brookes and is led by News Corp columnist Joe Hildebrand.

Rupert Murdoch’s global media empire has faced growing international condemnation and pressure from advertisers over its editorial stance on climate change, which has previously cast doubt over the science behind global warming and has since 2007 attacked various federal government efforts to reduce emissions.

“What you won’t find here is any partisan sniping or politicising of what is a mainstream national and international issue that affects all of us both environmentally and economically,” the website says. “Perhaps the major reason that action on climate change has so repeatedly stalled in this country is that the debate has fallen victim to a culture of constant complaint. That nothing is ever good enough and everything is too little too late.” The editorial series, which is running in the lead up to the Glasgow climate summit, has caught the attention of global outlets that are curious to see whether it could signal a permanent shift in News Corp’s editorial stance on climate change.

But the work has not been welcomed by everyone in the Rupert Murdoch-controlled media company. Prominent tabloid and Sky News commentator Andrew Bolt said this week the series was “rubbish” and that the “global warming propaganda” provided political cover for Prime Minister Scott Morrison, whose plan for net zero emissions by 2050 went to cabinet on Wednesday. A final Glasgow climate package is expected to be finalised after Nationals meeting this Sunday.

“Most of these same newspapers campaigned against Kevin Rudd’s global warming policies and against Labor’s later carbon tax,” Bolt said on Sky News. “You should worry when big business, big media, big government, they all get into bed like this.”