Nine Capitol rioters were charged with sexual assault or had restraining orders for domestic violence: report

At least nine men who participated in the Capitol riot on January 6 have a history of exhibiting violence against women, an investigation by the Huffington Post uncovered.

The Capitol riot on January 6 left at least five people, including one police officer, dead. Members of the Proud Boys, which is classified as a hate group by the Southern Poverty Law Center, were reportedly present.

Organizers were emboldened by President Donald Trump’s urges to protest the results of the 2020 election with him, despite Democrat Joe Biden’s election victory. While members of Congress were meeting inside the Capitol building day to certify the results, supporters organized an attempted coup and stormed the Capitol building.

Upon news that the riot breached the Capitol building, lawmakers began to shelter in place and many evacuated.

Nine men who were part of the storm were charged with acts of violence against women, HuffPost reported. Some had restraining orders taken out against them because of allegations of domestic violence.

Three of the nine men are veterans, HuffPost’s Alanna Vagianos reported. Men with militaristic pasts can create “dire consequences for women,” Vagianos reported, citing Dr. Miranda Christou, a senior fellow at the Centre for Analysis of the Radical Right.

“You have forms of masculinity that depend on militarized expressions: the uniforms, the guns, the paraphernalia, the whole idea of the military structure and discipline,” Christou told HuffPost. “When the institution of the military infiltrates social life and that sense of masculinity and what makes you a man depends on that ― depends on the gun on the side of your hip ― that becomes a problem for women.”

One man, Larry Rendall Brock Jr., stormed the building carrying zip-tie handcuffs and wearing full combat gear. Brock had sent several threatening messages to his ex-wife, HuffPost reported. He was described as a “terroristic threat of family/household” during one call to the police. 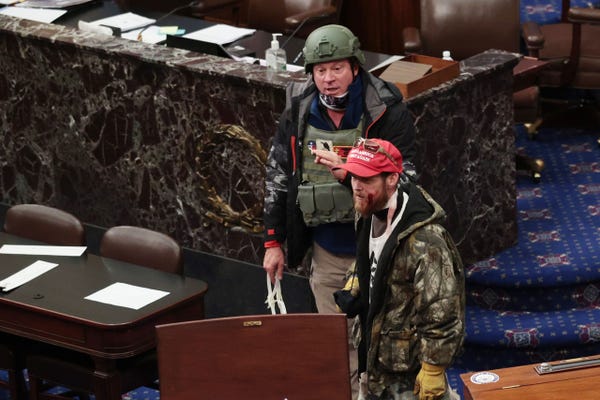 Another man, Guy Reffitt, was spotted and photographed carrying tactical gear during the attempted coup. Reffitt in 2018 pushed his wife onto a bed and began to choke her, according to a police report obtained by HuffPost. 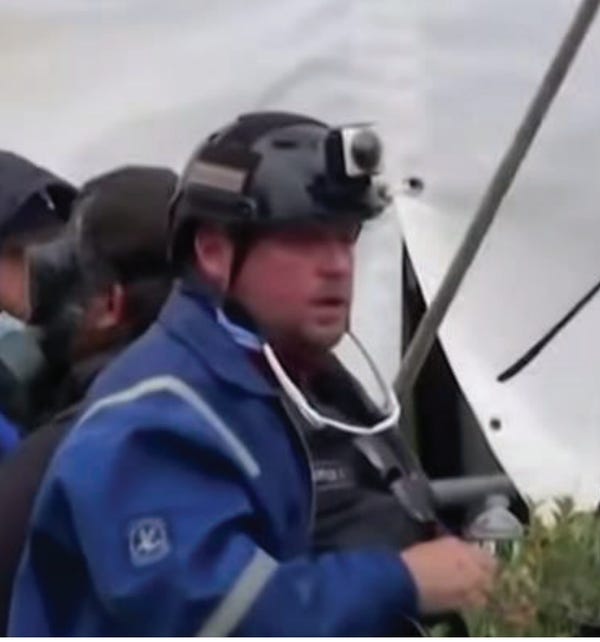 Mathew Capsel of Marseille, Illinois, violated a protection order after his arrest in Washington. In 2012, he had been arrested for “battery, mob action and robbery,” HuffPost reported, having allegedly struck a woman “3-4 times in the head.”

Other men who attended the riot have records marked by similar charges.

Jacob Lewis, for example, had a restraining order for domestic violence taken out against him in California, according to HuffPost. Samuel Pinho Camargo had in 2016 “intentionally caused bodily harm” to his sister.

Dominic Pezzola is a member of the Proud Boys, HuffPost reported. Police removed a shotgun from his home in 2005 after a call concerning a domestic dispute.

Andrew Ryan Bennett also wore a Proud Boys hat entering the Capitol building, according to HuffPost. He received an 18-month prison sentence after attacking a woman at a tattoo parlor in 2003.

Edward Hemenway served five years in prison on charges related to rape, sexual battery, and criminal confinement, according to HuffPost. He handcuffed his wife in 2004 and put duct-tape over her mouth.

And Donovan Ray Crowl had been arrested in 2005 for domestic violence charges that have since been dropped, HuffPost reported.

Anyone affected by abuse and in need of support can contact the National Domestic Violence Hotline at 1-800-799-SAFE (7233). Advocates are available 24/7 and additionally reachable by texting LOVEIS to 1-866-331-9474 or via live chat onthehotline.org