Netflix’s revelation that it will introduce commercials was met with a mix of shock, cheers and scepticism from an advertising community that’s been shut out of the streaming service up to now.

“I thought, there’s no way it’s going to happen,” said Brian Wieser, global president of business intelligence at GroupM, a WPP company whose clients include Ford, Google and Unilever. “It’s such a 180 from what they stood for.”

With TV viewership in decline, advertisers are flocking to the growing number of streaming services that include commercials, including Walt Disney’s Hulu, Comcast’s Peacock, Fox’s Tubi and HBO Max, now owned by Warner Bros. Discovery Inc. They’re all catering to consumers who are willing to sit through a few ads in exchange for paying a low monthly subscription fee or nothing at all. 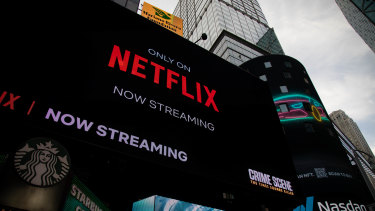 Netflix shares have tumbled almost 50 per cent from their November high.Credit:Bloomberg

But advertisers’ opportunities remain limited. Streaming services restrict commercials to just a few minutes per hour to avoid upsetting viewers. Netflix, which announced plans to create a lower-priced version of its service with commercials, would offer brands another opportunity to get in front of the cord-cutters who can no longer be reached on linear TV.

“The more ad-supported options in streaming the better for advertisers,” said Dave Campanelli, chief investment officer at Horizon Media, a media services agency that works with Corona, Geico and Capital One.

Netflix has allowed marketing before in the form of product placement on shows. But a lower-priced service with commercial breaks would be new. Whether advertisers embrace it depends on the details.

“I think there are still a lot of questions to be answered,” said Michael Law, US chief executive officer of the ad agency Carat, which lists General Motor, Intel and Procter & Gamble as clients on its website.

Those include how much viewer data Netflix is willing to share, how the company measures its audience and how many people sign up for the ad-supported version, he said.

Netflix’s practice of releasing all episodes of a season at once could also complicate its ad business, Wieser said. Advertisers typically secure TV commercials months in advance, but they can also buy spots mid-season if a show suddenly becomes popular.

Netflix could insert ads into shows that suddenly becomes part of the cultural zeitgeist, but that may be too late for advertisers.

“The bulk of the viewing would likely have occurred before an advertiser decided to build a campaign around the program,” Wieser said. “It can be easier to do this when a program runs over a conventional multi-month schedule.”

For Netflix, selling ads will require a shift in thinking. After years of focusing on acquiring subscribers and keeping them from leaving, Netflix will need to please advertisers too, said Dave Morgan, chief executive officer of Simulmedia, which helps marketers place their ads more precisely. It lists Walt Disney, Choice Hotels International and Expedia as customers.

“They will need more than subscribers that binge-watch, they will need viewers watching ad-supported programming each and every day,” Morgan said.

Brad Adgate, a media consultant, wasn’t surprised that Netflix embraced ads. The company needed another revenue source given its big investment in programming and slowing subscriber growth, he said.

Netflix Co-Chief Executive Officer Reed Hastings announced the plans to look at advertising came after Netflix on Tuesday posted a loss of 200,000 customers in the first quarter — the first decline in a decade — and forecast a drop of 2 million this quarter, causing its stock to lose more than a third of its value. The company will work on creating an ad-supported version of the service over the next year or two.

“Based on the dismal outlook on their subscriber counts,” the announcement of an ad-supported tier “deflected some of the negative news,” Adgate said. “That became the lead.”

Hulu generated $US3 billion ($4 billion) in ads last year, with about 88 per cent of subscribers choosing an ad-supported plan, notes Michael Morris, an analyst with Guggenheim Partners. He estimates that commercials could contribute $US4 billion to profits for Netflix by 2030.