Homes and businesses on the east coast are facing the threat of gas shortfalls from 2024, prompting the competition watchdog to warn the nation’s liquefied-gas exporters are failing to live up to a promise they would maintain sufficient local supply.

While the market was likely to have enough supply this year, the Australian Competition and Consumer Commission (ACCC) describes the outlook as “finely balanced” and forecasts shortages in southern states within two years that could hike costs for households with gas heaters and intensify pressure on gas-reliant manufacturers already struggling to remain viable. 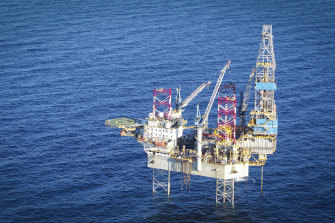 ExxonMobil operates the Bass Strait oil and gas fields in a joint venture with BHP.

The longer-term outlook was “even more concerning”, said ACCC commissioner Anna Brakey, as gas shortages threatened to spread across the whole east coast market by 2026.

“Commercial and industrial users are feeling the impact of this,” she told the Australian Domestic Gas Outlook conference on Tuesday. “They have told us they are receiving limited offers.”

In her speech, Ms Brakey took aim at Australia’s large producers of liquefied natural gas (LNG), saying the industry has been delivering less gas into the domestic market over the past five years.

“It’s this rapid and significant reduction in domestic supply from LNG producers that is contributing to the tight and uncertain conditions in our domestic market, and, to be clear, this is at odds with what the government was told before the LNG projects were developed,” she said.

“Gas companies assured governments that there would be sufficient supply and domestic gas prices wouldn’t go up, but it hasn’t turned out that way.”

The prospect of a looming gas shortage has been intensifying concerns among manufacturers already struggling to absorb higher-priced gas supply contracts. Last year, fertiliser manufacturer Incitec Pivot openly blamed gas prices when it announced it would shut down its 50-year-old Gibson Island plant in Brisbane.

Representatives for Australia’s gas industry on Tuesday said the domestic market was adequately supplied. “In terms of current supply, the ACCC itself has confirmed on 11 consecutive occasions that there’s no shortfall,” said Andrew McConville of the Australian Petroleum Production and Exploration Association. “Australian gas is flowing to Australian customers – with more than one new gas supply agreement per month for the past nine years – and international gas prices are currently at up to 80 per cent higher than domestic prices.”

Ms Brakey said the ACCC recognised that gas prices in Australia had not reflected the large increases seen in international LNG markets. “And that is very welcome,” she said, but stressed it was “absolutely vital” for companies to comply with an undertaking to offer uncontracted gas supplies to local customers with reasonable notice and on competitive market terms before offering them for sale overseas.

‘Gas companies assured governments that there would be sufficient supply and domestic gas prices wouldn’t go up, but it hasn’t turned out that way.’

Natural gas remains widely used, and short-term demand has been building worldwide because of the war in Ukraine as utilities race to find alternative supplies to Russian gas to keep lights and heaters on. However, efforts are under way in Australia and around the world to cut the consumption of gas and other fossil fuels to reduce planet-heating greenhouse gas emissions and avert catastrophic global warming.

In Victoria, the Andrews government is conducting public consultations for a Gas Substitution Roadmap that will outline plans to achieve Victoria’s emissions reduction targets including using electrical appliances for heating rather than gas, improving energy efficiency and focusing on alternative fuels such as hydrogen or bio-gas.

ExxonMobil, which runs the Bass Strait gas fields in a venture with BHP, is growing increasingly concerned about the prospect of aggressive government targets it fears could seek to cut Victoria’s gas usage by up to 50 per cent by 2030. The company on Tuesday warned such a push could deter investments needed to maintain supplies in the near-term and risk driving up prices for consumers.

Ralph Griffiths, energy strategy director at Victoria’s Department of Environment, Land, Water and Planning, said the government was still examining “potential pathways” to reduce gas demand in line with its net-zero emissions commitments, and specific policy positions had not been finalised.

However, he said the government’s modelling had found switching from gas-based cooking, hot water and heating to efficient electrical appliances could save up to $800 a year in household energy bills and $1100 for homes with solar panels, while at the same time freeing up scarce gas supplies for industrial customers that could not easily electrify.

“For many years, gas has been cheaper and less-emissions intensive than electricity,” Mr Griffiths said. “This is no longer the case in Victoria.”