James Packer has indicated he is open to selling his 37 per cent stake in the crisis-stricken casino group Crown Resorts following an $8 billion takeover offer from private equity giant Blackstone.

But the reclusive billionaire has also reversed his earlier position of leaving any deal in the hands of Crown’s board, saying he will independently assess the merits of any sale proposal. 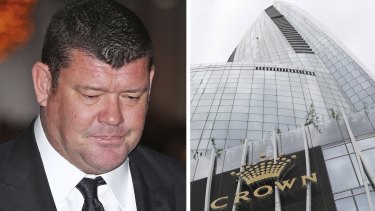 James Packer’s private company says it is open to a takeover of Crown Resorts but will make up its own mind on any deal. Credit:Getty/Nick Moir

Mr Packer’s private company, Consolidated Press Holdings (CPH), said in a statement on Tuesday that it had hired investment bankers at Moelis Australia to advise on any possible deal stemming from Blackstone’s offer.

The US private equity investor already owns 10 per cent of Crown and lobbed its $11.85 per share takeover offer on March 21, valuing the company at about $8 billion and Mr Packer’s stake $3 billion.

“CPH welcomes the Crown board’s announcement that it will commence a process to assess the proposal and it will also engage with relevant stakeholders including regulatory authorities about the proposal,” the CPH statement said.

“CPH is open to considering, and will independently assess, any suitable transaction for Crown shares that may eventuate.”

Mr Packer has been looking to reduce or exit his stake in Crown – which holds the majority of his wealth – for several years. But the assertion that CPH will “independently assess” any deal with Blackstone is significant, after Mr Packer told the Australian Financial Review last month he was “following the Crown board” in regards to his position on selling his stake.

That gave rise to speculation Mr Packer would not engage with Blackstone individually and let Crown’s fate be determined by its board, led by executive chairman Helen Coonan.

Reserving the right to make his own call on any bid means Mr Packer will likely be the kingmaker in any deal, with the voting power to block any proposal he finds unsatisfactory.

Market watchers widely viewed Blackstone’s offer of $11.85 per share as too low, with Crown’s shares immediately jumping higher than the offer price. The stock was trading flat at $11.90 on Tuesday afternoon.

All three of Mr Packer’s representatives on Crown’s board resigned after the damning Bergin Inquiry into Crown’s NSW casino licence. The inquiry found that the billionaire major shareholder had a “deleterious” influence over the company that must end if it was to become a suitable company to hold the licence for its new Sydney casino.

NSW’s gambling regulator, the Independent Liquor and Gaming Authority, has not said whether Mr Packer ending his representation on Crown’s board is enough to address his influence over the company given he will still be able to cast 37 per cent of the votes at annual general meetings via his dominant shareholding.

Separately, Crown said on Tuesday that its new director Nigel Morrison had received probity clearance from gambling regulators in Victoria, NSW and WA, enabling him to start his role on the board.

The company announced the appointment of the former chief executive of Auckland’s SkyCity casino in January after its board was gutted in the fallout from the Bergin inquiry, which triggered the resignation of CEO Ken Barton and five directors.

Morrison has 20 years of experience in casino management, including a stint at Crown Melbourne and at Tasmania’s Federal Group, raising speculation he may take on an executive director role while Crown looks for a CEO.

Crown is now facing royal commissions into its licences in Victoria and WA in the fallout of the Bergin inquiry, which found the company had facilitated money laundering and went into business with figures linked to organised crime.