A major plastics recycling plant will be built in Albury at a cost of about $30 million to manufacture plastic for the food and drinks industry and divert material from overseas landfill.

The facility is expected to process about 28,000 tonnes of plastic bottles and other recyclables per year, with Pact Group and Asahi Beverages committing to buying most of the recycled material.

The plant, which is expected to be operational by December 2021 and generate about 30 local jobs, was announced by plastic packaging maker Pact Group as it released its half-year results on Wednesday. 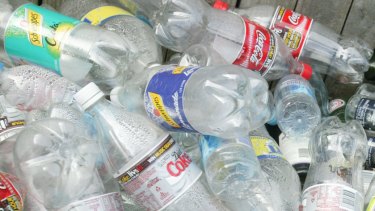 A new $30m plastic recycling plant will be built in Albury.Credit:Quentin Jones

Pact chief executive Sanjay Dayal said the company had signed a memorandum of understanding with Asahi Beverages and Cleanaway Waste Management to jointly develop the facility. The NSW government will also provide a grant.

"If you look at the total recycled quantity, it's over 500 million recycled bottles that we can make out of the 28,000 tonnes," Mr Dayal told The Age and The Sydney Morning Herald.

"Instead of going into landfill they are going to be recycled," he said.

Asahi Beverages' group chief executive Robert Iervasi said "this venture will allow us to utilise Australian-sourced recycled plastic resins to assist in meeting our sustainability commitment to transition our portfolio to recycled plastics".

Australia's waste industry has been in crisis since 2018, when China banned 24 types of waste and implemented tough restrictions on the amount of contamination allowed in waste imports. Last year Prime Minister Scott Morrison announced a ban on the export of waste plastic from Australia.

Pact also reported a first-half statutory net profit of $35 million, up from last year's $320 million loss, but recorded a 3 per cent dip in revenue to $886 million and said it will not pay an interim dividend.