Pharma deal could be Kodak’s moment to forget

When Donald Trump announced plans to lend Eastman Kodak $US765 million ($1.06 billion) to fund its shift from photography to pharmaceuticals, he hailed it as "a historic agreement with a great American company".

In a bid to reduce reliance on foreign companies for raw materials, last month the US government selected the former giant of the photography industry to make ingredients used in drugs to fight coronavirus.

Shares in the firm skyrocketed on the news, with the New York Stock Exchange halting trading as many as 20 times the day after the announcement, as Kodak's stock climbed as much as 650 per cent. 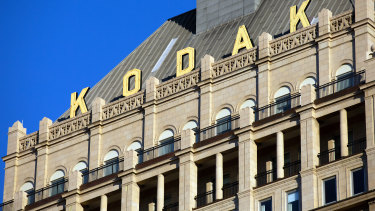 But just a week later, the deal was put on hold and Trump had absolved himself of any connection to the agreement. "I had nothing to do with that deal," he told reporters at a daily press conference.

Shares have since tumbled, leaving opportunistic investors feeling bruised. From a peak above $US33 towards the end of July, they closed last week at $US8.43. Trump's comments came after Kodak's loan agreement was put on hold, with the US International Development Finance Corporation citing "serious concerns" over "recent allegations of wrongdoing".

"We will not proceed any further unless these allegations are cleared," the body added.

Investigations by Congress and the Securities and Exchange Commission have since commenced, which could see Kodak lose the loan.

A Kodak spokesman says Continenza has regularly purchased shares in the company with his own money since he joined the board in 2013, adding that he has not sold any of his shares during that time.

To onlookers, the decision to choose Kodak to produce key ingredients for use in potential coronavirus treatments appeared dubious from the start. Kodak, founded in 1880 by George Eastman, was for years synonymous with household cameras and family snapshots. But in 2012, it was forced to file for bankruptcy after becoming weighed down by pension costs and its failure to keep up with the shift to digital cameras, despite having launched the format itself. After emerging from bankruptcy in 2013, Kodak embarked on a string of peculiar business ventures.

Despite its new strategy being to focus on printing equipment and services to businesses, in 2018 the firm went on to launch KodakCoin, a cryptocurrency for photographers. 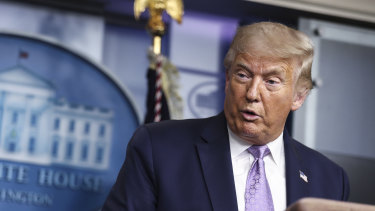 Trump’s decision to grant Kodak funding raised eyebrows in particular due to its limited track record as a pharmaceutical player.Credit:Bloomberg

The day before its foray into digital currency was announced, Kodak's directors were issued hundreds of thousands of shares. Kodak's stock tripled in value overnight but the timing of share grants was brushed off by the company as "a coincidence".

Aside from its various gambles on faddish ventures, Trump's decision to grant Kodak funding raised eyebrows in particular due to its limited track record as a pharmaceutical player. "It was an odd decision to pick Kodak when there are obvious generic manufacturer candidates out there," says Adam Barker, an analyst at Shore Capital.

He adds: "Since the coronavirus outbreak and the issues over trade relations with China, there's been a lot of noise about trying to shore up manufacturing to a more local level, especially of vital products such as antibiotics, a lot of which for the US usually come from overseas.

"So it's understandable the US wants to drive manufacturing of drugs more locally, but you think if you were going to do that, you would give that investment to someone more established. Kodak will need to build up the necessary infrastructure and I'm not sure at the moment that they've got the experience to hit the ground running fast enough."

Kodak maintains that it has more than 100 years of experience in chemicals and has been manufacturing unregulated key materials for pharmaceuticals for more than four years.

However, scepticism remains. A reported surge in spending on government lobbying provides some insight into Kodak's sudden phoenix-like rise out of the ashes last month. Earlier this year, Kodak's dormant in-house lobby division was resurrected, with public Congress files revealing it ploughed $US870,000 into lobbying activities between April and June, the most it has spent on lobbying in any quarterly period in its history.

Kodak had previously not spent any money on lobbying since the first quarter of 2019, when it paid out $US5,000.

The spokesman for Kodak says: "With the onset of COVID-19, Kodak, like many businesses across the country, explored federal support for the company and our workers, as well as opportunities to assist the government, on the state and federal level, in response to the pandemic.

"This included our application for a federal loan to support the launch of Kodak Pharmaceuticals, with the intent to bolster the domestic response to COVID-19."

A Kodak "moment" used to be the byword for capturing a moment in time worth savouring and cherishing.

Pending findings of the SEC's investigation, events over the past weeks may prove this to be a moment that Kodak wishes to forget.

Related posts:
Hot News
Investors should allocate up to 20% of their portfolios to China over the next decade, strategist says
European Shares Edge Higher On Covid-19 Vaccine Hopes
‘Growth projections have to be taken with a pinch of salt’
Australia Demands China Apology for ‘Repugnant’ Afghan Tweet
Biden Picks Signal a Priority to Lift Black, Low-Income Workers
Treasury Wine to Divert Labels From China as 169% Tariffs Bite
Utah Rep.-elect Owens knocks Dems for 'hating business owners,' says GOP 'freedom force' will fight back
Recent Posts
This website uses cookies to improve your user experience and to provide you with advertisements that are relevant to your interests. By continuing to browse the site you are agreeing to our use of cookies.Ok