While President Donald Trump and former Vice President Joe Biden have been crisscrossing the country on the campaign trail, construction crews have been getting to work installing fortifications for stores across the US. Both are in anticipation of Election Day

Fearing potential civil unrest stemming from the contentious contest between Trump and Biden, retailers have begun boarding up their shops in preparation for violent encounters and looting that could result in billions worth of property damage. Plywood and metallic covers now shield storefront windows in an attempt to protect them.

Shopping districts electing to stay open have implemented emergency plans in case the day turns violent, utilizing heavy-duty trucks to control protests. With the election results not likely to be known on election night due to an influx of mail-in and absentee ballots, the unrest could spread to later in the week.

Retailers are hoping to avoid a repeat of the George Floyd protests that inflicted between $1 and $2 billion in damage, insurance claims reveal. Protests have resume more recently in Philadelphia, where a Walmart was looted following the killing of Walter Wallace Jr. at the hands of police on October 26.

Take a look at the scene across the country as retailers hunker down, hoping for the best but preparing for the worst.

Retailers are expecting Election Day to be the catalyst for civil unrest as a turbulent campaign season amid a pandemic comes to a close. 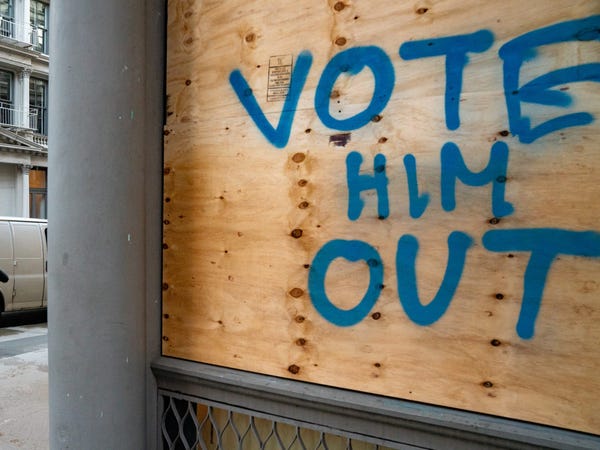 Violent protests in recent months have encouraged retailers to be prepared for anything to avoid the billions in losses that were suffered over the summer. 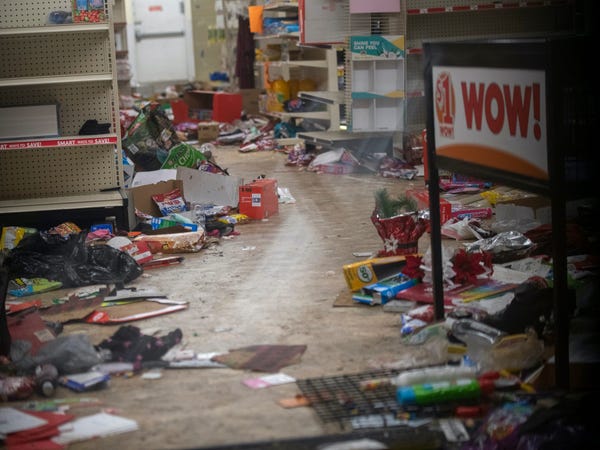 The past few weeks in Philadelphia have seen looting in response to the killing of Wallace, prompting the deployment of around 1,000 National Guardsmen. 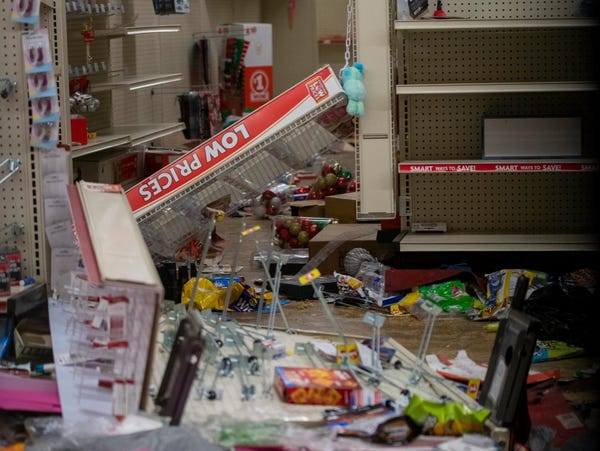 In Los Angeles, stores lining the famed Rodeo Drive will be closed and access to the street itself completely restricted. 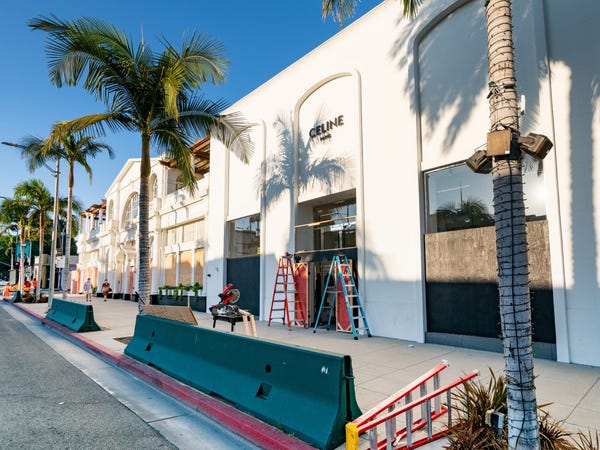 Known for its high-end shopping experience, retailers there include Ralph Lauren, Gucci, Cartier, and Hermes. Their windows hidden by plywood boards. 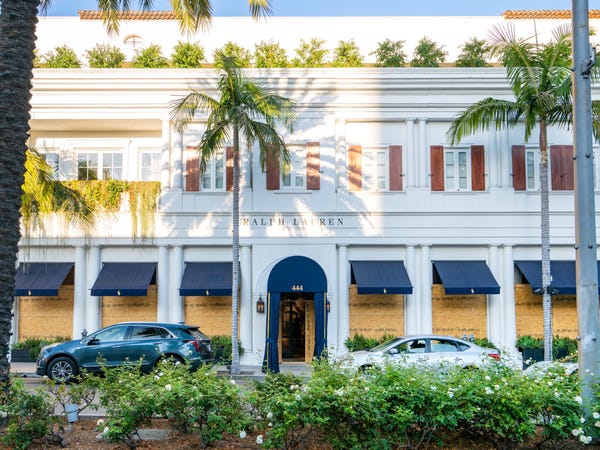 Police began restricting access to the street on Monday just before midnight. 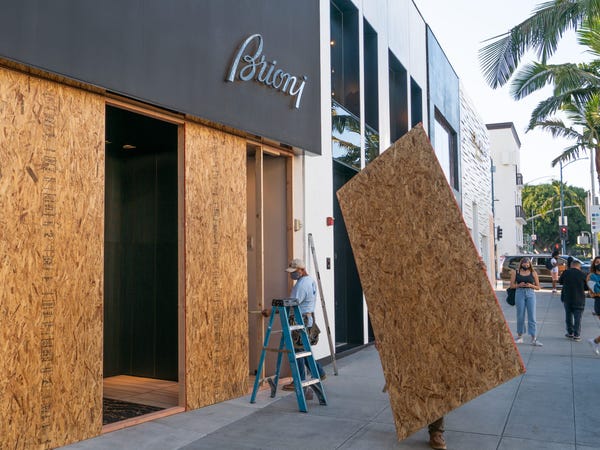 The street will remain closed until it's deemed safe to reopen, which might not be anytime soon as ballots will be counted in the days and weeks following Election Day. 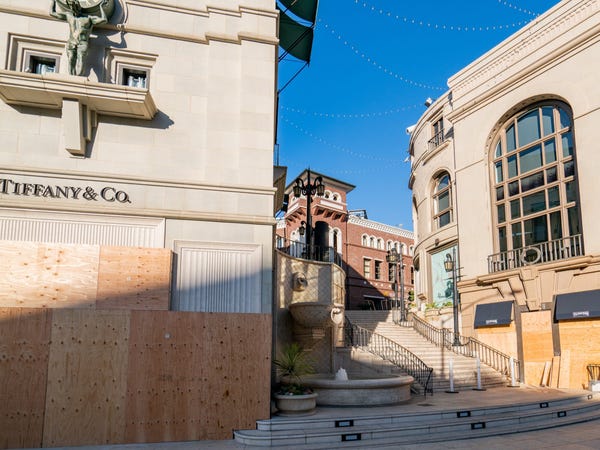 Unbreakable window glass is also in high demand but short supply, leading one supplier, Riot Glass, to turn away new clients to service existing ones. 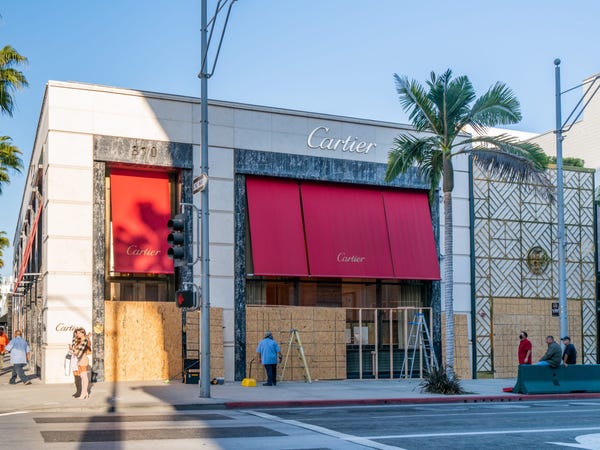 ServiceChannel, a broker for construction work, has seen $20 million in invoices placed through its platform for work stemming from potential civil unrest concerns. 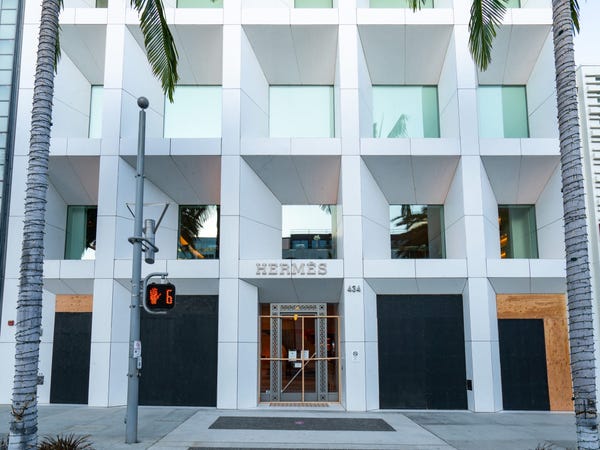 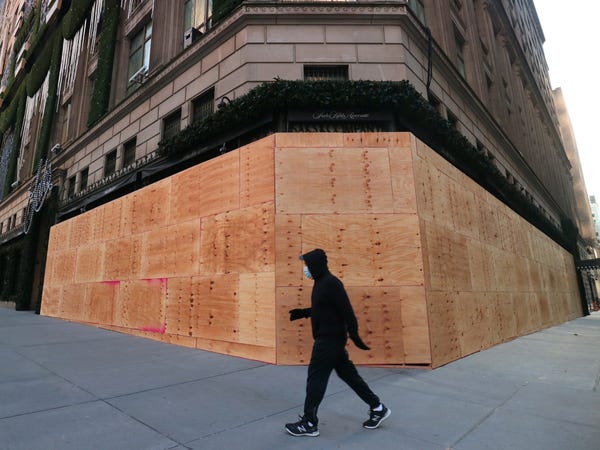 It can cost upwards of $30,000 to fortify a storefront, depending on its size — a price not all shops can afford. 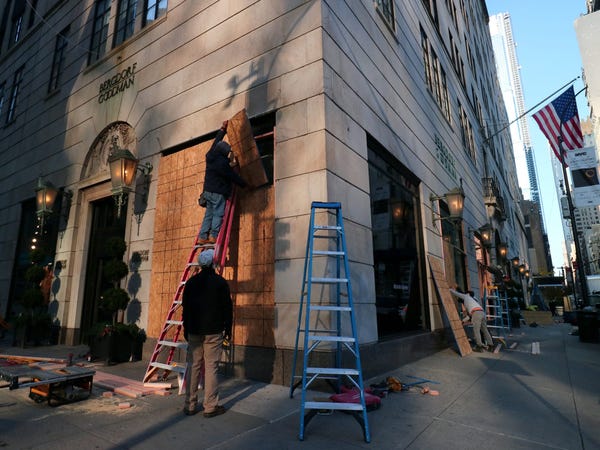 That's why some retailers are just focusing on flagship stores, like the Saks Fifth Avenue in Midtown Manhattan. 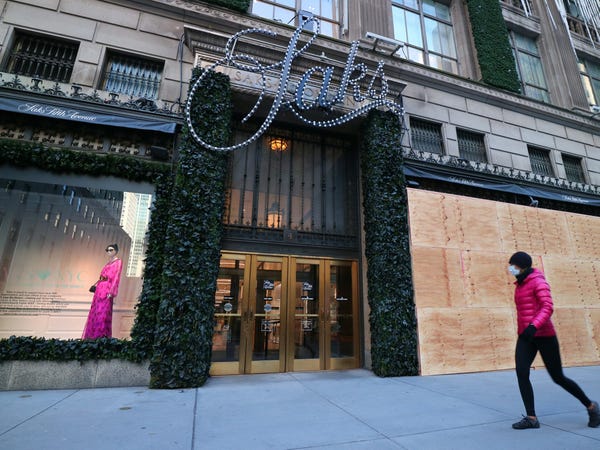 To the south in SoHo, Business Insider's Steven Tweedie discovered that Louis Vuitton stores were taking to metal sheets for protection. 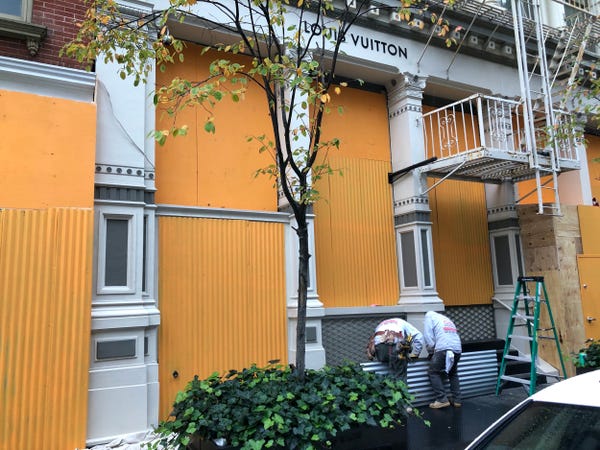 And unlike some of its competitors, Louis Vuitton opted for metal plates painted in its signature color.

Here's what the retailer's Michigan Avenue store in Chicago store looks like where police are trying to spread the message "don't loot in Chicago" as "officers will take action against anyone intent on spreading chaos," USA Today reported. 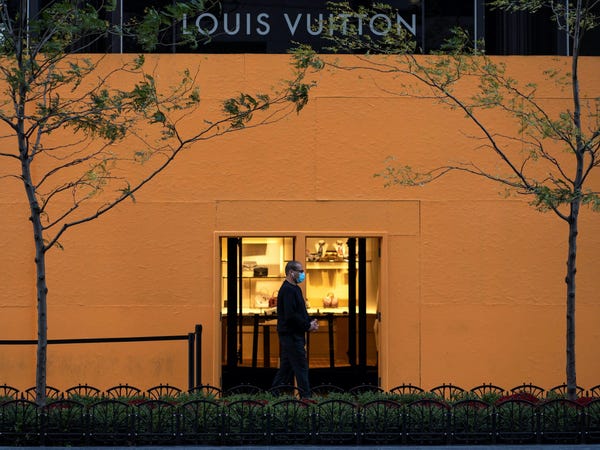 The phenomenon has even spread into the outer boroughs of New York as just across the river in Williamsburg, Brooklyn, Tweedie also noticed the Levi's Store boarded up. 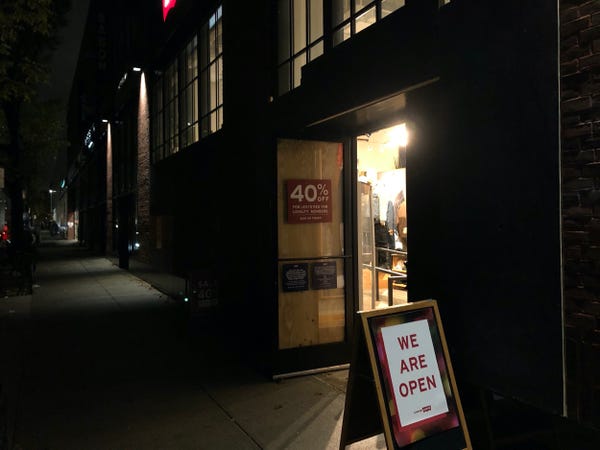 Brand-name retailers aren't the only stores affected as small businesses are also doing their best to protect themselves. 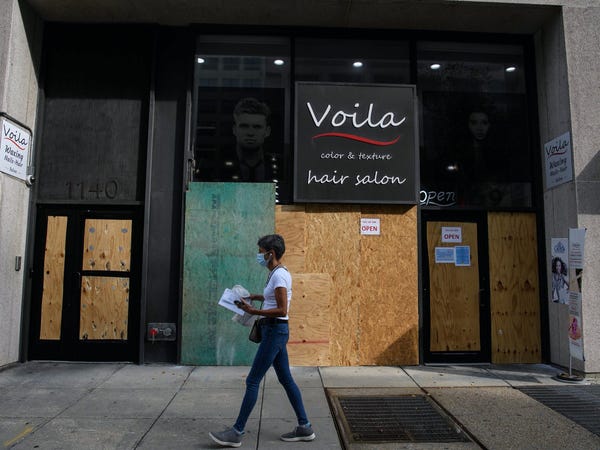 Small business owners in New York City, for example, are debating whether to stay open or close early; to fortify or take their chances; to hide their merchandise or to leave it as is. 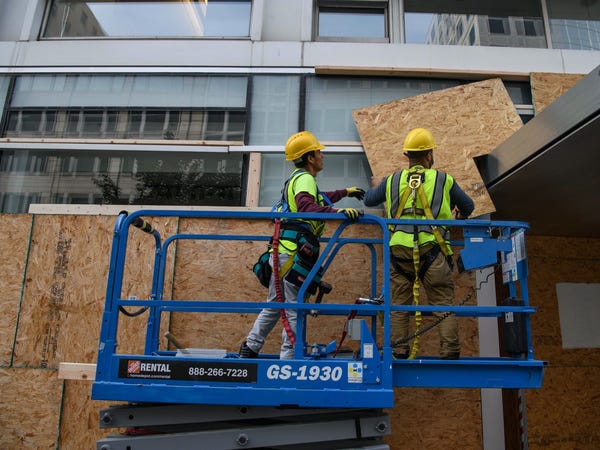 In Washington, DC, US government buildings surrounding the White House are also increasing their fortifications in preparation for Tuesday night. 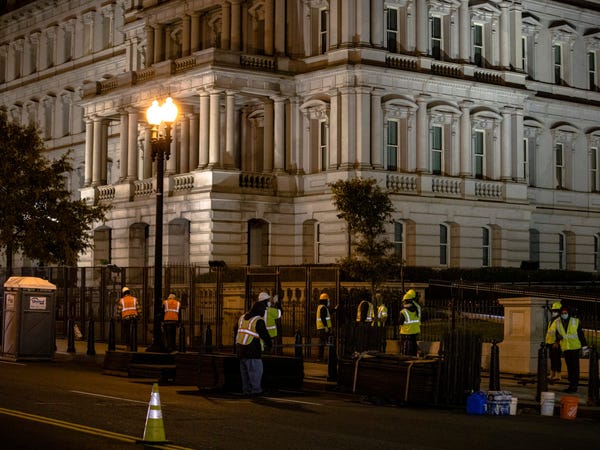 Access to the White House has been severely restricted with a non-scalable wall partially hiding the South Lawn and iconic South Portico. 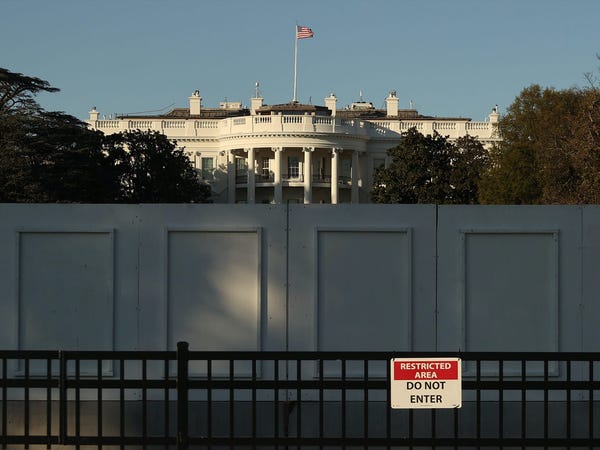 Related posts:
Hot News
China's Ant considers Paytm stake sale amid tensions with India: sources
Mortgage demand from homebuyers spikes 28%, and the average loan amount sets a record high
A startup that's taking a SaaS approach to selling digital-banking tech just nabbed $81 million from Goldman Sachs and other backers
Salesforce's Marc Benioff has become tech's top dealmaker, seizing the crown from his former boss Larry Ellison
See Ram's 702hp pickup that's taking on the Ford Raptor
EU proposes a plan to revive U.S. ties and work with Biden
Global Temperatures Already 1.2ºC Above Pre-Industrial Levels
Recent Posts
This website uses cookies to improve your user experience and to provide you with advertisements that are relevant to your interests. By continuing to browse the site you are agreeing to our use of cookies.Ok