The death of Queen Elizabeth’s husband of more than 70 years, Prince Philip, generated more Australian news articles than any “celebrity” death in the past year, research has found, and dwarfed weekend coverage of the nation’s vaccine rollout.

The UK’s national broadcaster BBC cancelled its regular programming on Friday (UK time) to air special coverage hosted by anchors, but received so many complaints about the non-stop updates that it had to create a special website page for viewers to raise concerns about the amount of TV coverage dedicated to the bereavement. 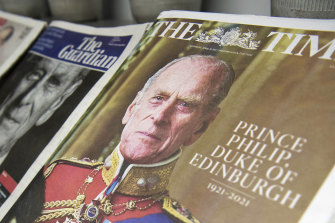 Prince Philip’s death has attracted headlines all over the world.Credit:AP

In Australia, local outlets dedicated a large proportion of their programming over the weekend to the news.

Data from media monitoring service Streem shows that a total of 2303 media items were created about Philip’s death between April 10 and April 11. By comparison, 843 items across television, radio and newspapers were about the vaccine rollout.

Streem’s media analyst Conal Hanna said Philip’s death has generated more coverage in Australian media than any other “celebrity” death the past 12 months.

“Prince Philip’s death diverted attention away from the vaccine rollout, which had been dominating the news cycle last week,” he said. “On the weekend there were approximately three times as many media items about Philip as the vaccine rollout.

“And looking at the prominence of stories online, Philip’s death spent four times as long at the top of major news websites as the vaccine program. It is the most media coverage generated by any death in the past 12 months, ahead of cricketer Dean Jones and football superstar Diego Maradona.”

ABC News broke its regular broadcasting schedule on Friday night to announce the death and ran extensive coverage over the weekend about Philip’s life, replacing its usual schedule with programs such as “When Phillip Met Prince Philip” – a documentary made in 2016.

Nine News provided dedicated coverage on the death through its news bulletin and flagship programs A Current Affair and Today. Nine television hosts Rebecca Maddern and Richard Wilkins hosted “royal experts” including royal journalists Camilla Tominey and Victoria Murphy commentator Dickie Arbiter on Saturday to discuss the news and a special 90-minute bulletin aired late in the afternoon. A Current Affair ran an hour-long episode hosted by Leila McKinnon to remember Philip’s life before a feature-length documentary ran at 8pm. Nine is the owner of The Sydney Morning Herald and The Age.

Seven West Media has also run coverage since news broke Friday evening (AEST), when it interrupted the AFL to inform viewers. It is incredibly unusual for an AFL game to be interrupted. The television broadcaster ran its morning show Weekend Sunrise until midday on Saturday as well as a special edition of evening news show The Latest special after its nightly news bulletin.

Network Ten ran live updates over the weekend and an evening special that looked at the marriage of Queen Elizabeth and Philip. On Sunday night it was planning to run a 90-minute obituary from UK’s Channel Five.

The Weekend Australian dedicated a special page to coverage of his death and led the paper with the news. News Corp Australia’s metropolitan newspapers such as The Daily Telegraph and The Herald Sun led their Saturday editions in the same way.