Heather Mercer, who was held hostage by the Taliban in 2001, describes her ‘terrifying’ arrest and trial and her eventual rescue by U.S. special forces.

The push by the Biden administration to bring tens of thousands of Afghan refugees into the U.S. is so far seeing support from many Republican lawmakers, with only a handful objecting to the move in response to the collapse of Afghanistan to the Taliban.

The Pentagon has said it intends to transfer 22,000 Afghan Special Immigrant Visa (SIV) holders to the United States, where they will be housed at three military bases. However, officials have acknowledged that that number could rise, and there are calls for that number to be increased dramatically.

“If we have to go more, higher than that, we will certainly do that,” Pentagon press secretary John Kirby said this week, referring to not only SIV applicants from Afghanistan but also their families. “We’re committed to their families as well.”

So far, those moves have full-throated backing from many Republicans, which is not unexpected given that only 16 Republicans in the House voted against expanding SIV visas by 8,000 in July.

In the Senate, Sens. Lisa Murkowski, R-Alaska, Jim Inhofe, R-Okla., and Bill Cassidy, R-La., signed onto a letter of 46 senators calling for a humanitarian parole designation for special groups of Afghan refugees including activists, journalists, parliamentarians and women leaders.

Sen. Joni Ernst, R-Iowa, told the Des Moines Register, “We have always been very welcoming to those that needed to immigrate and those refugees that were running away from disaster in their own country.

“And I do think that we can play a role and I think it’s important that we do that,” she said.

Utah Gov. Spencer Cox, meanwhile, wrote to Biden saying his state is “eager” to assist with the resettlement of Afghan refugees, while Georgia Gov. Brian Kemp said his state was open to accepting refugees.

That openness was shared by GOP leadership as well.

“We need to care for them,” Senate Minority Leader Mitch McConnell said on Tuesday, according to The Washington Post. “We owe it to these people, who are our friends and who worked with us, to get them out safely if we can.”

Former President George W.  Bush said in a statement that the government “has the legal authority to cut the red tape for refugees during urgent humanitarian crises.”

“And we have the responsibility and the resources to secure safe passage for them now, without bureaucratic delay,” he said.

Former President Trump, who has been criticized by his opponents for his hardline stances on immigration and asylum, put out a statement that seemed to welcome refugees to the U.S.

“Can anyone even imagine taking out our Military before evacuating civilians and others who have been good to our Country and who should be allowed to seek refuge?” Trump said on Monday.

However, the push to resettle Afghan refugees, whether it be those who apply specifically through the SIV process or a broader acceptance of refugees at large, has raised concern from some conservative commentators and immigration hawks.

Former White House adviser Stephen Miller warned that the U.S. would have limited ability to vet refugees now that the government apparatus has fallen, and said it would be significantly cheaper to resettle refugees in other countries in the region, like Pakistan. 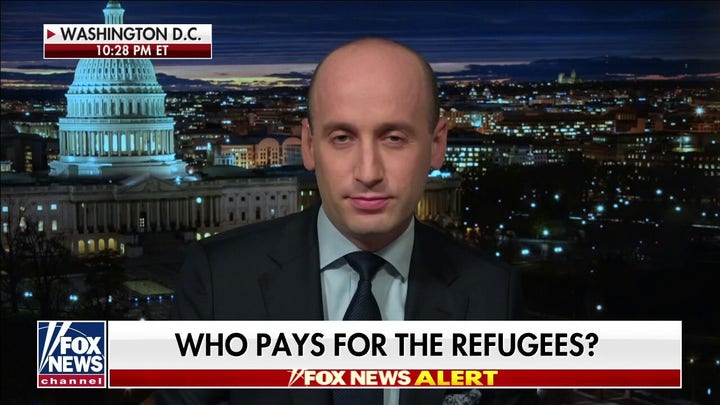 “Those who are advocating mass Afghan resettlement are doing so for political, not humanitarian reasons,” he said on “The Ingraham Angle.”

Meanwhile, commentator Ann Coulter objected to the argument that the U.S. was rewarding those who had helped the U.S. during the conflict.

“There seems to be some confusion about who was helping whom here. Our Afghan allies’ were not helping us. The Taliban weren’t in Iowa,” she wrote. “We were helping them.”

So far, there has only been a handful of lawmakers who have opposed welcoming Afghan refugees in the country.

“The chaos we’re seeing is not an excuse to flood our country with refugees from Afghanistan,” Rep. Matt Rosendale, R-Mont., said.

Meanwhile, Rep. Marjorie Taylor Greene, R-Ga., tweeted that “all Afghan refugees should be held elsewhere and vetted right now, NOT given direct entry into the U.S.”

On Wednesday, Rep. Tom Tiffany, R-Wis., expressed concern about the plan to bring refugees to his state, saying the administration had “declined to elaborate” on the plan.