Uncleared toilet tanks on planes and no worker immediately on hand to pump out the waste. Passengers claiming they were offered latex gloves to eat warm food after no cutlery was loaded onto the aircraft. Broken seats, lost luggage, two-hour, three-hour, four-hour delays.

These are not the woes of a budget airline, rather this is the situation for customers of Australia’s premier airline Qantas as people flock back to airports amid a post-COVID travel surge. 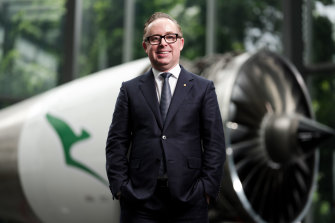 Qantas has faced severe criticism from its customers after hundreds of thousands of Australians arrived at airports around the country only to face significant delays, cancelled flights and a type of disorganisation that is usually associated with unforeseen weather or political events – not the Easter holidays.

Many travellers took to social media to share their frustration with the company and its longstanding and handsomely remunerated boss Alan Joyce. In response, Joyce explained the delays were caused by staff shortages due to COVID and customers “not being match fit” for travel.

As The Sydney Morning Herald and The Age revealed this week, Qantas was even forced to send SOS messages to its pilots in fear they would not be able to staff three international flights. The airport operators also apologised, saying the delays at screening were due to security guards calling in sick and one in three passengers required to have their bags rechecked.

At the same time, the airline’s frontline woes have barely moved the dial with investors or analysts who saw full airports and huge demand for travel and future profits. Analysts contacted by The Age and the Herald for this story were themselves getting ready for holidays. “I haven’t put out a note to my clients,” says one, indicating that in the sharemarket world, Qantas’ problems are barely a news event. Qantas’s shares were even up 7 per cent on Thursday as the market cheered the demand from travellers.

But aviation industry veterans say something has gone horribly wrong at the airline which had already added extra capacity and was selling huge numbers of tickets over Easter, a period that is notoriously busy.

Joyce and Jetstar boss Gareth Evans were trumpeting their April sales figures in a call with analysts in February. “We are well above the pre-COVID level of bookings for that April to June quarter,” Evans told analysts according to a transcript of the call obtained by this masthead.

Qantas chairman Richard Goyder, who is seen as a big supporter of Joyce, is not downplaying the airline’s problems which could continue as Qantas prepares for a bumper weekend with 500,000 people travelling on 4600 flights.

“The board is very conscious of what is going on and are in close contact with senior management,” he told The Age and Herald over text message this week. 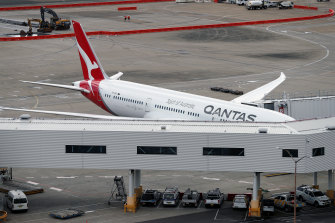 “We are all over it, but it’s not a quick fix, the challenge is managing to get as many people flying as we can and as happily as we can.”

Joyce told the media this week the company had received clarification that staff at passenger airlines would now be exempt from close contact definitions like their freight colleagues. Meanwhile, about 100 middle managers from Qantas HQ will be working double shifts on the frontlines at airports over the Easter period to help out. And Jetsar is using its larger planes usually reserved for overseas flights on shorter domestic routes.

The Business Council of Australia even threw its support behind the industry, urging customers to be patient in a Thursday press release. “Despite national recruitment efforts, the workforce at some airports is 40 per cent lower than pre-pandemic levels and small businesses in our cities and regions are crying out for workers,” the association’s president Jennifer Westacott said.

But some industry veterans question whether the dominant airline in Australia should be in “tie it up with wire” mode to keep its show on the road. “Why were they not prepared?” asks one former Qantas executive, who declined to be named for this story for employment reasons.

“They knew they had sold well, they knew they had increased capacity. They should have had training in place for their staff who had not been working during the past two years. It’s a real shame.

“In one way it’s fantastic that people want to travel again and demand is that high, but it’s also terrible to see these scenes at the airports caused by a lack of preparedness.”

Another aviation industry veteran who asked not to be named for professional reasons said there was no question the past few years had been incredibly difficult for the industry, Joyce and his team – some of whom were loading baggage this week to try and fill worker absences.

“I would also say that in any business you never bad mouth your customers,” the executive says pointing to Joyce’s remark to disgruntled passengers.

Yet despite some suspected missteps this week, Joyce still appears to be going strong.

He and his team are regarded in the investment market as some of the best in a business that has been marked by failure and deep stress over the past two years. Qantas is now hunting profits at a time when other airlines around the world and in Australia are still getting back on their feet. And Qantas and Jetstar dominate the travel-hungry Australian market.

But Joyce has been in the position for 14 years and there are several keen executives waiting in the wings. The airline’s chief financial officer Vanessa Hudson directly flagged her interest just last month. While Joyce has long said he wants to see out Qantas’ ultra-long-haul flight program Project Sunrise, there are murmurs he might look to retire in the next 12 months.

Another former Qantas executive says it is unbelievable that Joyce can shake off problems that would put any other executive under pressure. “He is Teflon. Who else would get away with this?” the executive quips. “I wonder whether this chairman will support him as much as the last one.”